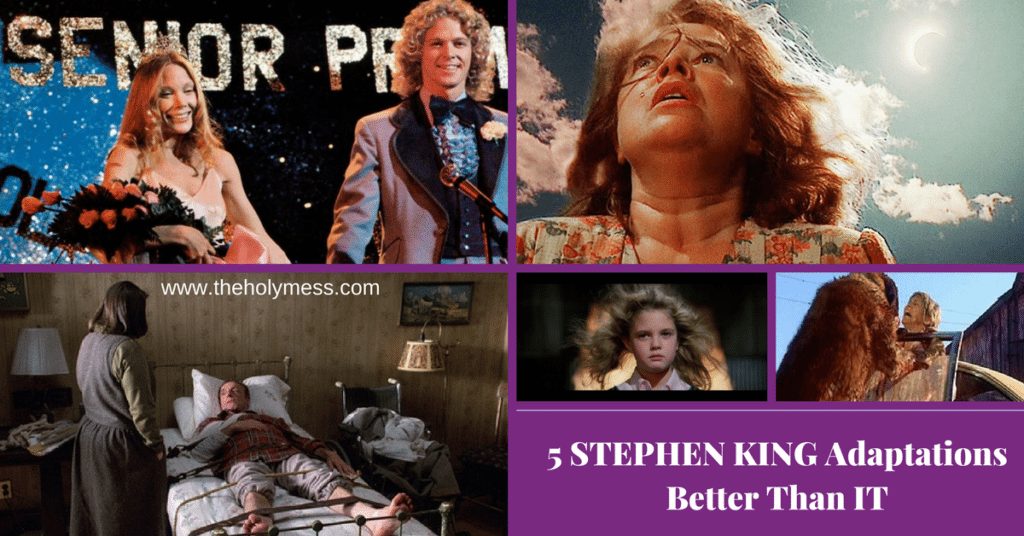 Many of you may have seen my previous blog warning parents about the content of IT. Never in my life did Sara or I anticipate the record breaking numbers and comments this blog and my Facebook posts produced.

As a movie-goer, I was also disappointed that the film just wasn’t scary to me.

But I wasn’t scared once, and there’s a big difference.

As response to those who thought my views about IT were for the birds (oh, wait – that was Hitchcock!), I present to you my thoughts on 5 Stephen King Adaptations Better Than It.

As always, I recommend that parents view any of these titles before showing them to their children, not necessarily because of the “scariness” per se but because of some of the other themes and content involved.

In an effort to concentrate on King’s works of horror, I am choosing not to include films such as THE SHAWSHANK REDEMPTION

and STAND BY ME,

which are more mainstream dramatic works.

To provide proof that I’m not a “horror hater”, here are some scary movies from the mind of Stephen King that I recommend, listed chronologically by release date.

5 Stephen King adaptations better than IT

Withdrawn and sensitive teen Carrie White faces taunting from classmates at school and abuse from her fanatically pious mother at home. When strange occurrences start happening around Carrie, she begins to suspect that she has supernatural powers. Invited to the prom by the empathetic Tommy Ross, Carrie tries to let her guard down, but things eventually take a dark and violent turn.

I watched CARRIE again not too long ago and found it very rewatchable if obviously a bit dated. One of the few horror films respected enough to earn attention from the Academy Awards, both Sissy Spacek as the titular character and Piper Laure as her religious fanatic mother received Oscar nominations.

On a superficial level, CARRIE is total retribution for those of use who ever got picked on as a kid and those of us who daydreamed about revenge on those who made our already difficult young lives that much harder. Of course, hindsight makes us realize most of what happened to us when we were young seemed a lot more dramatic then; however, it can’t but leave a little scar damage and impact part of who were are as we get older.

I also think this film is among the most relatable of Stephen King’s film adaptations. Most of us either felt like Carrie during our high school years or knew someone like her. Maybe both. It encapsulates all the horror of growing up in the most extreme ways – Carrie’s introduction to menstruation is basically a short horror film in itself, and her dysfunctional relationship with her mom is something to which all of us can relate.

P.S. Don’t bother watching the 2013 remake. Despite a few updates, it’s basically the exact same story with none of the magic, although Julianne Moore is quite good as Carrie’s mother.

When sweet St. Bernard Cujo is bitten by a bat, he starts behaving oddly and becomes very aggressive. As Cujo morphs into a dangerous beast, he goes on a rampage in a small town. Stay-at-home mom Donna gets caught in Cujo’s crosshairs on a fateful errand with her son Tad. Stuck in their tiny car, Donna and Tad have a frightening showdown with the crazed animal.

I typically enjoy Stephen King’s stories the most when they delve into the fear of reality – things that could actually happen. I am typically sensitive to films that show children in danger, but the strength of the mom in this film certainly compensates.

In fact, I think Dee Wallace Stone’s performance here is one of the more underrated turns in a Stephen King film. Released the year after E.T. THE EXTRA TERRESTRIAL, this is a more difficult role and she delivers.

Actually, when you stop and think about it, King’s female characters are often more well-written and three-dimensional than the man, something rare in this genre.

I particularly admire how the filmmakers shot the scenes of the mom and child trapped in the car. You feel a real sense of the claustrophobia and desperation involved. This film might push over the edge anyone with a fear of big dogs, but the tension and suspense are certainly palpable. Plus, you have to love any film that essentially celebrates a mother’s love for her child, even risking death.

As youths, Andy McGee and his future wife Vicky participated in secret experiments, allowing themselves to be subjected to mysterious medical tests. Years later, the couple’s daughter Charlie begins to exhibit the ability of setting fires solely with her mind. This volatile talent makes the youngster extremely dangerous and soon she becomes a target for the enigmatic agency known as “The Shop.”

Honestly, I’m not going to spend a lot of time trying to seriously defend this movie. Truth be told, it’s not all that great, particularly because of the overwrought performances by an admittedly stellar cast. You could refer to this as an 80s Guilty Pleasure for me.

I was in my early teens when this came out and starting to realize my true love of the movies. This was an HBO staple, along with more friendly family fare like SAVANNAH SMILES

(why doesn’t anyone talk about THAT movie anymore???) and more juvenile comedies like REVENGE OF THE NERDS

(which, while certainly not for kids, is actually a well made movie).

Anyway, it’s cheesy fun to watch a young girl be able to start fires with her mind. Watching it now, it’s fascinating to notice similarities with STRANGER THINGS

, the Netflix series which fondly remembers 80s horror, this film being one of the bigger examples.

And whatever little happened to little Drew Barrymore? She went nowhere, didn’t she? (Sarcasm)

After a serious car crash, novelist Paul Sheldon is rescued by former nurse Annie Wilkes, who claims to be his biggest fan. Annie brings him to her remote cabin to recover, where her obsession takes a dark turn when she discovers Sheldon is killing off her favorite character from his novels. As Sheldon devises plans for escape, Annie grows increasingly controlling, even violent, as she forces the author to shape his writing to suit her twisted fantasies.

What’s good in MISERY is so good that one tends to leave the theater thinking it’s a better movie that it actually is. That being said, one can’t deny that the majority of the film is extremely effective, and Kathy Bates’ Oscar-winning performance has practically become legendary.

I wish director Rob Reiner had been a bit grittier with the material. It tends to have a little too much Hollywood gloss covering it. The ending is a let-down, yet another standard fight to the death and the inevitable moment when the person believed to be dead suddenly jumps back to life.

All that being said, the sight of Kathy Bates popping out of nowhere, illuminated by a flash of lightning. Well, that’s something that would have made Hitchcock proud!

In a small New England town, Dolores Claiborne works as a housekeeper for the rich but heartless Vera Donovan. When Vera turns up dead, Dolores is accused of killing her elderly employer — so her estranged daughter Selena, a well-respected New York City journalist, decides to visit her mother and investigate the matter for herself. As Selena digs deeper into the case, she uncovers shocking truths about the murder and her own childhood.

This is easily the most underrated of Stephen King’s film adaptations and actually one of my favorite films of the 1990s. As good as Kathy Bates was in MISERY, her performance here as the titular character far surpasses it, and she is supported by a really great cast including Oscar nominees Jennifer Jason Leigh and David Strathairn.

While probably more psychological drama than actual horror film, the events portrayed are so disturbing and horrific that I’ll let it slide.

There are some themes here similar to themes in IT to which I so vehemently objected. The obvious question is why do I consider one a modern classic and the other an overblown mess. I feel that DOLORES CLAIBORNE handles the issues in a much more mature, objectified manner rather than using them as a simple plot device. The handling here was more artistically done.

What are your favorite Stephen King movies? If you say IT, I’ll still welcome you as a reader – wink wink nudge nudge

13 Reasons Why: Should Your Teen Watch? 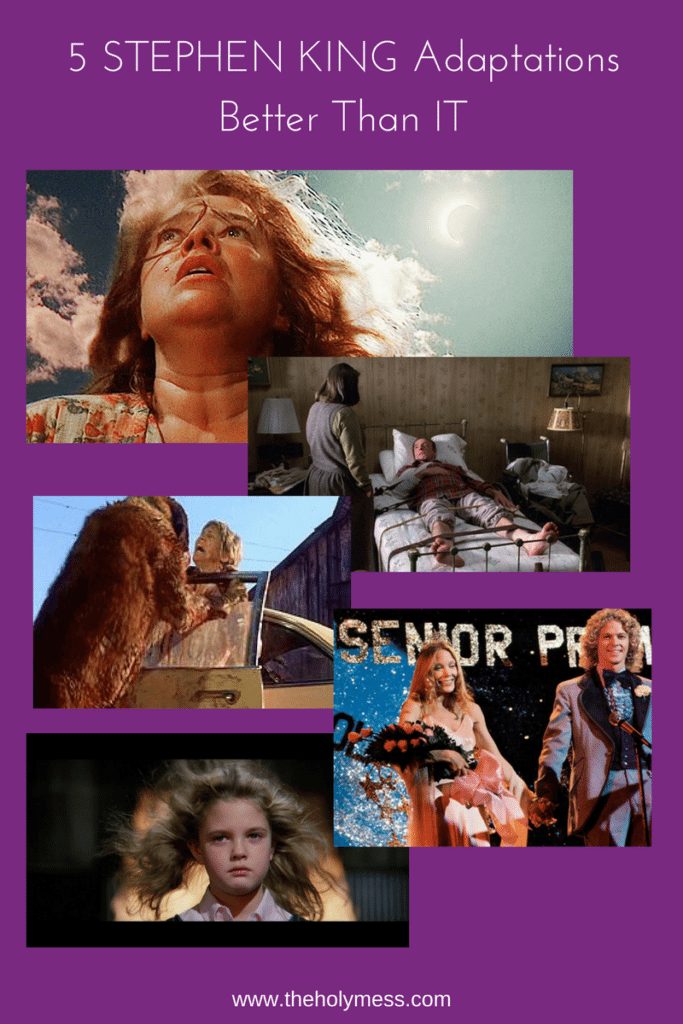