Merry Christmas everyone! The kids are on Christmas vacation, perhaps you have a few days off from work, the weather outside is frightful…

It’s time to light a fire and gather around the television for some family binge watching. 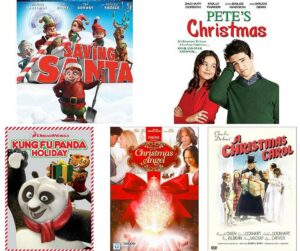 Here is my Christmas present to you! These are some of the best and worst Christmas movies currently on Netflix. I am giving you a few recommendations – and programs to avoid – to make your holiday a little merrier and brighter. So, turn on the tube, grab some popcorn, and enjoy…

Click on the title to go to the official site for a more detailed review, pictures, and other fun stuff!

The Best (and Worst) Christmas Movies Currently on Netflix 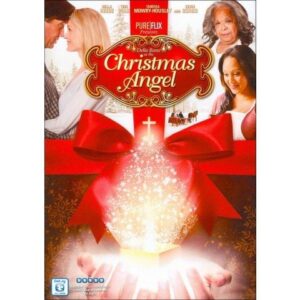 Christmas Angel can be purchased at target.com or viewed currently on Netflix.

Writing anything negative about a movie like this, especially during the season of peace and love, is like pulling off a puppy dog’s ears. Christmas Angel is basically a Hallmark movie crossed with TOUCHED BY AN ANGEL and a sprinkle of HIGHWAY TO HEAVEN while Julie Andrews herself kisses your forehead and sings you a lullaby. It has a wonderful message and a heart as big as Della Reese’s hair; unfortunately, it’s not really all that great.

There’s a lot going on here – single parenthood, bullying, cancer, kidney transplants, parent/child estrangement, foster kids, and tabloid journalism. A couple storylines could have definitely been dropped to tighten everything up – it definitely feels longer than its 98 minute running time. That being said, the movie’s message is delivered beautifully, and it’s not afraid to preach the reason for the season, which itself is cause for celebration.

Younger teenage girls would be the target audience for this film, and of course the STEEL MAGNOLIAS crowd. I can forgive a lot if I get the requisite lump in the throat or tear in the eye at the end. Unfortunately, it didn’t happen this time. But a definite A for effort! 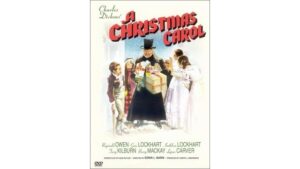 A Christmas Carol, black and white, available at bestbuy.com, or currently streaming on Netflix.

Perfection! I was sure this Charles Dickens’ classic has probably had more cinematic incarnations than any other book ever written. (I was wrong. According to Google, the correct answer is CINDERELLA, but you catch my drift.)

This rendition of A CHRISTMAS CAROL is the best I’ve seen, hands down. I’m sure you’ve heard the phrase “they don’t make ‘em like they used to.” This film is proof positive that statement is correct. Incredibly moving, shot in gorgeous black and white, this is straightforward storytelling, no bells and whistles.

The story speaks for itself, and what a story it is! Scrooge has always seemed a character of the ages, even though the novel itself was written relatively recently in 1843. This is an ideal film to watch on Christmas evening once dinner is done and everyone is relaxing around the fire like a Norman Rockwell painting. 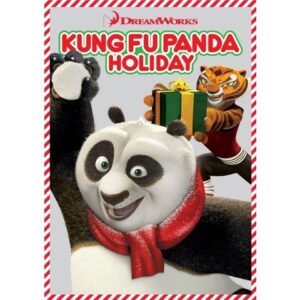 I have never seen a KUNG FU PANDA movie. Maybe this would have made sense if I had. As it is, if you asked me at gun point to tell you the plot or the point, I couldn’t do it. The editing and animation were alternately impressive and headache inducing – as if a hyper child with ADHD was in charge of the production. I think I heard the word “holiday” two or three times but beyond that I discerned no Christmas theme. The good news it’s only 26 minutes, so if your children are KUNG FU PANDA fans, you’ll survive. 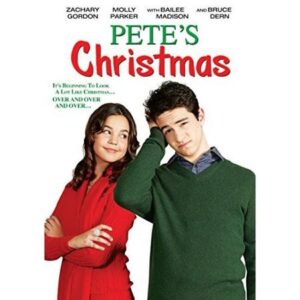 Watch Pete’s Christmas, currently on Netflix, or purchase at walmart.com.

I was really hoping to find an undiscovered gem while going through all these Christmas shows for the blog, and fa-la-la-la-la, PETE’S CHRISTMAS is it! I had never heard of this movie in my life, had no clue it existed, but this is a wonderful family film that I think will entertain pretty much any age group.

The premise is pretty simple. Poor Pete is suffering from middle child-itis, he makes Jan Brady look well-balanced by comparison, and he is having the worst Christmas ever. His parents ignore him, his siblings hate him, the town bullies have a field day with him – you get the idea. Well, before you can say GROUNDHOG DAY, Pete finds himself re-living the same day over and over again, and he gradually learns to take this opportunity to change his life and the lives of those around him.

I was pleasantly surprised how charmed I was by this movie, and by the end I had bit of a lump in my throat, which is a good sign. As I mentioned previously, it’s derivative of GROUNDHOG DAY, almost to a fault, but if you’re going to copy a movie, you might as well make it one of the great comedies of the 1990s! I highly recommend spending time with Pete this Christmas.

Even though it’s PG, I found absolutely no questionable material, nothing offensive at all. In fact, I think you’ll walk away from the TV with a big smile on your face! 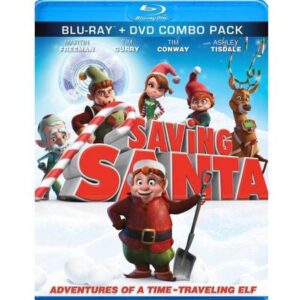 Watch Saving Santa, currently on Netflix, or purchase at walmart.com.

SAVING SANTA is absolute torture! I actually turned it off after 45 minutes. I couldn’t bear another second. There were better things I could be doing like scraping the dead skin off of my heels. The incomprehensible plot of this animated fiasco revolves around villainous Nevil Baddington trying to steal the time globe on Santa’s sleigh for his mother’s delivery service. No, I’m not making this up.

Poop shoveling Bernard D. Elf, who longs to be an inventor at Santech, Santa’s headquarters, is out to stop him and save Christmas. Tim Conway from The Carol Burnett Show is a comic genius but an uninspired choice to voice Santa. The songs are forgettable, the animation mediocre, and not even Scrooge himself wants to watch Old Saint Nick being kidnapped and tied up using Christmas lights. The only saving grace is listening to the accents of such English thespians as Tim Curry and Joan Collins. Nothing like a good British accent!

Jeff is a musician, humorist, gardener, and uncle. Jeff is Sara’s cousin, life-long dear friend, and “Uncle Oscar” (our nickname for him because of his love of all things movie) to Sara’s kids. Our lives have been intertwined in the most blessed way.