Freedom Writers is a movie about a dedicated teacher in a racially divided Los Angeles school has a class of at-risk teenagers. Read on for our Freedom Writers movie review and free discussion worksheet. Use this worksheet with your children, classroom, or homeschool to facilitate learning. 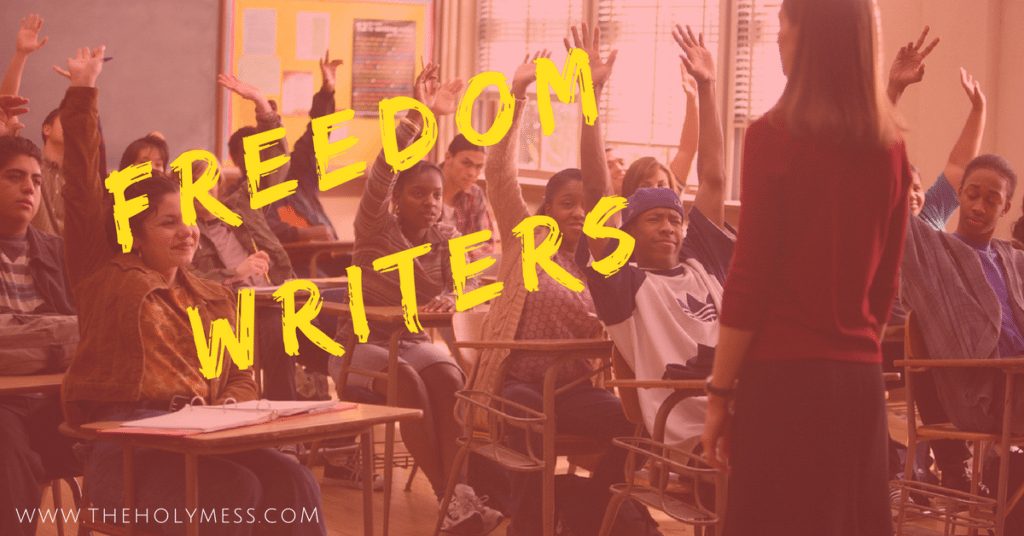 In a nutshell: A dedicated teacher in a racially divided Los Angeles school has a class of at-risk teenagers deemed incapable of learning. Instead of giving up, she inspires them to take an interest in their education and planning their future, much to the consternation of her fellow teachers as well as her family. 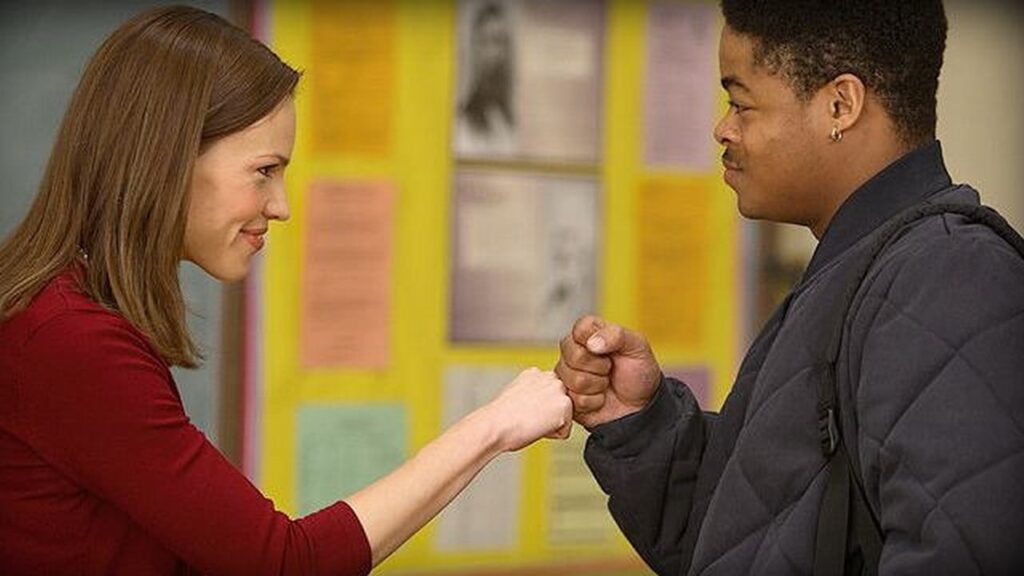 It’s virtually impossible to leave a movie like FREEDOM WRITERS without being at least somewhat moved and at least halfway certain you’re going to go out and make a difference in the lives of everyone you meet.

In spite of its flaws, and there are many, this movie has gumption and heart and good old-fashioned spunk. But, as Lou Grant famously told Mary Richards, “I hate spunk!”

FREEDOM WRITERS is based on the true story of a first time teacher who lands a job at a once highly esteemed high school that has been inundated with racial tensions and gang violence. The movie open with Erin Gruwell, played by Oscar-winner Hilary Swank, meeting with the head of the English department, bright-eyed and bushy-tailed and ready to change some lives and teach some Homer.

Before you can say DANGEROUS MINDS, she walks into a classroom full of gang members, druggies and every minority stereotype you can imagine, and she quickly begins to question whether she has made the right decision to teach at Woodrow Wilson High School.

The rest of the film follows her attempts and eventual success in not only teaching them but changing their lives. Suffice it to say, if you’ve seen MR. HOLLAND’S OPUS or MUSIC OF THE HEART or TO SIR WITH LOVE, you’ll be able to guess where this film is heading after the first 20 minutes.

There is a lot to like in FREEDOM WRITERS, and I admittedly got teary-eyed not once but twice, which is very rare for me. I was particularly moved by a section of the film during which Mrs. G, as she becomes known, introduces her students to “The Diary of Anne Frank”.

That being said, I’m reviewing the film itself, not the good intentions it portrays, and I’m afraid it’s a mixed bag at best. 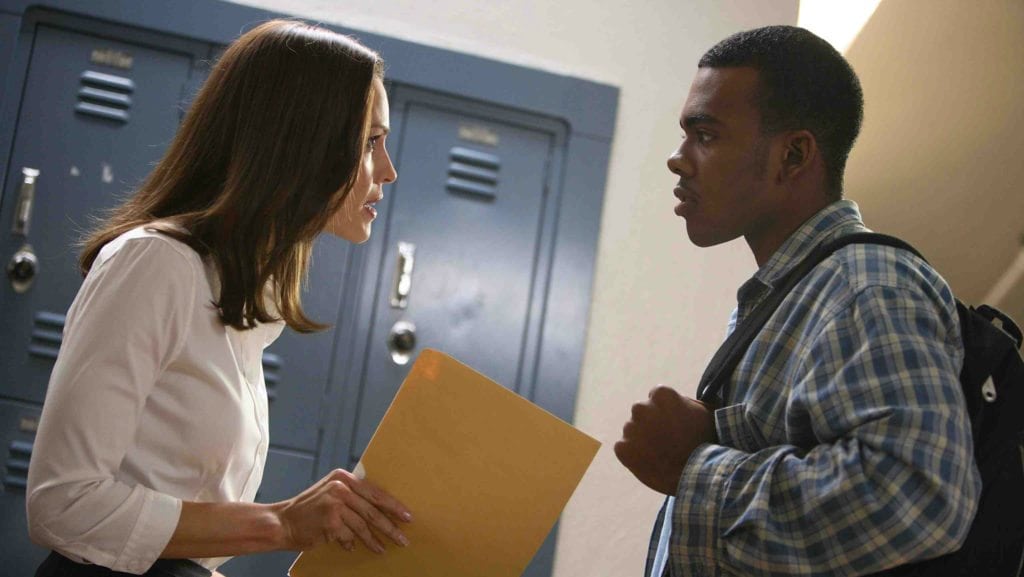 Mario is one of Hilary Swank’s students in FREEDOM WRITERS. © 2007 Double Feature Films − All right reserved.

Swank is an actress who needs a really great script and really great direction to succeed, such as her Oscar-winning performance in BOYS DON’T CRY and the underrated THE HOMESMAN. Here she seems a bit lost, and the performance becomes a bit one-note. The script doesn’t help much, as it turns Erin Gruwell into a flawless creature – you can almost see the halo resonating above her tailored business suits.

I immediately thought of MUSIC OF THE HEART, with which this film shares many similarities; however, Meryl Streep’s teacher in that film was three-dimensional, often irritating and obstinate in spite of her good intentions. Swank’s teacher here literally can do no wrong.

Even worse are the horribly underwritten, sometimes laughably bad supporting characters. The other teachers in the English department are such stock villainous characters, they practically do everything but twirl their oily handlebar moustaches. Imelda Staunton’s Mrs. Campbell appears to have a moment of redemption, but it is immediately forgotten in the next scene.

Patrick Dempsey is utterly wasted in a thankless role as Erin’s neglected husband. The whole subplot involving their marriage could easily have been extracted, and the last 20 minutes or so lose steam and seem to only exist to be able to provide an uplifting ending.

All that being said, this would actually be a good film for parents and children to watch together. Issues of gang violence, race relations and the importance of learning and education would be wonderful discussion points, particularly for younger teenagers. In fact, below you will find a worksheet that could provide a starting point for some good back and forth.

While not an all-out failure, I can’t help but feel ultimately disappointed because this material had so much potential and, in the right hands, could have been a truly memorable endeavor. Instead we’re left with MARY POPPINS mixed with a little Tupac. 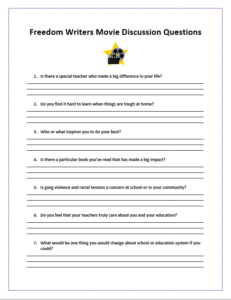 Use our free discussion guide to facilitate discussion with your kids, classroom, or home school.

On the last Monday of each month, a group of bloggers participate in a #MovieMondayChallenge, hosted by C’mon Get Crafty! We decide on a topic, genre, or specific movie to use for inspiration and everyone gets free reign to create something wonderful!

Now let’s see what everyone else was inspired to create for this month’s #MovieMondayChallenge!! If you’d like to join our Facebook group, you can request an invite here. 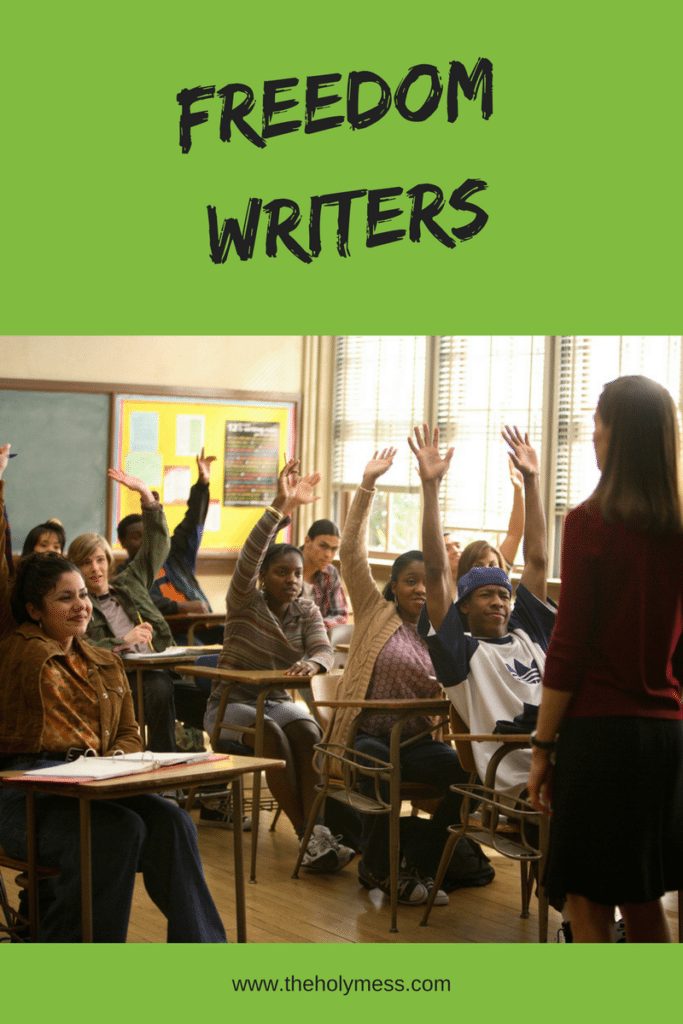