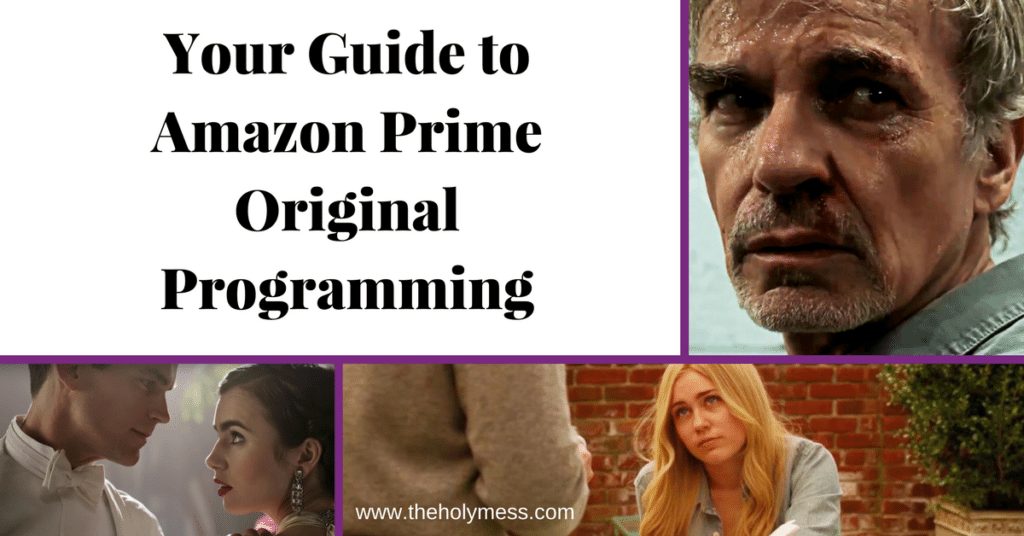 Last week I shared with you a guide to some of the many original films and series currently offered on Netflix. Today’s I give you Your Guide to Amazon Original Programming, for those of you who are Amazon Prime

subscribers. (If you are not yet an Amazon Prime subscriber, click here.)

Like before, I chose a handful of programs to highlight in this guide. I have not seen these programs and am not giving them an endorsement. Instead, I am including a trailer (when available), a brief synopsis, and current critical reaction to hopefully help a little bit in making your decisions for what to watch.

Share your favorites! In the comments below, tell us Amazon Prime programs that you have seen and recommend.

In no particular order, here are some original programs to consider for your next binge session.

WARNING: Some of these trailers are for mom and dad shows only and contain rough language and adult situations. I include these so you may make viewing decisions ahead of time as to what will be appropriate for the whole family and what would be more appropriate to watch after the kids go to sleep.

SYNOPSIS: Once a powerful lawyer, Billy McBride is now a washed up ambulance chaser, who spends more time in bars than the courtroom. When Billy reluctantly agrees to pursue a wrongful death lawsuit against the massive law firm he helped create, a vast and deadly conspiracy comes to light. Billy and his team end up in a life-or-death trial against the ultimate foe, which could end up helping Billy find redemption and exact revenge on the firm.

CRITICAL REACTION: Currently 77% on Rotten Tomatoes and 65% on Metacritic

SYNOPSIS: This dark comedy is inspired by events in comic Tig Notaro’s life. Starring as a Los Angeles-based radio host of the same name, Tig is still dealing with serious health issues, including recovering from a double mastectomy. When her mother becomes gravely ill, Tig returns to her hometown in Mississippi, where she is forced on a painful (and at times, hilarious) journey that unearths uncomfortable truths about herself and her family. In order to heal, both physically and emotionally, Tig must reconnect with her roots before moving forward.

CRITICAL REACTION: Currently 93% on Rotten Tomatoes and 77% on Metacritic

SYNOPSIS: Marius is a con man who tries to leave his old life behind by assuming the identity of his cell mate, Pete. While Pete’s family doesn’t have reason to suspect that he is not their long-lost loved one, they are a colorful group with their own secrets and lies that could make life as dangerous as the world Marius was hoping to escape. Marius must find a way to keep his lies from backfiring as he deals with unexpected situations that come his way.

CRITICAL REACTION: Currently 100% on Rotten Tomatoes and 77% on Metacritic

SYNOPSIS: To prevent Iran from going nuclear, intelligence officer John Tavner must forgo all safety nets and assume a perilous “non-official cover” — that of a mid-level employee at a Midwestern industrial piping firm.

CRITICAL REACTION: Currently 83% on Rotten Tomatoes and 68% on Metacritic

SYNOPSIS: This adaptation of F. Scott Fitzgerald’s final unfinished novel is set in 1930s Hollywood, an era darkened by the Depression and the growing influence of Hitler. The series centers on Monroe Stahr, a handsome and talented studio executive whose career is on the rise. As Stahr struggles to gain a firm foothold in the movie industry and bring his cinematic visions to life, he must navigate a power struggle with Pat Brady, his boss and mentor.

CRITICAL REACTION: Currently 53% on Rotten Tomatoes and 57% on Metacritic

SYNOPSIS: In the thick of 1980s Cold War hysteria, the Romanian government created “Comrade Detective” to help promote Communist ideals and inspire a deep sense of nationalism in the country’s residents. In the gritty police drama, detectives Gregor Anghel and Iosef Baciu investigate the murder of a fellow officer and, in the process, unravel a plot to destroy their country. Fueling that conspiracy is Romania’s greatest enemy — capitalism. The series was forgotten about after the fall of the Berlin Wall, but it has been rediscovered and digitally remastered to be seen by modern viewers. Now, though, the heroes’ dialogue has been dubbed, with their voices provided by Hollywood actors Channing Tatum and Joseph Gordon-Levitt.

CRITICAL REACTION: Currently 82% on Rotten Tomatoes and 67% on Metacritic

SYNOPSIS: A man uses a pair of virtual-reality glasses to have an affair with a hologram of his buddy’s girlfriend.

CRITICAL REACTION: Currently 62% on Rotten Tomatoes and 58% on Metacritic

SYNOPSIS: When their house mate is hauled off to prison, three Republican senators sharing a row house in Washington, D.C., find themselves in need of a new boarder. Enter Florida freshman Andy Guzman, who joins the guys as they battle primary challenges, party filibusters and the possibility of a junket to Afghanistan. Gil John Biggs suddenly finds himself facing a real opponent in a primary, which means he may actually have to do something — like go to Kabul, where a group of soldiers from his North Carolina district has just been deployed. Louis Laffer is facing a challenge of his own, but his opponent is questioning Louis’ manhood while playing up his own rugged outdoorsman persona in Nevada. Robert Bettancourt, the gentleman from Pennsylvania, suddenly finds he’s about to be indicted. Meanwhile Andy brings a gorgeous “contributor” to check out his new bedroom.

CRITICAL REACTION: Currently 72% on Rotten Tomatoes and 68% on Metacritic

SYNOPSIS: From the creator of Downton Abbey. Dr. Thorne lives a quiet life with niece Mary in Greshambury, home of the wealthy Gresham family. Unbeknownst to others, the Greshams have lost their fortune and matriarch Lady Arabella has a scheme to regain it via an arranged marriage with her son and an American heiress. However, her son plans to elope with Mary, which complicates Lady Arabella’s plans.

CRITICAL REACTION: Currently 92% on Rotten Tomatoes and 64% on Metacritic

SYNOPSIS: During the turbulent 1960s, an American family receives a visitor who changes everything. Created by Woody Allen.

CRITICAL REACTION: Currently 18% on Rotten Tomatoes and 44% on Metacritic