Home » Family » Movies » The Best & Worst of Brad and Angelina 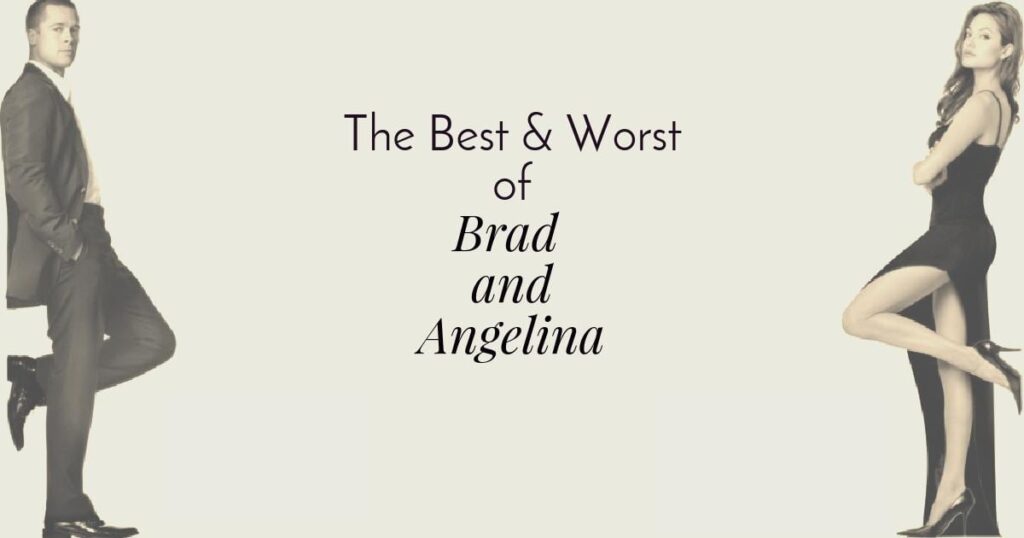 How are you holding up? No, seriously, you can be honest. I know this has been a horrible week.

The tabloids have been predicting this day would come from the second they announced their relationship, and it finally happened.

Yes, after a decade together and a Brady Bunch-worthy house full of children, Brad Pitt and Angelina Jolie have called it quits. Not since Liz Taylor and Richard Burton has America been so enraptured with a celebrity couple.

And not to make light of their ordeal, but it happened at a perfect time, because I had some serious writer’s blockness going on. I couldn’t think of ANYTHING to write about this week. As always, Brangelina, even in their moment of peril, have saved the day.

Today, I have decided to take a look back at some of Brad and Angie’s best and worst moments on screen. Truth be told, I am a movie lover, not a celebrity fanatic, so what happens off screen really doesn’t interest me that much. What counts with me are the golden moments that happen up there on the silver screen.

Both Brad Pitt and Angelina Jolie are often underestimated as talented actors because of their dazzling good looks. Being attractive is a double-edged sword – you can’t all be drop dead gorgeous like the three of us!

But underneath the chiseled cheekbones and sculptured torsos are two very impressive screen stars. Let’s take a look. Ladies first.

The Best of Angelina 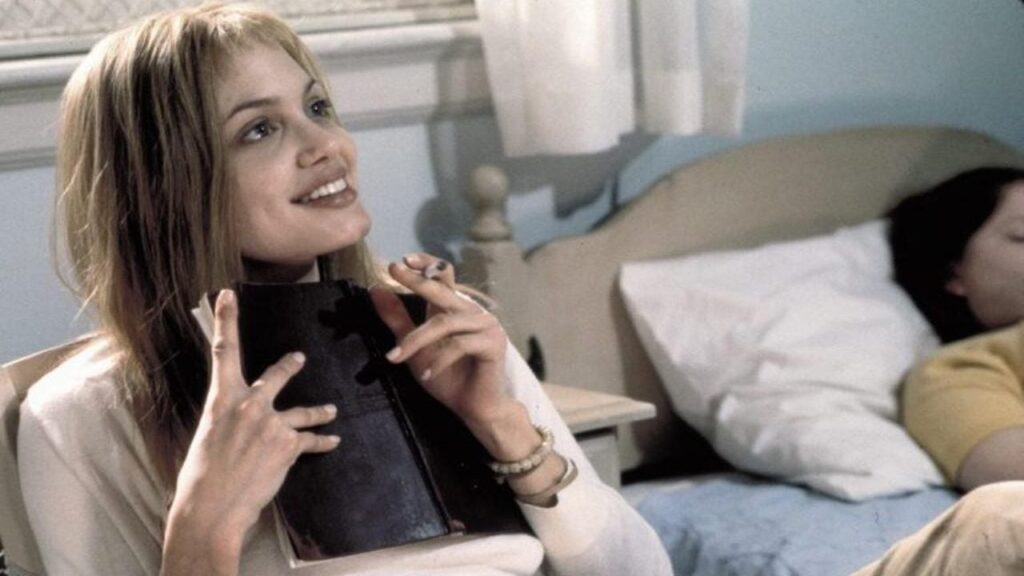 In reviewing Jolie’s filmography, I realize how few of her movies I’ve actually seen. I’ve admired her philanthropic work for a long time as well as her dedication to children and family, but I can’t say she’s among my top actresses.

Of the films I’ve seen, I would have to place her Oscar-winning performance in James Mangold’s GIRL, INTERRUPTED at the top of my list.

Based on author Susanna Kaysen’s account of her 18-month stay at a mental hospital in the 1960s, Jolie stole the show in her supporting performance as Lisa, one of Winona Ryder’s fellow patients in the psych ward. Lisa was an abrasive, confrontational character, but ultimately showed herself to be among the most vulnerable of the girls in the hospital.

While admittedly not the most original character ever conceived, Jolie has a fire and an obvious joy of performance that I miss in some of her later work. The film itself, while watchable and entertaining, is quite predictable and by-the-numbers, but whenever Angelina is on screen, it’s hard to notice anyone else.

The Worst of Angelina

Ironically, Jolie’s only other Oscar-nominated performance is my choice for her worst performance.

Clint Eastwood’s CHANGELING is a horribly disappointing,  unfocused and emotionally distant story of a mother whose son is abducted. Months later, a boy fitting the son’s description is found, and while the child claims to be Jolie’s son, she insists it’s not the same boy.

In fairness to those who haven’t seen the movie, I don’t want to give anything more away besides the basic plot, but it’s unfortunate that one of my most eagerly awaited films of 2008 turned out to be such a dud. I felt no connection to Jolie’s character Christine Collins, and the performance felt to me very repetitive and uninvolving. Oscar voters obviously disagreed, awarding her a nomination for Best Actress, but it remains to me a potential home run that barely hobbled to first base.

The Best of Brad 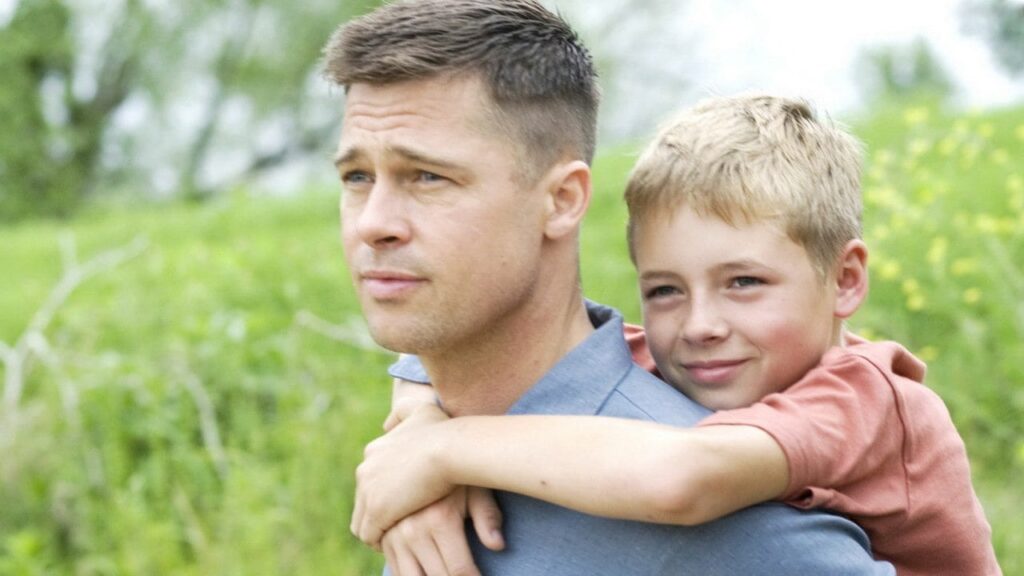 Brad Pitt’s searing performance in TREE OF LIFE is one of its many virtues. © 2011 Fox Searchlight − All right reserved.

We now move on to Mr. Pitt, with whom I have always thought I bore a striking resemblance – that is if Brad were standing in front of a funhouse mirror.

My favorite performance of his is found in a film that very few of you likely saw, even though it won a slew of awards and was nominated for several Oscars.

Terrence Malick’s TREE OF LIFE, released in 2011, is nearly impossible to describe. It’s bare bones plot revolves around a family in 1950s Texas, as the eldest son strives to reconcile his very complicated relationship with his father; however, that’s just the tip of the iceberg.

This extraordinarily visual and almost surreal film takes us into space, through hundreds of thousands of years, and not only makes us contemplate our own lives but the meaning of life itself. No words can do it justice – it must be seen to be believed.

Pitt’s performance as Mr. O’Brien is one of the film’s great achievements. He runs the gamut from loving father to monstrous tyrant with a skill he hasn’t really shown in other films. He makes the audience care for, if not necessarily sympathize with, a character that could easily have been a one-note bore. The film itself is definitely a love it or hate it experience, but I hope you’ll give it a try sometime.

The Worst of Brad

Rather than single out what I consider Pitt’s worst performance, I have decided instead to choose the biggest disappointment – David Fincher’s THE CURIOUS CASE OF BENJAMIN BUTTON.

I realize I’m not going to get a lot of support on this one as it was a big hit, won many awards, and remains to this day a favorite of many. I can’t remember a film in recent memory during which I tried as hard as I could to like it, but I just couldn’t make it happen. It crushes me, because I love the whole idea behind a man aging backwards. It’s a brilliant conceit that I thought would be virtually impossible to mess up considering the talent involved.

Unfortunately, while aspects of the film are great, I found the overall movie boring, cold, and bordering on tedious. I got a FORREST GUMP feeling from it, and I wasn’t that film’s biggest fan either. Pitt and co-star Cate Blanchett are not bad, and I wouldn’t necessarily call the film itself bad, but sometimes a big letdown is worse than a bad film about which your expectations weren’t as high.

The Chemistry of Brangelina

Lastly, I would be remiss not to briefly mention MR. AND MRS. SMITH, the film during which Brangelina originally fell in love. They play a married couple who don’t realize each other are assassins. After each being assigned to kill the same target, they discover they have been ordered to kill each other.

While it’s not a particularly good or memorable movie and the violence borders on obscene, it’s undeniably fun and the chemistry between Pitt and Jolie is obvious, not only in their love scenes, which are a bit on the rough side, but especially in their verbal repartee and sparring. I would have loved to see them challenged a bit more acting wise, but if I came across it flipping through the channels, I would most likely watch it again.

Do you have any favorite movies from one or both of these stars?

Please share your comments below. It’s always a pleasure to hear from you. 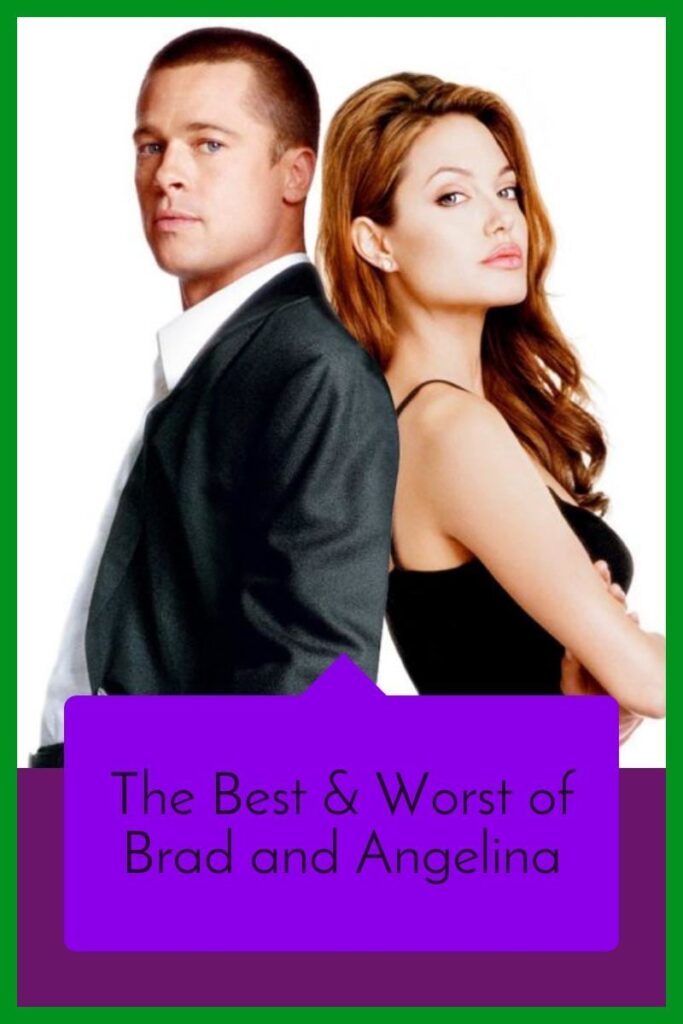