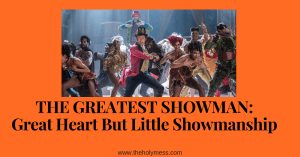 PLOT: Inspired by the imagination of P. T. Barnum, this original musical celebrates the birth of show business and tells of a visionary who rose from nothing to create a spectacle that became a worldwide sensation.

It’s not particularly fun for me to give a negative review to a family friendly film with a great message that artistically misses the mark. I’m afraid THE GREATEST SHOWMAN is one of those unfortunate occasions.

General America – and pretty much the whole world – absolutely LOVED this movie. It was the surprise hit of last winter, bringing in an impressive $174 million domestically and another $260 million in foreign sales.

Let me start out by saying that I am very thankful for the resurgence of film musicals that has taken place over the last 10-15 years, and I’m even more elated that many of them are originals, not just adaptations of Broadway hits.

So far my benchmark for recent original Hollywood musicals is 2001’s MOULIN ROUGE, and I admittedly thought about that movie a lot while watching THE GREATEST SHOWMAN. While not necessarily similar in terms of plot or story, they share a grandiose spirit and a scope leaning toward spectacle. But whereas MOULIN ROUGE came across as a whirlwind, I sadly left THE GREATEST SHOWMAN feeling only a slight breeze.

But let’s concentrate on the good first. I absolutely love the message of inclusion and acceptance that this film promotes. I feel that is especially important in light of what’s happening in our world lately.

While not an historically accurate presentation of the real-life PT Barnum, the film’s interpretation gives us a man who follows his dream, whose initial goal is to make his wife and children happy and prosperous, and who chooses to include in his endeavor those who are different and ridiculed and abandoned by society. One could cynically argue that he was exploiting them for their oddities, but I went along with the message the film was trying to convey. Actually, that could be an interesting discussion.

I was also quite entranced by actress Rebecca Ferguson who portrays Jenny Lind, the angelic singer who ends up temporarily derailing Barnum from his original mission. Her performance is the film’s highlight for me, and her character is given the best song in the movie, which admittedly gave me a goosebump or two.

But unfortunately I was mostly left underwhelmed, which is the last feeling you want to experience from a movie promoting pomp and spectacle.

I found Barnum as a character to be rather flat, and Jackman’s performance rather one-note. He’s an exceptional singer and usually very charismatic. But I think he is done in by the limitations of the role itself.

The surrounding characters are predictably stereotypical, which was very surprising to me. I mean, this is a film filled with unusual people with potentially fascinating stories to tell. But the filmmakers choose to concentrate their gaze on a totally generic love story between Zac Efron and Zendaya, incidentally the two most “physically attractive” cast members. I would have much rather learned about the backstories of some of these outcasts who were rescued by Barnum and given a whole new lease on life.

And can someone explain to me the appeal of Zac Efron, besides his obvious physical attributes? I have yet to see a performance of his that is anything but lackluster.

I know virtually everyone I hear talk about this movie loved the songs, but I found them monotonous, repetitive and similar to what you might hear at a bad theme park performance. Not one of them really stuck in my head, even the one I praised earlier, and that’s a bad sign for a musical. I wasn’t over the moon about LA LA LAND, which I liked a lot but didn’t love, but that song score was at least memorable and diverse. Not here.

I am obviously not giving this film a recommendation, but as a family film, you could do much worse. The film is watchable, and I would in no way refer to it as a bad movie, but I guess I see it more as a missed opportunity – something that could have been show-stopping rather than generically agreeable.

Have you seen THE GREATEST SHOWMAN? What’s your opinion? Share in the comments below.

More Movie Posts You Will Love

Pin This Movie Review for Later