Home » Family » Movies » The Shack Movie: Resources, Considerations, and What to Know Before You Go

THE SHACK tells the story of a man who enters a life-transforming spiritual journey. Based on the best-selling novel by William P. Young, the book has sold over 22 million copies world-wide. Yet the movie also stirs controversy, with leaders from mainline Christian churches raising concerns. If you plan to see THE SHACK movie or use it in your church ministry, here are resources, considerations, and what to know before you go. 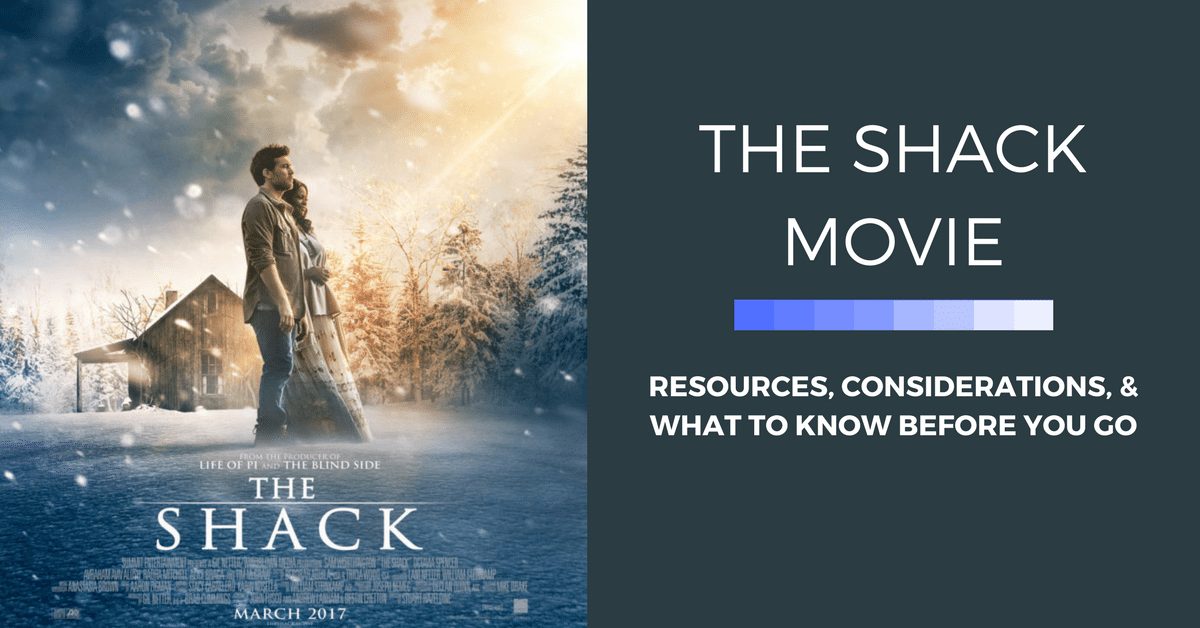 Be advised before reading any further. There will be spoilers below detailing specific information from the book and movie which has caused some controversy. If you are not familiar with the book and want to watch the movie without knowledge of specific plot details, you may want to bookmark this blog and read it another time. 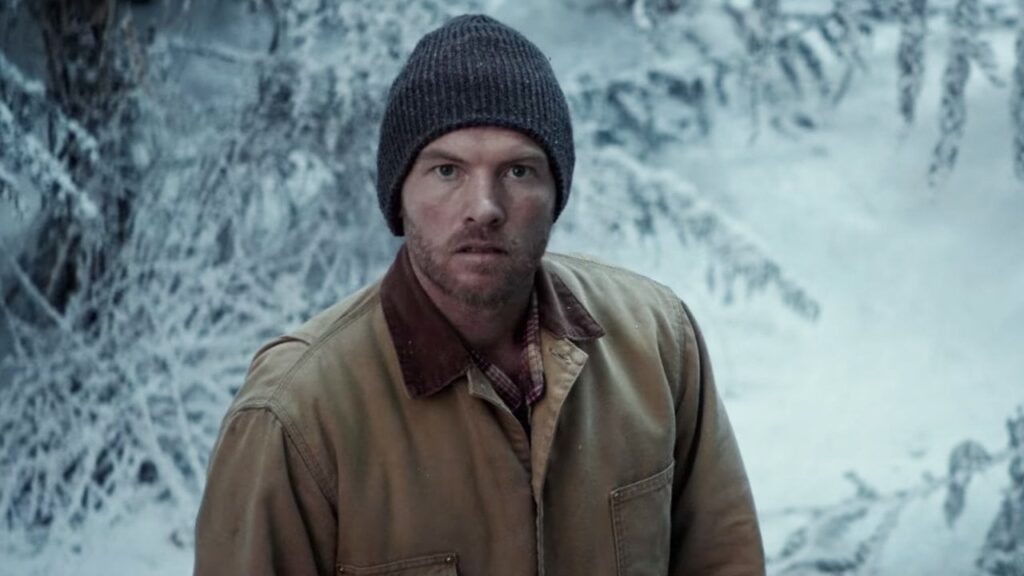 The film version of THE SHACK is directed by Stuart Hazeldine, whose only other feature length film was a 2009 thriller called THE EXAM. Producers Brad Cummings and Gil Netter have a history of uplifting and often spiritual films to their credit, including MARLEY & ME as well as the Oscar-winning films THE BLIND SIDE and LIFE OF PI.

THE SHACK cast features a number of familiar faces and award-winning actors and musicians. Headlining the film is Sam Worthington as grieving father Mack Phillips. I’m sure many of you may recognize him from AVATAR.

The crucial role of Papa/Elouisa is played by Octavia Spencer. One of the busiest actors of the last few years, Spencer won an Oscar for her role in THE HELP a few years back and is currently nominated again for her performance in the hit film HIDDEN FIGURES. Other members of the cast include Radha Mitchell, Graham Greene, and country singer Tim McGraw.

McGraw and wife Faith Hill have recorded a song called KEEP YOUR EYES ON ME featured in the film. Here’s a look at the music video.

THE SHACK takes us on a father’s uplifting spiritual journey. After suffering a family tragedy, Mack Phillips spirals into a deep depression causing him to question his innermost beliefs. Facing a crisis of faith, he receives a mysterious letter urging him to an abandoned shack deep in the Oregon wilderness. Despite his doubts, Mack journeys to the shack and encounters an enigmatic trio of strangers led by a woman named Papa. Through this meeting, Mack finds important truths that will transform his understanding of his tragedy and change his life forever. 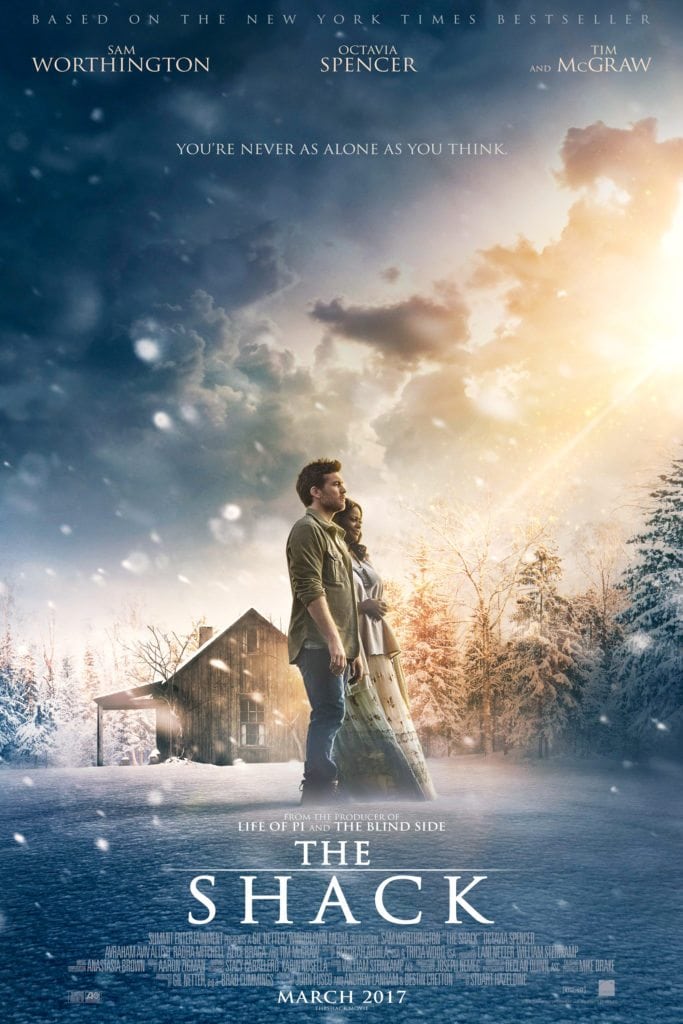 Again, let me stress that it is necessary to discuss specific plot details when commenting on the controversy surround THE SHACK. If you don’t want to know what happens, don’t read any further at this time.

William P. Young’s original novel caused quite a stir among Christians when it was first released in 2007 as the main protagonist meets God in the form of three people who seem to make up the Trinity – a Jewish carpenter, an Asian female, and an African-American female. In the book, when the main character Mack asks for God, all three of these individuals answer him. Some theologians feel the movie promotes the concept of modalism. For more information on modalism, click here.

As you can imagine, there was concern in some camps by making Papa, the character representing God, a female. I think it’s safe to say that when most of us try to visualize God, we tend to picture someone male. After all, the Bible uses masculine pronouns when discussing God, and God is referred to as the Father. In an interview with The Washington Post, the book’s publisher Wayne Jacobsen had this to say about the whole subject: “The paternalistic mind-set that a man can reveal God to the world better than a woman can is a mistake, and part of the book is meant to undermine that.”

Some of us are more sensitive than others when it comes to topics such as these. While they can be used as starting points for potentially deep and engrossing religious and philosophical discussion, many people are immediately taken aback by any notion that doesn’t gel with the visions and beliefs they’ve held since their early days of Sunday School. (See also: The 2 Most Controversial Easter Movies of All Time)

Do films like this challenge the norm or are they simply heretical? That’s probably for movie-goers to decide for themselves.

For those of you interested in reading more about the controversy, you might want to check out FINDING GOD IN THE SHACK

, in which theologian Randal Rouser responds to criticism of the novel.

Considerations & What to Know Before You Go

Here’s what you need to know before you head to theaters to see THE SHACK movie.

Although not expected to include violent scenes, the movie does have mature themes so may be suited for older children and teens. The main character is dealing with depression after the murder of his daughter, which leads to a mysterious invitation to have a spiritual experience at a shack in the woods.

Movie makers have stressed that the movie is different from the book, although at the time of writing this blog the movie hasn’t been released so details of differences are unclear.

I (Sara) read the novel The Shack when it first became popular. I enjoyed the book but didn’t fall in love with it the way some people did. Although I read it with an open mind because I understand that this is an allegory, I probably had trouble with various aspects that part ways from my Biblical understanding of who God is.

We are taking a group from our church to see the movie, and then we will host a discussion time after. To me, this is the best way to handle a movie like this one. With 22 million copies of the book sold, I think a book and movie like this are not to be ignored. People (both Christians and non-Christians) are reading this book and it shapes the way we as a society view and understand God.

The popularity of books and movies like HEAVEN IS FOR REAL

(which I also read) show me that people have a deep desire and longing for God. If you are a Christian who does not agree with these books, I promise you that some of your non-Christian or non-churched friends have read these books. If you ignore or dismiss it, you might be missing an opportunity to share your faith or invite them into your faith community.

Although the trinitarian concepts in the movie are most striking, perhaps even more concerning to me is the idea that we can base our faith on modern-day divine revelation, outside of study of the Bible and regular worship and partaking of the sacraments with other believers. This is the foundation for growing in faith and how the Holy Spirit works in the life of a believer in Christ.

I’ve read the concerns some pastors have that these works are a wolf in sheep’s clothing. We don’t go to see The AVENGERS and expect to learn much about God. The SHACK movie is considered a “Christian” movie. Yet is it Biblical? It is heresy? This is where it’s important to not just dismiss it or accept it, but to learn and understand.

This is the statement our church used on our promotional materials for a group event.

We recognize the controversial nature of this movie and by hosting this event we are not endorsing the views expressed in this work of fiction but see it as an opportunity to open discussion into spiritual matters.

Hack The Shack — Great article in the Lutheran Witness about the pros and cons of the novel.

A Reader’s View of The Shack — Explains theological concerns.

What’s So Bad About The Shack? — Addresses the question, is it heresy?

The Shack – The Missing Art of Evangelical Discernment — by Dr. Albert Mohler 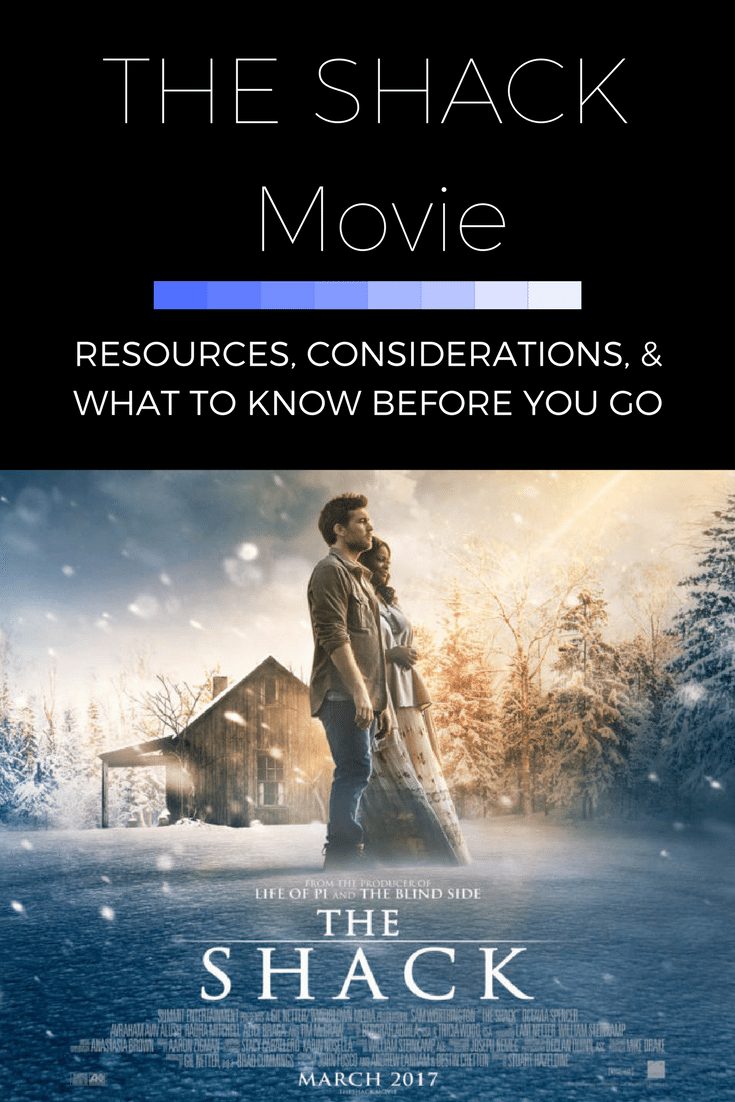