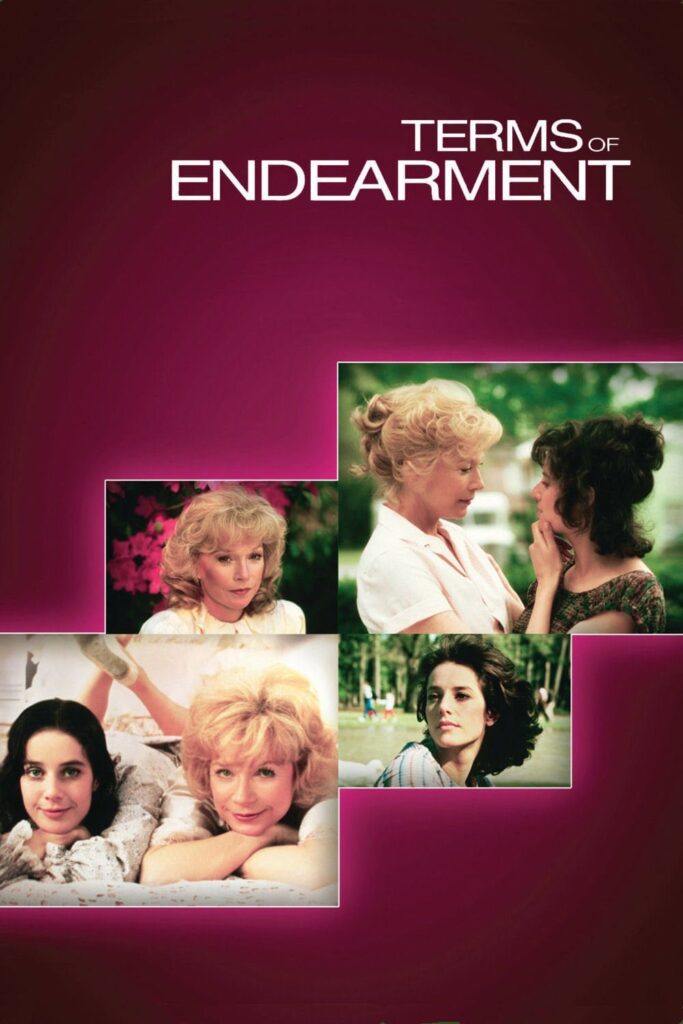 In a nuthsell: The often tumultuous relationship between a mother and daughter over 30 years is chronicled in this comedy/drama that was the big winner of the 1983 Academy Awards.

One of the best quotes I ever read about a movie character was describing Aurora Greenway, the stubborn, obstinate, overly needy mother played so well by Shirley MacLaine in 1983’s TERMS OF ENDEARMENT. I don’t recall the exact words, but it was something to the extent that Aurora didn’t realize that a mother isn’t supposed to eat her young. And that is totally Aurora in a nutshell – her love for her daughter is evident and unquestionable, but it always seems to be tempered with a bit of selfishness! Unconditional love is ultimately wanting what is best for the lovee, not the lover. Aurora unfortunately never quite learned that rule.

The very first scene of this film, the Best Picture winner of 1983, serves as a wonderful prologue to the relationship we’re going to witness for the next two hours. Aurora stands at her baby daughter’s crib, watching her peacefully sleep. A panic begins to ensue – is she sleeping or has she succumbed to crib death? Aurora practically crawls into the crib, rustles young Emma just enough to hear a cry, and heads back to her own bed in relief.

We soon jump ahead probably a little over 15 years – Aurora is now widowed and baby Emma has blossomed into Debra Winger. Probably the greatest joy of this picture is watching the wonderful rapport between MacLaine and Winger, particularly considering the fact that they famously did not get along while making the movie and were very vocal about that fact. Winger, in particular, gives such a wonderful, natural performance throughout this movie. While the dialogue is filled with one-liners and ridiculously smart exchanges, it usually succeeds in not feeling over-written. You are touched or amused or surprised by what the characters say but it feels organic to the characters themselves and not like a screenwriter’s conceit.

Emma ends up marrying a young college professor named Flap (Jeff Daniels) of whom Aurora naturally doesn’t approve. How could she? Emma could have married the King of England and Aurora would have still found a way to interfere. Thankfully for Emma, Aurora’s meddling time is eventually disrupted as her attentions turn toward neighbor Garrett Breedlove, a former astronaut and current ladies man played in an Oscar-winning performance by Jack Nicholson. Aurora is alternately disgusted by the type of person Garrett is – or she perceives him to be – and attracted to him, largely for the same reasons.

Throughout the rest of the film, we witness sickness, affairs, fights, death, and not having enough money at the checkout line of the grocery store – in other words life. I don’t like to give too many specifics in my reviews in case the reader hasn’t seen the movie, so I will probably end my plot description there and let you enjoy the ride.

James L. Brooks is the director and screenwriter for TERMS OF ENDEARMENT, which he based on Larry McMurtry’s 1975 novel. Brooks had a background in sitcoms before making his first film, having contributed to “The Mary Tyler Moore Show“ and “Taxi“, among others. One of the overall faults I do find with this movie is that it does often have a bit of a sitcom feel to it. Aurora has a series of suitors, including Danny DeVito, that aren’t fleshed out in the slightest and feel overly one-dimensional in their limited screen time. MacLaine and Nicholson’s first date, while a pleasure to watch, seems a bit cartoonish as well.

Of the supporting men in the movie, while Nicholson received the unanimous critical and awards attention, I was frankly more impressed by a young Jeff Daniels as Winger’s husband Flap. Nicholson is just fine in the movie, as charismatic as always in a role originally meant for Burt Reynolds, and he has a couple killer scenes, but I felt him to be a distraction from the center of the movie and could easily have imagined his performance edited out or slightly diminished. Daniels, on the other hand, does the near impossible – allowing us to feel sympathy for a character who spends a good chunk of the film cheating on his wife. It’s a great, unheralded performance! Watch the scene toward the end of the film between him and MacLaine. It’s a brilliant piece of acting!

The virtual disappearance of Debra Winger as a major film actress after a stream of stellar performances in the late 80s and early 90s is still heartbreaking to me. She has recently made some occasional appearances, most notably in RACHEL GETTING MARRIED in which she shares a scene with Anne Hathaway that gives me chills every time I see it and makes me sad that she hasn’t been more of a force in the movies. Shirley MacLaine is absolutely marvelous, and I would never want anyone to under appreciate what she does with Aurora, making her one of the most fascinating movie moms ever, but the heart and soul of this movie is Winger.

Debra Winger reminds me a lot of one of my other favorite actresses, Holly Hunter, in that they both have an uncanny ability to take what seems to be a stock or ordinary character and do something magical. Ironically, Hunter replaced Winger in James L. Brooks’ follow-up BROADCAST NEWS. Winger has scenes with her kids in this movie that feel so excruciatingly real, including an exchange toward the end of the film with her two sons that is nothing short of devastating and one of the great scenes of any movie from the 80s.

Ultimately, I think TERMS OF ENDEARMENT has so many dazzling scenes and really great parts to it, one is inclined to believe it is a better movie than it actually is. It was made over 30 years ago, and while it holds up quite well for the most part, there is a feeling of artificiality to it in some parts. That being said, when you’re enjoying the ride as much as you do here, you’re a bit more forgiving of its failures and acknowledge it for what it is. If only Aurora Greenway could learn that same lesson!