Home » Faith » A Conversation About Forgiveness

The conversation came up at 7:30am over bowls of Cinnamon Toast Crunch cereal. (I know, it’s expensive junk food. Judge me if you will.)

My elementary school son has been getting into continued skirmishes with another boy in his grade, and this has continued for a couple years now. Their behavior has been mostly verbal but sometimes escalates into the physical. The other boy’s mom stopped me before school yesterday to talk to me about the situation. I give her kudos for being a wise mom to be proactive and talk to me about the situation.

A Conversation About Forgiveness

This morning I asked my son about a situation that happened on the playground a few days ago.

I asked, “So when he said that, what were you thinking?”

My son replied, “I was thinking of everything that happened last year, when he pushed me in our classroom. Besides, I do have a life, Mom.”

I said, “Of course you have a life. Have you forgiven him for what happened last year?”

My son responded immediately, “No, I haven’t forgiven him.”

I pondered this a moment. I have to admit I admired his honesty. I think most adults would say we have forgiven whether we have or not.

I asked, “How did you respond on the playground?”

My son replied, “I told him he had a big bald head!”

These are the parenting moments when I pray a quick prayer for wisdom, discernment, and please, God, help me not to bust out laughing right now.

To be honest I was thankful the situation hadn’t escalated into anything more serious. These boys are almost to middle school and kids are growing up fast these days. Many kids in elementary school have seen movies I haven’t even seen.

Granted, I’m not happy with their insults, but I knew it could be far worse.

By this time my husband Mike sat down and joined the conversation. He asked, “What do you think God would say about this situation?”

Our son replied, “God would say, ‘Love your enemies.'”

Tricky parenting moment, this one. Good to know these Biblical truths are sinking in, but “enemy” is a powerful word.

“That is true,” my husband told him, “and also consider what might happen if you think of this young man, instead of an enemy, as a friend, or at least someone you can get along with.”

I followed up with this question. “When these hurtful words were said to you, how did you feel?”

Right away my son said he felt angry, sad, and hurt.

Next I said, “Think of forgiveness this way. When you make the choice to forgive — and forgiveness is a choice — you are able to rule with your head instead of your emotions. When you do not forgive, you hold all of those emotions inside of you, and when one little thing happens, BAM, all those emotions come flying out, just like they did the other day on the playground. You can choose to forgive, even if the other person doesn’t ask for it or doesn’t deserve it. When Jesus died on the cross for us, it wasn’t because we deserved it. It was because He loved us.”

My son looked at me for a long moment. I could tell he was processing deeply.

“Can I have a second bowl of cereal?” he asked.

I turned to Mike. “There is only so much the young brain can absorb at once. I think we did well for one breakfast.” 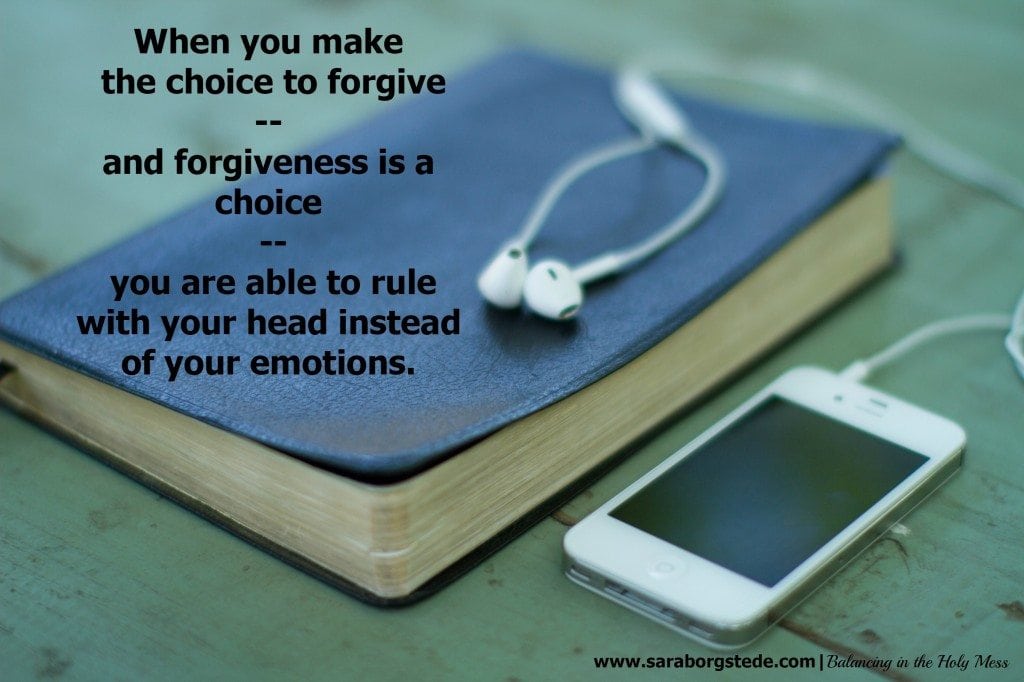 Linking today with So Much at Home.