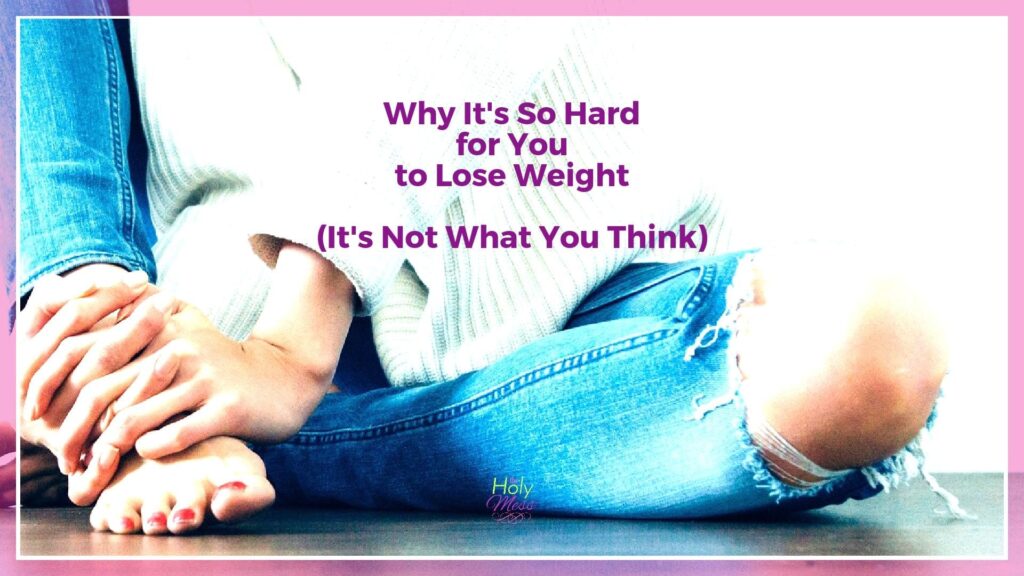 There’s one big reason why it’s so hard for you to lose weight.

And it’s not what you think.

I was overweight for the first 30 years of my life, and well over 100 pounds overweight for a good part of my adult life, so I have a lots of experience with this subject.

The first and most obvious reason that comes to mind about why it’s so hard for you to lose weight is — you love food! Cheeseburgers and french fries are delicious! Doughuts are fried balls of heaven.

So you love food. Who doesn’t? But some people seem to be programmed to really go after it. Maybe you think about it more than most people. I get that, since I’m in that camp, too.

And maybe you hate exercise, which makes losing weight all the more difficult.

But there is actually an even bigger reason why it’s so hard for you to lose weight.

Your ONE BIG THING

I occasionally read the blog of Elizabeth Esther, a woman who was raised in a Christian fundamentalist church, which was basically one step away from a cult. She has since left that church and writes about adjusting to her typical life today.

In this post, she talks about how her teen daughter is attended prom this week. Elizabeth never attended prom, because fundamentalists don’t do proms. Here is a quote from her insightful blog:

I can’t believe it still matters. But it does.

It’s so stupid. But it’s true.

Just when I’m beginning to think that I’ve finally shed the last dead layer of fundamentalism, something happens to remind me that nope, nope. I’m still that weird girl from the cult. I still inhabit this skin.

Her story is extreme and her painful life experience is one from which we can all learn, so I don’t mean to say my situation is anywhere close to equal to hers.

But I will say this. When I read that, while I was sympathetic, I also thought, “Yes, but even if you weren’t raised fundamentalist, maybe you still wouldn’t have gone to prom.”

When you’ve got your ONE BIG THING that’s your problem, it becomes really easy to blame everything in your life on that problem.

That’s my connection point to her blog post and my food and weight issues — and perhaps yours, too.

Being overweight is really painful, and I know it’s totally awful. It practically ruined me until I got the help I needed. I thought it would crush me.

Yet being overweight also proved useful it its own way, and your food issues, as painful as they are, are useful for you, too.

When You Blame Your Weight

When you are overweight, you get to blame things on your weight.

Don’t even tell me that you don’t. I know, because I did it for so many years.

If I didn’t hang with the popular kids in high school, or get invited out on dates, it was because I was fat. And that really hurt, but I could also blame my fat. I could rant and rage inside at those rude, cruel kids who judged me based on my weight. Shame on them.

When I was a young adult, married and with a new baby, there was an event that I didn’t get picked to attend, when I was sure I would receive an invitation. I convinced myself it was because I was overweight and the presenters of the event only wanted thin, beautiful people in attendance. I was still devastated, but less so than thinking they just didn’t want me there.

Too tired? It’s because I’m fat and out of shape.

People don’t want to be my friend? Fat intolerance.

Didn’t get the job? Fat.

When Your One Big Thing is Changeable

Many people have a One Big Thing they blame for a lot of their life problems, whether they realize it or not.

The color of their skin.

Who their parents are.

How much money they have or don’t have.

Being overweight is changeable, and this is both positive and negative.

Let that sink in for a moment. A changeable One Big Thing is motivating. This also creates pressure.

What Thin Will Mean

The other thing that happens when you are overweight for a long time is that you begin to create a fantasy world in your mind about what life will be like when you are thin. I don’t mean you think you will live in a castle with Prince Charming. (Although there is some of that. In high school I was sure I would get a boyfriend once I lost 50 pounds.)

When I’m thinner, I’ll get that job promotion.

After I’ve lost the first 30 pounds, then I’ll start going to the gym regularly.

It’s only natural to idealize a goal. The problem is that if you put so much pressure on yourself to be this certain perfect someone once you become thin, you will not want to go there.

So here’s my challenge for you. (I know, you probably thought this blog post was going to be about fat grams and the curse of your grandmother’s slow metabolism. But the reality is that lasting weight loss is really not about those things. It’s about getting your head in the game.)

Over the next few days, notice your thoughts when it comes to your body, your weight, and your eating habits. If you journal, jot down some notes. Notice:

Get a 20 page printable kit.