Home » Faith » If Today is Boring, Read This

Life has plenty of excitement for any parent, both positive and negative, but in between are row upon row of those routine, remind-me-why-I’m-doing-this-again days.

This morning during my devotion time I read from Exodus 13, which is copied below. The backstory here is that God’s people, under the leadership of Moses, had just watched as God poured out the miracles of the ten plagues on Egypt. The 10th and worst plague was part of the first Passover, where the firstborn of every creature and family was killed, including Pharaoh’s own son. Finally, Pharaoh’s allowed the Israelites to be freed from their slavery.

This is what happens next:

When Pharaoh let the people go, God did not lead them by way of the land of the Philistines, although that was near. For God said, ‘Lest the people change their minds when they see war and return to Egypt.’ But God led the people around by the way of the wilderness toward the Red Sea. And the people of Israel went up out of the land of Egypt equipped for battle. Moses took the bones of Joseph with him, for Joseph had made the sons of Israel solemnly swear, saying, ‘God will surely visit you, and you shall carry up my bones with you from here.’ And they moved on from Succoth and encamped at Etham, on the edge of the wilderness. And the Lord went before them by day in a pillar of cloud to lead them along the way, and by night in a pillar of fire to give them light, that they might travel by day and by night. The pillar of cloud by day and the pillar of fire by night did not depart from before the people. Exodus 13:17-22

Does the land of “Philistines” sound familiar? Goliath was a Philistine, whom David would fight years later. These were ferocious people.

The Israelites were ready to go, man! They had on their battle gear. They had just plundered the Egyptians. They saw victory and were ready to fight and destroy. Yes!

Yet God knew them so well. God knew that at the first battle cry, they would high tail it and run, right back into slavery. The Israelites were brick makers, not soldiers.

So He led them, by cloud and fire, around the long way.

Are you listening to this, my friends? God led them around. THE. LONG. WAY. The long, boring way. ON PURPOSE.

Please click here to read the remainder of this post, which is featured today on Busy Being Blessed blog.

This is part of Jenn’s #imperfectmom confessional series, and I hope you will check it out. The whole series is based on the idea that we are far from perfect, but forgiven by God’s grace. I’ve been blessed tremendously by reading the posts by these incredible writers. 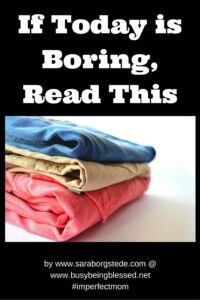