I haven’t seen very many 2015 films yet, but 45 YEARS is the best film of the year I’ve seen so far. It is exactly what I look for in a film – it is challenging, it is unpredictable, it makes you re-examine the parallels in your own life. 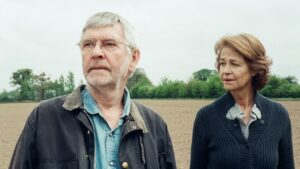 If JURASSIC WORLD was a deep movie-going experience for you, than this film probably isn’t your cup of tea. (No offense, just saying.)

I’m not going to discuss the plot in much detail other than explain that it’s about the days leading up to a couple’s 45th anniversary and how a letter in the mail could keep them from reaching number 46. Part of the fascination of the movie is watching it unfold, and even though it’s the farthest thing you’ll find from a thriller or mystery, it’s almost like a good Agatha Christie nail biter. You have no idea how this story is going to resolve itself.

I will share with you that there is one moment in the film when I audibly gasped. I haven’t done that at a movie since BLACK SWAN. 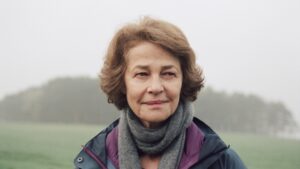 I must also briefly discuss Charlotte Rampling, the luminous star of this film. Ms. Rampling will be turning 70 in February, but her beauty has never been more ravishing, her intelligence more undeniable. It’s a controlled performance. She has a couple opportunities to release her anger and resentment, but most of the time it’s all in the eyes. You can see the wheels turning, you can feel the frustration, she’s like a volcano verging on eruption.

Many people may have trouble with the ending because of its ambiguity. I thought it was phenomenal. Rampling says hardly anything the last 15 or 20 minutes of the film, yet there isn’t an emotion she doesn’t reach, and the very last scene, with a simple hand gesture, she tells us everything. This is acting at its finest and a film worthy of your investment!

SUGGESTED VIEWING AGE:  18 and up