IN A NUTSHELL:  After a near fatal car accident, an author of romantic fiction finds himself being cared for by his self-proclaimed number one fan. He quickly learns that there is a fine and deadly line between fan and fanatic. 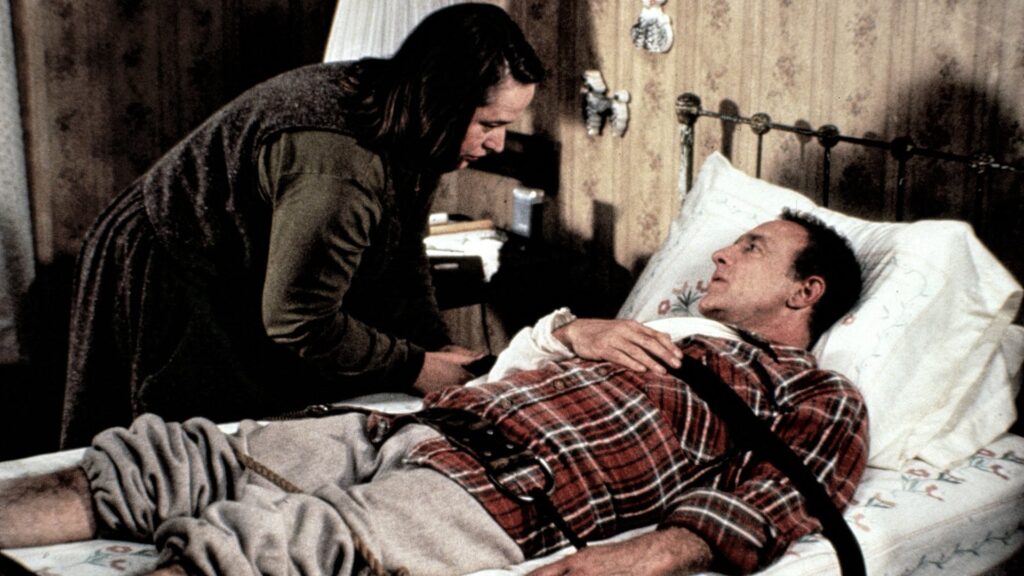 I’ve always thought that the scariest, most terrifying and certainly most disturbing movies are the ones that portray events that could feasibly happen in real life. All the ghosts and goblins and creepy clowns normally don’t get under my skin as much as a simple battle of wills between a protagonist and a victim. Rob Reiner’s MISERY, based on Stephen King’s best seller, has everything going for it in this department.

As the film opens, famed author Paul Shelton (James Caan) has just finished his latest novel. A horrible snow storm transpires while Shelton is driving down a mountain road, which inevitably leads to a terrible accident in which he is almost killed. When he eventually regains consciousness, he finds himself in the home of Annie Wilkes (Oscar-winner Kathy Bates), who introduces herself as not only a skilled nurse but also his number one fan.

As time goes by and Paul slowly improves, he becomes increasingly concerned over his caretaker’s behavior. When he asks to call his daughter or his literary agent (Lauren Bacall), he is repeatedly told that the phone lines are down. When he begins to question if a hospital would be a better place for his recovery, Annie claims that roads are too hazardous for the journey. Annie shows signs of bipolar personality, going from cloyingly sweet to erratically antagonistic in the blink of an eye.

The only other characters of note are a local sheriff (Richard Farnsworth) who is contacted by Paul’s agent after his prolonged absence causes concern, and the sheriff’s wife (Frances Sternhagen) who provided the film with a bit of comic relief from time to time. 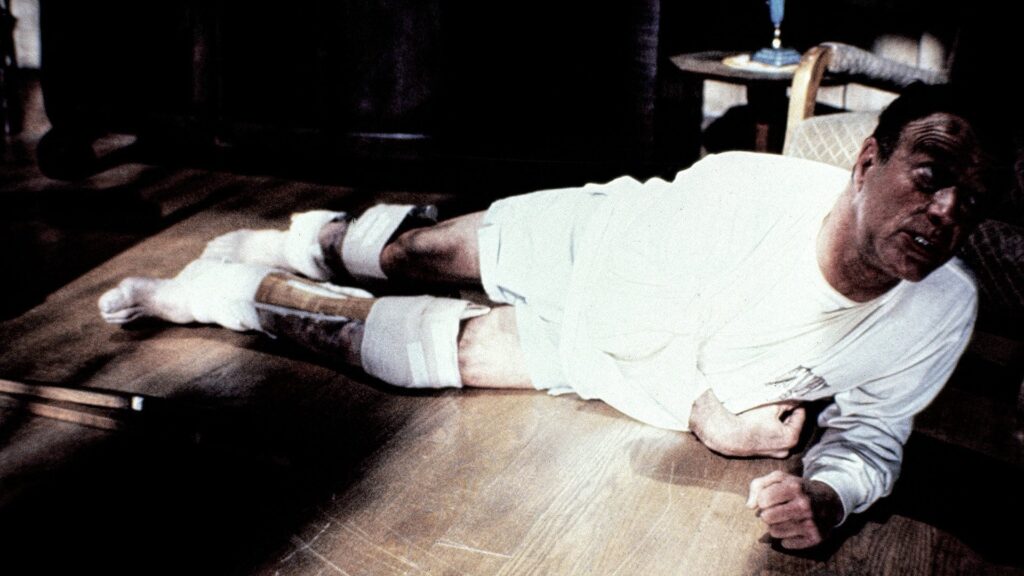 James Caan has just a bit of trouble with one of his fans in MISERY. © 1990 Columbia Pictures − All right reserved.

Oddly enough, one of the strengths of Reiner’s film is that it doesn’t feel overly claustrophobic, especially considering we spend a vast majority of the time with two characters in a single room. At times it has the feeling of a play the has been opened up for the silver screen; however, in the case of MISERY, the play came after the film, opening on Broadway with Bruce Willis in the Paul Shelton role and Laurie Metcalf, who received a Tony nomination for her role as deranged Annie Wilkes.

Reiner does a fantastic job of building suspense in this film, often economically so. A simple close-up radiated by a bolt of lightning is among the scariest images I’ve seen in a recent film. I saw this movie in a theater when I was 17, one of the first R-rated films I saw without a parent or guardian, and when this scene happened, I literally jumped out of my seat and practically landed in my neighbor’s lap.

There is a sense of urgency and frustration that is highly palpable, and James Caan does as best as anyone could in his portrayal of the pigeon-holed author whose desire to spread his wings is met with life-altering results. It’s a thankless role, to be honest, as he is basically playing the straight man, and with a couple notable exceptions toward the end of the film, he isn’t given any opportunity for histrionics or playing to the back row. That same can’t be said for Kathy Bates.

In the decades since MISERY was first released, Bates has obviously become a recognizable staple of film and television, but one has to recall that she was barely recognizable to the general audience at this time. Mainly known as a well-regarded stage actress, she had been featured in supporting roles over the years, but this was obviously her introduction to a new level of fame. I definitely think that sense of anonymity works in her favor. Word at the time was that Bette Midler was the original choice for Annie Wilkes, and as wonderful an actress and performer as she is, I don’t think the effect would have been nearly the same. 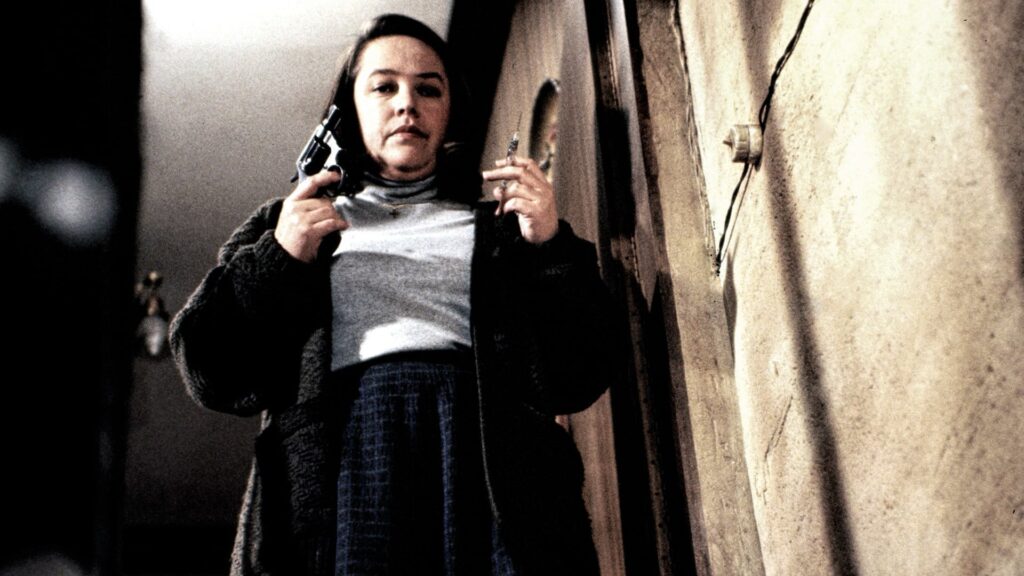 Kathy Bates won an Oscar and a whole legion of fans for her role in MISERY. © 1990 Columbia Pictures − All right reserved.

Bates is obviously a revelation in this movie, but I tend to think she might have been a wee bit over-praised, not necessarily for any fault in her performance but for the given limitations of the role. If you really stop and think about it, she basically has two speeds, and it’s a performance that is either black or white, not much nuance or subtlety. Again, I need to stress that she plays both to the hilt, but I don’t think it was particularly Oscar worthy, especially considering she beat Anjelica Huston in THE GRIFTERS, which is one of the great performances – male or female – of the last 30 years.

I really like MISERY a lot, but I can’t help but wish it had been a little grittier, for lack of a better word. As disturbing and nightmare inducing as it is (the hobbling scene alone is one for the record books) there remains a gleen of Hollywood artificiality over it. Maybe my feelings are impacted by the horror films of recent years that are made with a precise, documentary-like feel to them. This film doesn’t have a lot of dirt under its fingernails – it’s a little too polished to be considered truly great.

I also must profess that I was not a fan of the ending of this film, which unfortunately becomes one of those stock climaxes in which one character seems to be dead but at the last milli-second jumps back to life just in the nick of time. It’s becoming as much a cliche as the cat jumping from the bookshelf causing the potential victim to scream in utter hysteria.

But in spite of a few limitations and missteps, MISERY is a success. Caan and Bates play a wonderful duet, and while none of the supporting characters are fleshed out in the slightest, Farnsworth and Sternhagen are a nice breath of fresh air in their few scenes and have a nice laid-back chemistry with one another.

This is a creepy, crowd pleasing, often pulse pounding roller coaster of a movie! And it’s the perfect film for a dark, stormy night with a bucket of popcorn, especially if you live next door to a crazy lady about whom you’ve always been a bit leery. Lock your door! 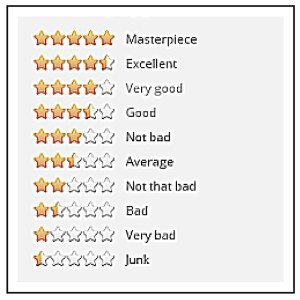