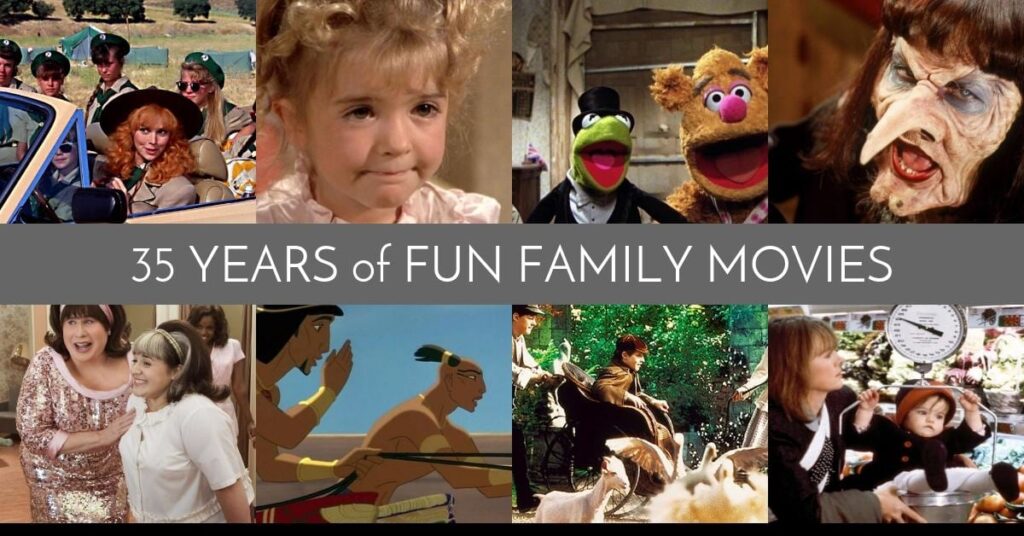 As a courtesy to you wonderful readers with children on summer vacation, we’ll be taking a stroll down memory lane as we look at the last 35 years of family movies. This is a wonderful time of the year to watch movies together as a family on a rainy afternoon or a sultry day when the summer sun is just too hot to bear.

All the movies I’m sharing with you are rated PG or lower and contain elements that I believe will entertain most if not all age groups. I have seen the vast majority of these films, and the ones I haven’t have either been recommended to me or received positive reception at their time of release. That being said, I realize all parents have different guidelines for acceptable movies, so I always recommend that you watch the movies before your children first in case there may be any objectionable material.

2010 – WAITING FOR SUPERMAN (Rated PG) – Yep, another documentary. Your kids are going to hate me by the time this is over. I am willing to take the risk, though, because this more than any other title on my list, should be required viewing for families. Davis Guggenheim is the director and co-writer of this indictment on the current state of the American public school system. Guggenheim is also the talented fellow who made AN INCONVENIENT TRUTH back in 2006, which took a scathing look at global warming and its effects on the environment. I love artists who use film not only to entertain but also to enlighten, to probe, and to challenge. Over the decades there have been countless reforms and attempts to strengthen our education programs in an attempt to produce more graduates than drop-outs. Why have the improvements been so limited and, in some cases non-existent? What can we do that hasn’t already been done. You’ll have some great discussions after this movie! (Currently available for rent on Google Play, Amazon Video, and Vudu. Free to TubiTV subscribers. Available for purchase on CinemaNow.)

2011 – THE MUPPETS (Rated PG) – In my mind, Kermit and Miss Piggy and all their pals are living breathing creatures, not puppets, and I will continue to believe this until my dying day. I consider them one of the great creations of family entertainment which earns them a second mention in this blog series. Walter is the biggest Muppets fan ever, and when he discovers that a greedy tycoon is planning to destroy Muppet Studios, he embarks on a mission, along with his human brother and his brother’s fiancee, to reunite all of the original Muppets who have gone their separate ways in order to raise the money needed to save the studio. This ridiculously touching and nostalgic film will bring back wonderful memories for those of you who grew up with Jim Henson’s gang and make new converts of youngsters not familiar with this wonderful group of characters. The ending song and dance number is a real highlight, and you will get a kick out of all the celebrity cameos. This is one of the ten best films of 2011! (Available for rent on Google Play, Fandango Now, Vudu, Amazon Video, and Sling Television. Available for purchase on VidAngel.)

2012 – FRANKENWEENIE (Rated PG) – This may prove to be one of the more divisive films I’ve mentioned throughout this whole series. This animated film from the creative juggernaut that is Tim Burton is decidedly not another normal Pixar or Disney production. The animation itself is actually stop-motion and filmed in black and white. The plot revolves around a little boy’s attempt to bring his deceased dog back to life and the havoc that ensues. More adventurous viewers a little tired of the basic tried and true will likely relish the imagination and creativity of this movie, which is actually based on a short film Burton made decades ago. If your family enjoyed THE CORPSE BRIDE and THE NIGHTMARE BEFORE CHRISTMAS, this film will be a perfect addition to your movie library. (Available for rent on Fandango Now, Google Play, Vudu, Amazon Video, and Sling Television.)

2013 – THE SOUND OF MUSIC LIVE! (Unrated) – Movie purists out there are going to tar and feather me for even considering this recommendation, but hear me out. I realize it’s not the 1965 original, and nothing can ever come close to Julie Andrews twirling on a mountaintop singing her brains out. I realize Carrie Underwood may be my favorite contemporary country singer but acting is probably not the best use of her talents. And I realize the songs and story will make make overly cynical viewers want to burn the DVD halfway through. That being said, I was genuinely moved on more than one occasion, including the sublime Audra McDonald singing a goosebump-inducing version of Climb Ev’ry Mountain. And this was the very beginning of a wonderful trend I fully support and hope continues for years to come – the return of live television. It’s the next best thing for those of us who aren’t able to attend Broadway shows and want to experience a little bit of the thrill of sitting in the third row on 42nd Street. (Also available for purchase on Vudu, Amazon Video and CinemaNow.)

2014 – PADDINGTON (Rated PG) – What a wonderful surprise this movie turned out to be and purely by accident! My 19 year old niece and 7 year old nephew were visiting for the day, and we were desperate to find a film on which everyone could agree. I finally ended the suspense by choosing the movie about a Peruvian bear who takes residence with a couple in England only to be threatened with taxidermy by an evil Nicole Kidman. And you know what? We all loved it! There were plenty of funny slapstick moments and cute cuddly bear scenes for the little one and enough clever dialogue and cute cuddly bear scenes for the older one – for a moment we were all happy! Obviously based on the series of books by Michael Bond and the multiple television series that followed, this is a delightful family movie which takes the viewer on an adventure from the jungles of South America to the rainy streets of London. This is one of the rare occasions when I actually wouldn’t mind seeing a sequel. (Free to Showtime subscribers. Also available for purchase on Google Play, Amazon Video, Fandango Now and Vudu.)

2015 – BATKID BEGINS (Rated PG) – This film is my favorite new discovery of this entire blog series – a documentary about a young boy with leukemia whose Make-A-Wish fantasy of becoming a super hero for a day is realized with the assistance of hundreds if not thousands of people across the world who are moved enough by his story to drop everything and become part of making his wish come true. I literally cried for over half of this movie’s running time and for 90 minutes I lost every cynical thought I ever had about the world. In fact, the story is so strong in and of itself that I didn’t consider it a movie so much as a visual journal of the events leading up to and including the day young Miles and his family will remember forever. This is a wonderful film to remind everyone in your family how fulfilling it can be to work together as a community and find joy in the happiness of those around you. (Free to Netflix subscribers. Also available for purchase on Vudu, Amazon Video, Fandango Now, Google Play and CinemaNow.)

2016 – ZOOTOPIA (Rated PG) – I have done my best to try highlighting more overlooked and lesser known films during this series, but I haven’t had a chance to watch many 2016 family movies, so I have to sing the praises one more time for ZOOTOPIA. Rather than waste your time repeating what I’ve already said, have a look at my original review. Now that it’s out on DVD, I am anxious to relive the wonderment all over again. So far, this remains my favorite film of the year! (Available for rent on Vudu, Amazon Video, Google Play, Fandango Now, and Sling Television. Also available for purchase on VidAngel.)

Other Posts in This Series: 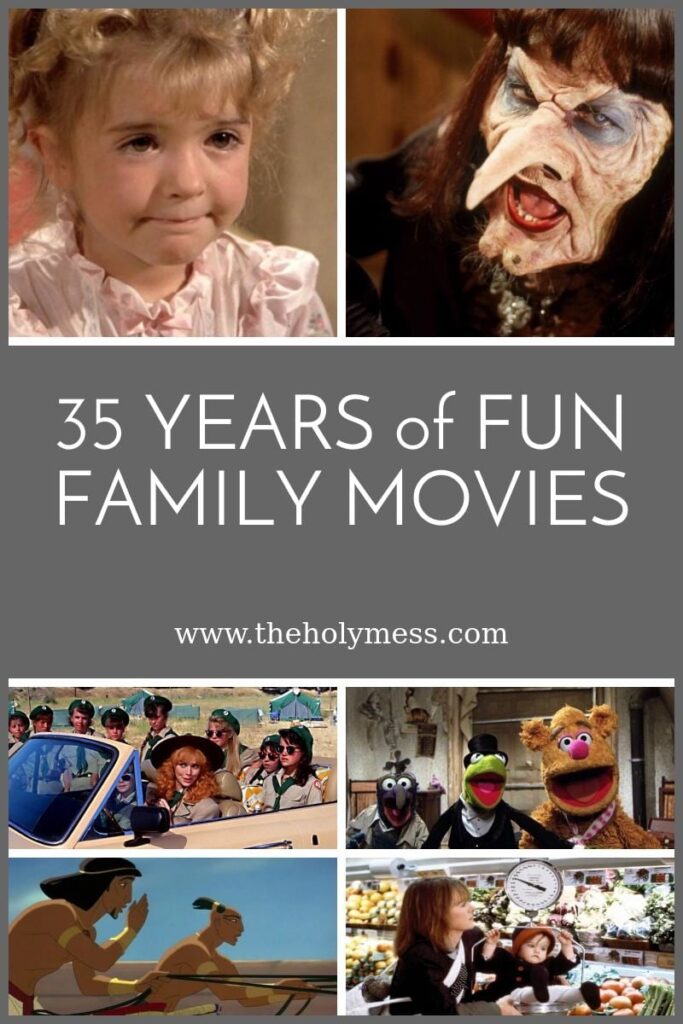