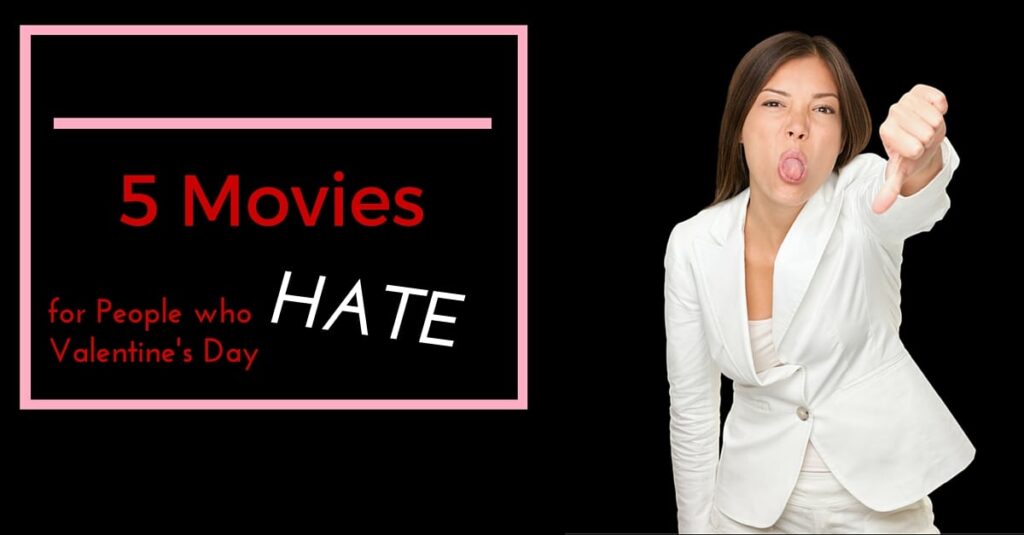 As everyone keeps harping about over and over again, Valentine’s Day is fast approaching. Unfortunately, Cupid’s arrow is taking a detour. Instead of running in slow motion through fields of meadow grasses with the strains of violin music playing in the background, you’re running really quickly through a dark alley with the strains of rap music playing in the background. Ladies, do you hear the doorbell ringing? Its the plumber coming to fix the toilet. Gentlemen, did you see the envelope on the kitchen table? It’s a shut-off notice from the power company.

(If you are a hopeless romantic, leave this post and go check out 5 Movies for People Who Love Valentine’s Day.)

To celebrate the occasion, here are five suggestions of movies  – OK, technically 6 – to stream, rent or slip in the old DVD player while you cuddle up with your dog or cat and wallow in the strength and passion of your commitment to one another.

(1986) – You gotta love a movie that starts with a marriage and ends with the wife throwing a key lime pie into the husband’s face and demanding the car keys. And yes, ladies and gentlemen, this is a comedy, albeit a comedy of sophistication and manners! Legendary director Mike Nichols teamed heavyweights Meryl Streep

‘s novel, which itself was a fictionalized account of her marriage and break-up with reporter Carl Bernstein. Streep is food writer Rachel who meets and falls in love with Washington columnist and notorious playboy Mark. At their wedding, his best friends warn her, “You’re the only person he’s ever treated decently.” Eventually, Rachel learns of Mark’s affair with a politician’s wife – while she’s pregnant with their second child. The film is peppered with witty and insightful dialogue about modern love and marriage. Those unfamiliar with Ephron’s writings are missing out on one of the most acerbic, funny writers of recent times. This title is available for rental on Amazon Video, Google Play, or Vudu and available for purchase on CinemaNow or by clicking the title.

PLAY MISTY FOR ME (1971) and MISERY (1990) – This is the ultimate double feature for anyone out there who plans to spend Valentine’s Day eating a bar of Velveeta and throwing darts at pictures of your past romantic partners. What could be more wickedly fun than watching obsessed fans stalk and wreak havoc on the objects of their affection – and have a good scare in the meantime!?! In PLAY MISTY FOR ME, Clint Eastwood is a disc jockey pursued by nutcase Jessica Walter; in the latter, novelist James Caan is rescued and ultimately tortured by number-one fan Kathy Bates, who won an Oscar for her performance. Like becomes love, love becomes obsession, obsession becomes psychosis, and watching a psychotic do her thing on a lonely Valentine’s evening sounds like a swell time to me! MISERY

is, of course, based on the novel by Stephen King

RUTHLESS PEOPLE (1986) – Sam and Barbara Stone are millionaires. Barbara just got kidnapped. Sam has received a ransom call demanding $500, 000 for her safe return. That should be simple enough, right? Well, Sam’s not really in any hurry to get her back. The kidnappers negotiate, Sam refuses to cooperate, Barbara gets ticked off, and hilarity ensues. This is a very rare movie indeed – a comedy that alternately and sometimes simultaneously makes you groan at its adolescent immaturity and revel in its sheer audacity and brilliance. There are a good half dozen story lines going on in RUTHLESS PEOPLE. It’s like a soap opera on laughing gas, and the way the movie intertwines each one of them is a wonder to behold. I probably laugh out loud at this movie more than any I can recall off the top of my head. Danny DeVito and Bette Midler are great, and they are surrounded by a supporting cast that is just perfect. Bill Pullman in this movie is a classic. Just be sure the kids aren’t around for this one – this is for mom and dad time only! This title is available for rental on Vudu, Google Play, or Amazon Video or available for purchase by clicking the title.

THELMA AND LOUISE (1991) – There is one line in Ridley Scott’s landmark female road movie that makes this essential anti-Valentine’s Day viewing. Geena Davis’ Thelma and Susan Sarandon’s Louise are about to lock a state trooper in the trunk of his squad car. The officer, fearful for his life, begs and pleads that they not hurt him; after all, he has a wife and kids. Before shutting the trunk door, Thelma looks at him and says, “You be sweet to them, especially your wife. My husband wasn’t sweet to me. Look how I turned out!” This is a mesmerizing movie, one of only a few I’ve seen that expertly blend drama and comedy believably, as the example above exemplifies. Thelma’s reply to the trooper is used to comic effect, but there is obviously more than a grain of truth and even pain in her response. Callie Khouri’s wonderful script is loaded with moments like this. Thelma and Louise are victims of circumstance, and it’s heartbreaking to see their downward spiral, culminating in the controversial, but in my opinion inevitable, finale. What’s most remarkable is that THELMA AND LOUISE

is ultimately a wonderfully fun experience, full of life and heart. And I think we all know someone in our lives like Thelma’s husband Darryl! This title is available for free to Starz and Encore Now subscribers, available for rental on Fandango Now, Vudu, Google Play, or Amazon Video and available for purchase by clicking the title.

THE WAR OF THE ROSES (1989) – The tagline of this movies says it all:  “Once in a lifetime comes a motion picture that makes you feel like falling in love all over again. This is not that movie.” The one word that comes to mind when I think of this movie is BRAVE. In an era when cookie-cutter romantic comedies are basically interchangeable, along comes Danny DeVito’s brilliant black comedy that breaks the mold and takes no prisoners. THE WAR OF THE ROSES chronicles the lives of Oliver and Barbara Stone, an affluent couple who have been married for decades. They literally have everything they could ever need or desire, except for love. When they decide it’s time to end the marriage and go their separate ways, a war ensues that would put Hitler and Stalin to shame. Watching this movie is like a game of truth or dare, as you keep wondering how far these people are going to go and who is going to break first. And it doesn’t let up – not even at the very end, as Barbara makes abundantly clear with one small gesture! I can’t recommend this movie highly enough – especially for those who are tired of the boy meets girl/boy loses girl/boy calls girl/girl hangs up on boy/girl plans vacation overseas/boy runs to airport to stop her/girl cries and kisses boy/boy marries girl template. This title is available for free to Encore Now subscribers, available for rental on Fandango Now, Vudu, Amazon Video, and Google Play or available for purchase on CinemaNow or by clicking the title.

What movies would you recommend for people who want to skip Valentine’s Day? 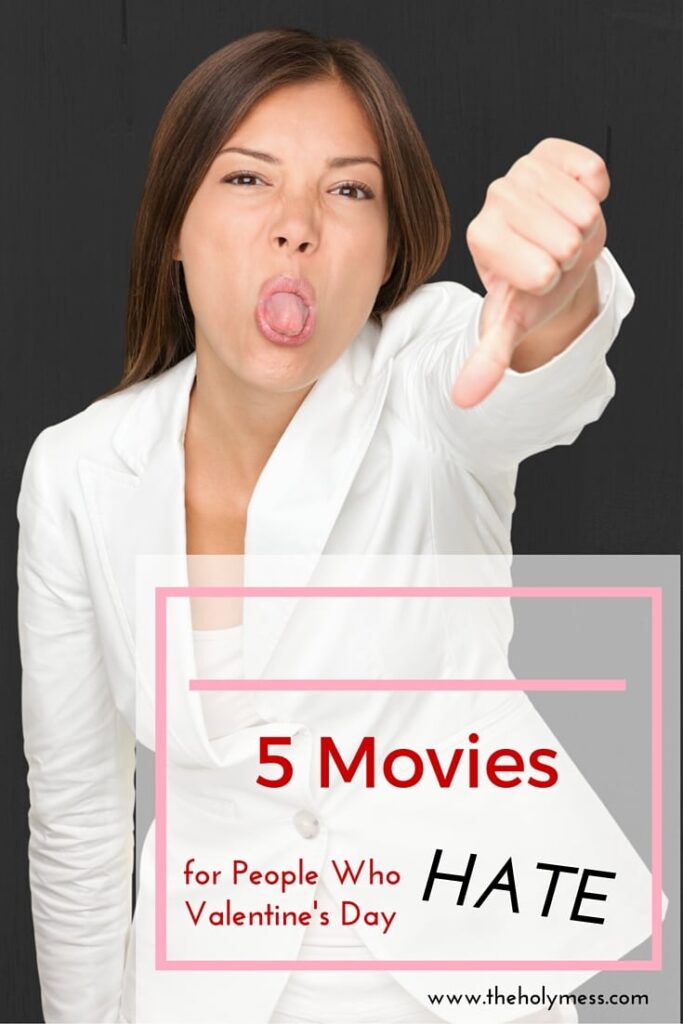