Home » Faith » Has America Lost Its Sense of Humor?

I learned a valuable lesson in my mid 20s which I think would have made my earlier years much more happy: You’ve gotta be able to laugh at yourself!

Now don’t get me wrong, I’ve always had an awesome sense of humor, if I do say so myself. One of my fondest memories of my mom (may she rest in peace) is her telling me out of the blue one day how much she appreciated and respected my humor. Even at a young age, I was always able to come up with clever commentary or a humorous remark. If I couldn’t come up with something original, I was a good enough actor to sell someone else’s idea as my own.

That being said, a good sense of humor and being able to laugh at yourself are two TOTALLY different boxes of Shredded Wheat. I tended to take myself way too seriously in my teenage years. Without going into too much detail, I wasn’t exactly the football hero in high school. I was overweight, my voice was still rather high pitched, I was a classical piano player, and as regular blog readers remember, I wore white pants and a Hawaiian shirt to my first Freshman class. There were jokes and snide remarks, and I took them to heart. As I got older, I learned to join in the laughter rather than be obliterated by it. That resulted in a certain amount of respect.

So I present to you, my loyal readers, the query burning a hole through my cranium this evening: Has America lost its sense of humor? Are we no longer able to laugh at ourselves? 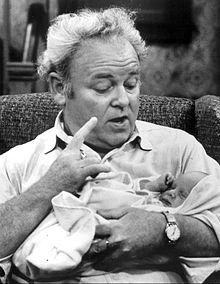 I’m not exactly sure the average age of our readership, but I’m hoping some of you may remember a television program called ALL IN THE FAMILY, a sitcom that dominated the airwaves for most of the 1970s. It was a landmark in television history and arguably the most important comedy ever to be seen in America. I believe it deserves these laurels because it had the bravery to tackle the issues of the day without a morsel of fear or trepidation. Archie Bunker, the conservative, bigoted patriarch of the family, pulled no punches. His words were outlandish, his political views unconventional for most of us, and he never felt the need to censor himself, no matter who was in the room.

And you know what we did? We LAUGHED! Sure, there were a few protests and disgruntled viewers who were offended by the reality of the show, but most of us were able to laugh at this character and as a result become more tolerable of people like him in our own lives. Not agree with them, not back up their views, but understand that the Archie Bunkers of the world are in many ways just like us – they laugh, they cry, they love their family, they want the best life possible.

It’s called satire – the use of humor and exaggeration to help us grasp the truth. Satire and comedy are powerful, powerful weapons, my friends. I’m afraid we, as a society, have become so sensitive, so politically correct, that we have become desensitized, afraid of stepping on toes.

I don’t know who said that laughter is the best medicine, and I’m not going to waste your time trying to Google it, but he or she said a cotton-pickin’ mouthful. May we all learn to find the humor in even the most dire of life’s situations.

And remember, never to dress your children in Hawaiian shirts and white pants!