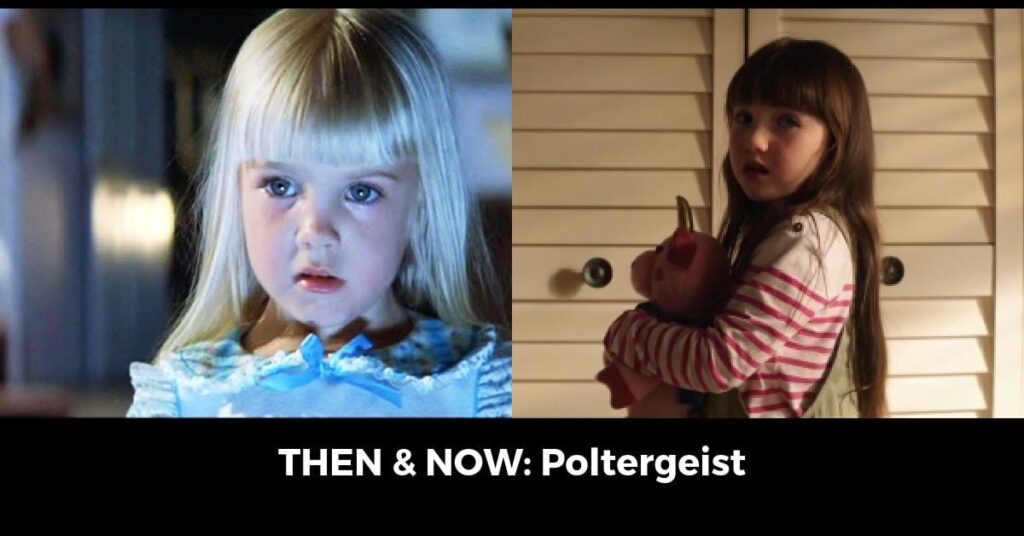 THEN & NOW is a new series that appears periodically on The Holy Mess in which I take a look at movies and their remakes.

In my first installment, I took a look at the two VACATION movies. Did you miss it? Take a look here!

More often than not, I find that the original movie is substantially better than its remake, and I think most people agree with me; my hard and fast rule is that no remake is necessary unless alterations are made to reflect the changes in society or politics or behavior that have occurred since the original movie was released.

I am very likely once again in the minority when I state emphatically that I like the original POLTERGEIST better than E.T. THE EXTRA TERRESTRIAL. They opened one week apart in the summer of 1982. Obviously E.T. took the country by storm unlike any film ever released up to that time. As a result, POLTERGEIST was largely ignored, even though it wound up becoming the 8th biggest grosser of the year. Interestingly, Steven Spielberg both directed E.T. and co-produced POLTERGEIST. This was a big year for the maverick moviemaker!

In my mind, POLTERGEIST accomplishes what very few movies I have seen succeeds at doing, namely making a horror film that could also be considered a family film. I normally shy away from movies in which children are in danger. It is usually a pet peeve of mine. And while POLTERGEIST shows very scary and disturbing scenes, it somehow manages to do so in a way that retains the intensity but doesn’t cross the line into child endangerment. It reminds me of the monkeys flying away with Dorothy in THE WIZARD OF OZ – a really frightening concept in theory but not overly frightening in execution. 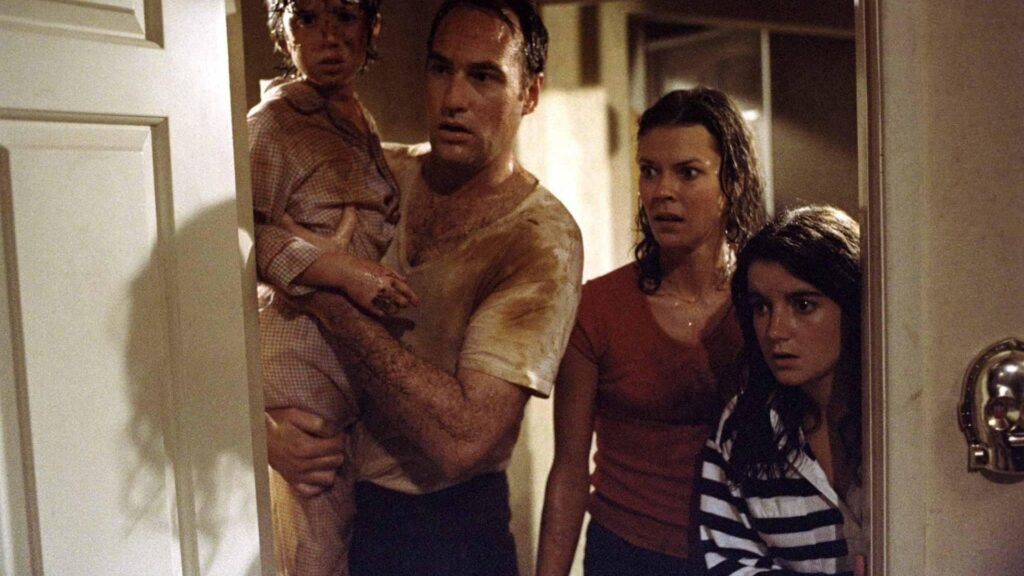 POLTERGEIST revolves around the Freeling family – dad Steven, mom Diane, and children Dana, Robbie, and Carol Anne. They live in a relatively new suburb community called Cuesta Verde in Orange County, California. As usual in these movies, it starts out with the family living a seemingly idyllic life, the worst problem being a spilt bowl of cereal at the breakfast table. Then a series of strange occurrences begin to occur: furniture begins moving by itself and silverware contorts in pretzel-like fashion. Soon the events become more threatening and eventually young Carole Anne become missing, having been kidnapped by the “TV people”. Eventually a team of parapsychologists are called in to investigate, culminating in the arrival of a medium who helps bring Carole Anne back from the other side.

The 2015 POLTERGEIST is basically the same format with a few marked differences. This time we’re introduced to the Bowens – dad Eric, mom Amy, and children Kendra, Griffin, and Madison. The family has just moved to a new home as dad just lost his job and mom is a stay-at-home writer. (It always amuses me how unemployed people in the movies are still able to afford three-story suburban homes bigger than the block on which I live.) Once again, we are introduced to an odd series of occurrences that eventually lead to creepy trees and clown dolls coming to life and wreaking all kinds of havoc. In both movies, it is discovered that the homes have been built on ancient burial grounds – the grave markers were moved but not the bodies. And the dead are none too pleased!

I was honestly optimistic for this remake. The original did a great job giving a very subtle commentary about the dangers of technology as it was entering its infant stages. And now seemed the perfect time to revitalize that conceit, as every day seems to provide a brand new step toward technology taking over society as a whole. Unfortunately, the filmmakers weren’t interested in doing anything more than a stock horror film. It’s amazing to watch these movies back to back – basically same plot, same family structure, same series of unfortunate events – and witness how one can succeed so brilliantly while the other disappoint so banally.

In the early scenes of the original POLTERGEIST, as the strange events begin to take place, there is an amazing sense of wonderment and joy in the absurdity of what’s happening. Mom Diane is so excited watching the furniture move from one side of the room to the other that she grabs a football helmet for Carol Anne and lets her become part of the gravitational pull. She turns it into an amusement park ride. That is such a great decision the filmmakers made. Not only does it feel true to life, but it gives an arc to the film as the events turn from awe-inspiring to life-threatening! 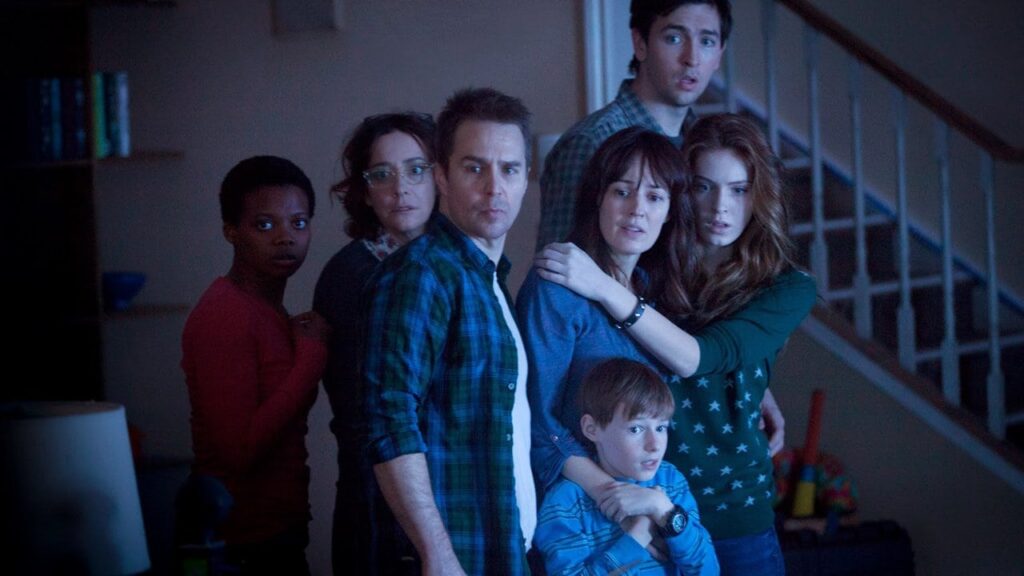 Also, I deeply cared for the characters and the family unit in the original film as opposed to the remake, which gives us a totally dysfunctional family at the outset who seemingly hate each other from the very first scene. The Freelings laugh a lot, and when they fight, there is always that core sense of family. Scenes with Steven and Diane alone illustrate a strong marriage, a couple of the 60s who have retained in many ways the mindset of their younger years. We grow close to them, and when events unfold, we naturally feel for them and these amazing circumstances that are threatening to tear them apart.

The Bowens of the remake, as I mentioned earlier, are miserable the moment the opening credits end. I felt no connection to them as individual characters or as a family. In fact, I was amazed that not once in the remake did I feel that the parents or older siblings of the missing Madison feel anything other than a vague sense of inconvenience during the whole ordeal. Sam Rockwell and Rosemarie DeWitt, the parents of the remake, are both solid actors, but I felt nothing from them in this film – a total paycheck movie!

That brings me to JoBeth Williams as Diane Freeling. These types of movies very rarely attract awards attention. They are not taken seriously as legitimate motion pictures. JoBeth Williams deserved Oscar consideration for this performance. It is one of the great performances of the 80s. She and Craig T. Nelson, who is also wonderful, have an amazing chemistry. This is a couple you want to spend time with, and they create one of the great screen couples I’ve seen. While both are great, Williams is on a whole different level than anyone else in the movie! A scene in which she and her youngest daughter somehow connect while Carol Anne is still on the “other side” gives me chills every time I see it.

I don’t give out my 5-star masterpiece rating often, but I am making an exception for the original POLTERGEIST. Like I said, these types of movies don’t often get the appreciation they deserve, but this is a movie for the ages. It contains the excitement and youthful awe of E.T. THE EXTRA TERRESTRIAL but not its tendency toward the maudlin and manipulative. Rumor has it that Spielberg pretty much directed POLTERGEIST even though credit was given to Tobe Hooper. You can definitely feel Spielberg’s hand present.

As for the remake, gotta chalk this one up to another lost opportunity. As I alluded to earlier, the remake had the potential to say something special and important, but the laziness and lack of originality of the filmmaking ruined any chance at that happening. Such a shame! In taking itself too seriously, the remake fails to engage us, and when we don’t care about the characters involved, we ultimately don’t care about the movie they inhabit. 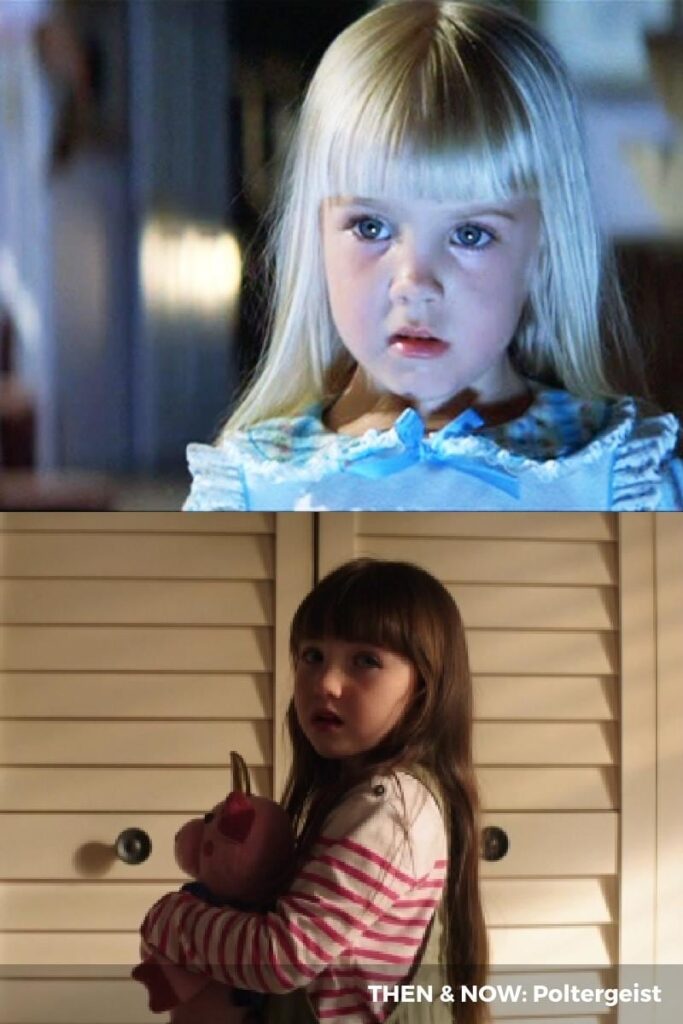