How To Get Through a Family Portrait Session 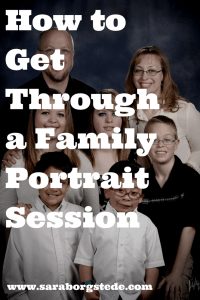 Our pictures were being taken for the church directory.  We could have just had the one complimentary photo taken. Having 7 people in the photo means our faces are the size of small dots in the directory book anyway, so this is a time that having a large family works to a Mom’s advantage. But it had been several years since we had a family photo taken, and never a professional one including Mike’s parents. Hope springs eternal.

Mike and I had spent the better part of the last two days either heated discussing or pointedly not discussing a topic that seemed infinitely important at the time. It obviously was not important since I’m writing this less than 24 hours later and now cannot remember what the topic was, but anyone who A. has been married, B. has had a sibling or C. has lived with another human being in a shared space in some capacity, understands this type of interaction.

Mike’s parents were waiting for us there looking so calm and peaceful. After signing in, our photographer Sandy introduced herself. Sandy was calm and quiet. Demure, even. Oh dear, I thought. Sandy, Sandy, we need to have a chat, I wanted to say. These Borgstede boys need a firm presence. Don’t be too nice.

We began an hour of Mom, we’ll have you here. Big sister, lean in. Keep leaning, Keep leaning. Stop! Zack, tilt your chin down. Little brother, look to the right. The other little brother. Paul, push your glasses up. But I don’t wear glasses!? Whoever you are! Other sister, brush your hair out of your eyes. Moms like to see eyes and moms buy pictures! Say trees! Zack put your chin down. Lean in. There, looks great. So natural! Perfect! Wait, eyes closed. Let’s take that one again. Come on. Boys! Boys!! We’re behind schedule! Zack, stand up! Look at the camera! Boys!!!

Sandy found her strong voice. I was proud of her. We ended the day with a ridiculously expensive CD of pictures, some halfway decent family photos, one awesome photo of every kid (totally worth it!), and perhaps, after kid bedtime, a piece or two…or three..of break and bake cookie dough for Mom.

And that, my friends, is how to get through a family portrait session.