Home » Family » Special Needs Parenting » Never Say This to Someone Who is Hurting…(But Say This Instead). 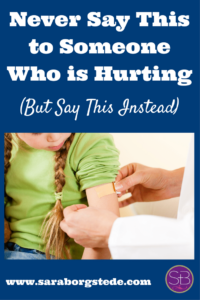 This morning Mike and I corralled our son (kind of gently sat on) in order to remove a splinter from his finger. Extracting a teeny brown sliver of wood from a flailing 60 pound mass of ten year old is no small task. I had just returned from my morning swim and was now engaged in a second workout of the day.

Never Say This to Someone Who is Hurting.

As he kicked and hollered, I found these words on the tip of my tongue,

I’ve said this to my kids plenty of times with little thought. I’m sure I’ve said it (in other forms) to my husband, to friends, or to family.

I shouldn’t. It’s a put-down. To my son in that moment, that splinter is a tree trunk. It’s his pain, it’s big and it’s real.

Just in time I caught myself and said to him instead,

We acknowledge what he is going through IS difficult and painful, but God has given him the resources to deal with it. My son is learning he is able to face this challenge and he will have more courage to face the next one. Life is hard and it’s supposed to be hard. There’s no reason to pretend it’s any less.

A few tears (mine), possibly a bruised shin (also mine), a Star Wars Band-Aid, and the day begins.

What do you say to someone who is hurting? What has been most helpful that someone has said to you?