Last night I sat at the kitchen table and told my husband, “I am racist.” He looked at me in shock. “I don’t see you as racist,” he told me. But he didn’t change my mind.

The truth is that I have been racist…and I want to do better. 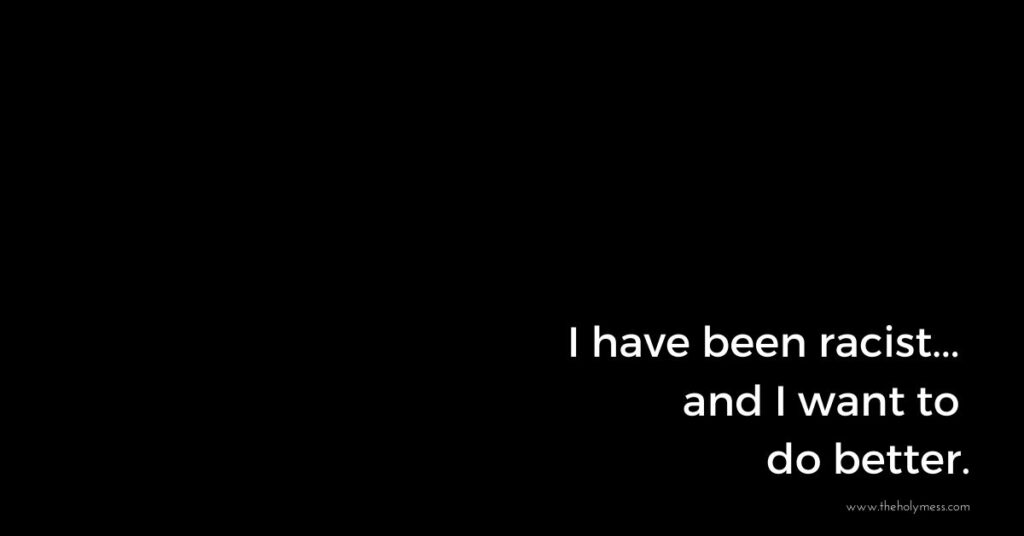 In the last days, our country has been reeling in pain after the death of George Floyd on May 25, 2020, a black man who was arrested and murdered by the white police officers taking him into custody. There have been protests, both peaceful and violent. There has been looting and destruction.

While I don’t in any way condone violence or property damage, what I see is a country shaken to the core and that’s not a bad thing because the oppression, racism, classism, and discrimination has to stop.

And it has to start with me.

In the last few days on social media, I’ve seen people talking about how they won’t allow racism among their friends, family, and community anymore.

That’s a step, but my hope is that this post will encourage you to take it further.

Will you humble yourself enough to acknowledge the ways you have been racist and contributed to the problem? Will you own your stuff? Will you pledge to do better? Are you willing to work toward correcting the deeper problems and systems, even if it’s painful and uncomfortable? 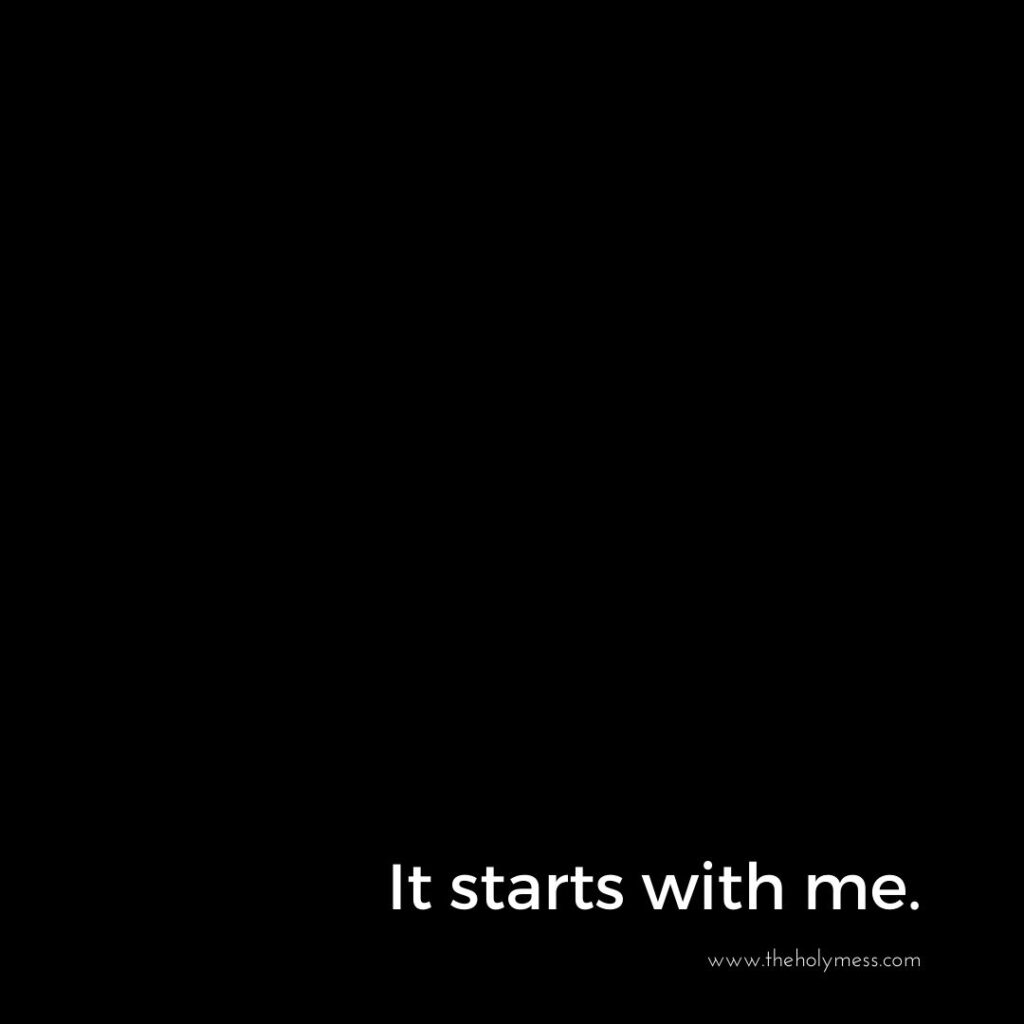 The Problem with “I’m Not Racist Because…”

Over these last days, it’s been super-tempting to start off my internal conversations with, “I’m not racist because…”

Have you said any of these things to yourself?

You can still be racist, though.

People who know me personally might be shocked to hear me say I’ve been racist. Two of my sons are adopted from foster care and have skin a different color from mine. During our years as foster parents we welcomed babies who were black, brown, and a variety of colors in between.

My first teaching job was to a small, inner-city St. Louis school where my face was one of the only white ones in a sea of black ones. I worked as a social worker for years at an agency with a strong stance of inclusion.

But that doesn’t mean I haven’t been racist.

Growing Up with Racism

I was raised by a dad who did many things right, but he was deeply racist. I was told not to ever date a boy with long hair or an earring and whatever you do, don’t bring home someone who is black.

I would love to say that I’ve moved beyond this type of thinking, but it would be a lie. Prejudice becomes deeply ingrained in a person’s thinking in ways you don’t even recognize.

That’s been true for me.

I Have Been Racist…

I hate sharing what I’m about to tell you.

I’ve resisted publishing this blog post even though I felt God calling me to write it.

But I’m calling for truth and that means starting with me.

These are some ways that I’ve been racist.

I’ve spent most of my life in churches, schools, and neighborhoods that were mostly white and I wasn’t troubled by it. I didn’t try to change it or even question it.

In college, I took a required class about inclusion (a relatively new concept at the time) as part of my training to become a teacher. We argued down and ridiculed the professor mercilessly. We, a group of white, upper-class students told her that her ideas were ridiculous and the class was a waste of time. I’m embarrassed now to think of our behavior.

I’ve rolled my eyes at inclusion training at work.

I’ve complained about affirmative action and called it reverse discrimination.

I’ve lamented the fact that my white son might be overlooked for opportunities.

Once, driving through a run-down neighborhood I saw a black man crossing the street and I reached across to quickly lock my door. He caught my eye and shook his head when he saw what I did. At the time, I felt completely justified and couldn’t understand his problem.

I’ve referred to someone in conversation as “that big black guy” as if that was a respectful way to refer to a person.

I’ve failed to immerse my children who are adopted more deeply in their cultures because it was awkward and I used the excuse that I didn’t know how.

I’ve assumed negative things about people of different skin colors, like that they are violent or poor or expecting a handout.

I’ve allowed the assumption that I deserve what I have because I worked hard for it and have ignored any role that white privilege played in my success.

What God Says about Race

The Bible is clear that all people are equal in God’s eyes. Romans 10:12 says, “For there is no distinction between Jew and Greek; for the same Lord is Lord of all, bestowing his riches on all who call on him.”

Justice matters to God and if you are a Christian it must matter to you. You are not allowed to ignore, justify, or trivialize those are oppressed.

This starts with confession of the racism inside of you.

God is calling you to repent from your sinful behavior. Rather than blaming the other person or spouting rhetoric, you need to repent, and so do I.

Repentance means changing your behavior. How will you turn your thoughts, words and actions around so that you do better in the future?

I Want to Do Better

I have been racist and I am sorry.

I vow to spend time in the next days looking at my thoughts, my words, and my behavior. I will re-examine my business, my church, and the ways I spend my time and money.

I will do what I can to right this wrong.

I will strive to understand.

This issue isn’t about me. I share in the hope of allowing others to see that even those of us who appear inclusive on the outside might be harboring plenty of racism on the inside.

I invite black women and other people of color to share your opinions and experiences in the comments, on social media, and via email ([email protected]). I encourage continued conversation. I want to hear you and I want learn from you.

If you have been racist, are you willing to become part of the solution? Share in the comments below. 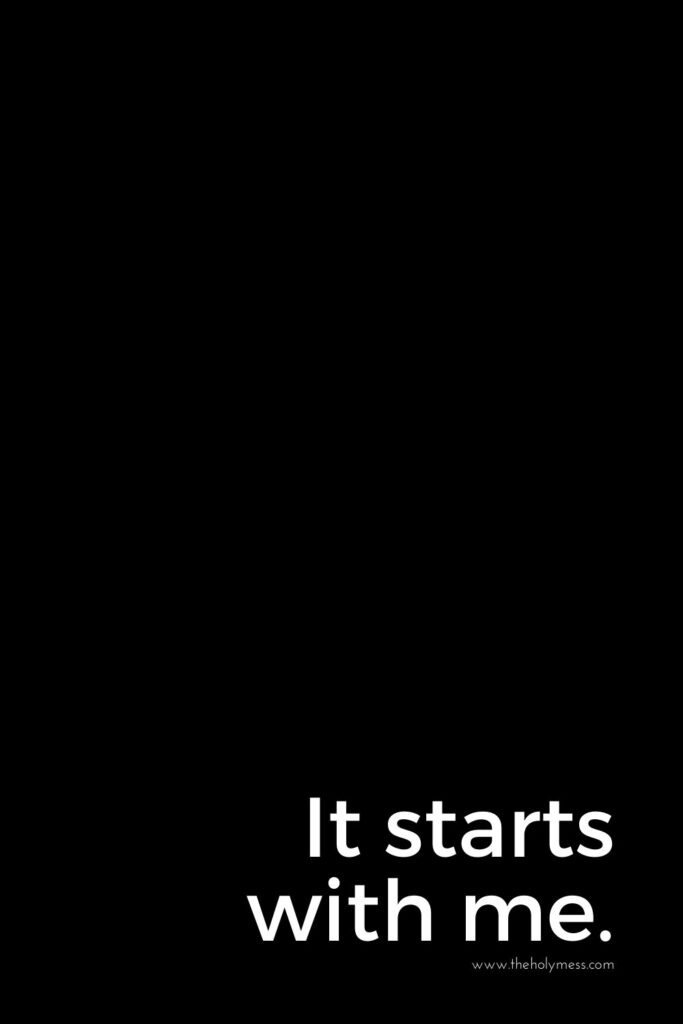