Home » Recipes » Where’s a Phone Booth When You Need One?

This has nothing to do with today’s blog, but I just bought four boxes of Barilla white fiber pasta at the grocery store. Regular $1.49 and I got them for $0.65 each. Three times more fiber than their regular pasta – same great taste. I’m so excited I can hardly see straight. Fiber excites me. Regularity makes me happy – if only because I’m so irregularly regular. Welcome to being in your 40s! In a few years I’ll be buying COLON BLOW cereal.

Seriously though, if you are ever constipated, I have the perfect solution – straight from my grandmother, may she rest in peace. And we all know that grandmas know everything.

I lovingly refer to it as Constipation Casserole. It’s right between Coke Salad and Cranberry Pumpkin Bread in the recipe book I made of Roberta’s concoctions. You mix 2 cups of bran, 2 cups of applesauce, and 1 cup of prune juice. Refrigerate. Take 2 or 3 tablespoons every night and you’re life will never be the same. My grandpa ate it every night before bed and in the morning he would be indisposed for hours. I think that was her plot!

Anyway, back to the subject at hand.

Where’s a Phone Booth When You Need One?

I have a horror story to tell you. It’s scarier than anything you’ll see on Halloween — more frightening than Michael Meyers and Freddy Krueger and Angelina Jolie’s lips combined. I literally shiver as I write this…

I LOST MY PHONE AT THE NEIGHBORHOOD KROGER GROCERY STORE. 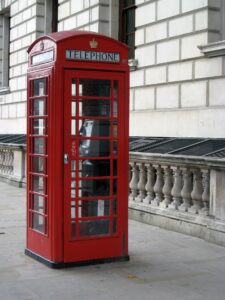 Do Phone Booths Even Exist Anymore?

Screams of terror. Rattling of chains. Gasps from the audience. Children are crying and television stations have gone black.

Now, I like to think of myself under normal circumstances as a laid back, go with the flow, laugh and the world laughs with you, rainy days and Mondays always get me down, everybody wang chung tonight kind of guy.

I don’t stand up and cheer at baseball games. I don’t go into hysterics when someone cuts me off on the highway. I did scare the neighbors when Meryl Streep won her third Oscar, but that’s just the exception to prove the rule.

When I got into my car after getting some items for lunch and saw my wallet and keys but no phone, I got heart palpitations. I began to sweat profusely and shake like a naked Eskimo.

Then I began to think. I didn’t specifically remember bringing the phone with me. Perhaps I had left it at my niece’s house, which is where I began my journey in the first place. So I floored it, going at least 94 MPH back to the house – praying, making deals with God, and retracing my steps in slow motion.

I pulled into the driveway, ran into the house without even shutting off the car, and yelled for everyone to start calling my phone. I ran into every room of the house, all over the yard, listened at the neighbors’ windows.

So I floored it back to the grocery store. Picture me standing in line at the customer service counter behind 47 people who each had to buy 11 money orders and a paycheck’s worth of lottery tickets. It was finally my turn. I quiveringly asked if anyone had turned in a missing phone.

Miss Customer Service, without even looking up to catch my tear stained glance, said, and I quote, “Nope. Next.”

I was aghast! The world was coming to an end, and she didn’t even care enough to offer me a condolence gift certificate.

I won’t bore you (too late!) with the details of the next couple hours, but they were spent in the AT&T store, Disc Replay, and two grief counseling offices.

Finally, in a last moment of hope, I made one more trip to Kroger just in case some saint had found my phone and, after having been unable to guess my passcode, turned it into lost and found. I got in line behind the same people buying the same money orders and the same lottery tickets.

Out of the corner of my eye I noticed a rectangular black object on the back counter which looked an awful lot like my phone. I could hardly get out the words, “Has anyone turned in a missing phone?”

Miss Customer Service said, and I quote, “Yep. Here. Next.”

Angels wept, the Hallelujah chorus started playing instead of Muskrat Love on the Muzak, and suddenly the world was at peace.

If only for a moment.

In hindsight, as scary as it was to lose my phone, I was more scared by my reaction. Life can and will go on without Words With Friends. There are millions of things more important in life than the lovely sound of Siri’s voice. Yet I panicked as if I lost my nephew at the Lego store. Really makes you stop and think!

Where are my priorities?

Would I have had the same reaction if I lost something even more important – a relationship? a friendship? my faith?

Have you ever lost your cell phone?