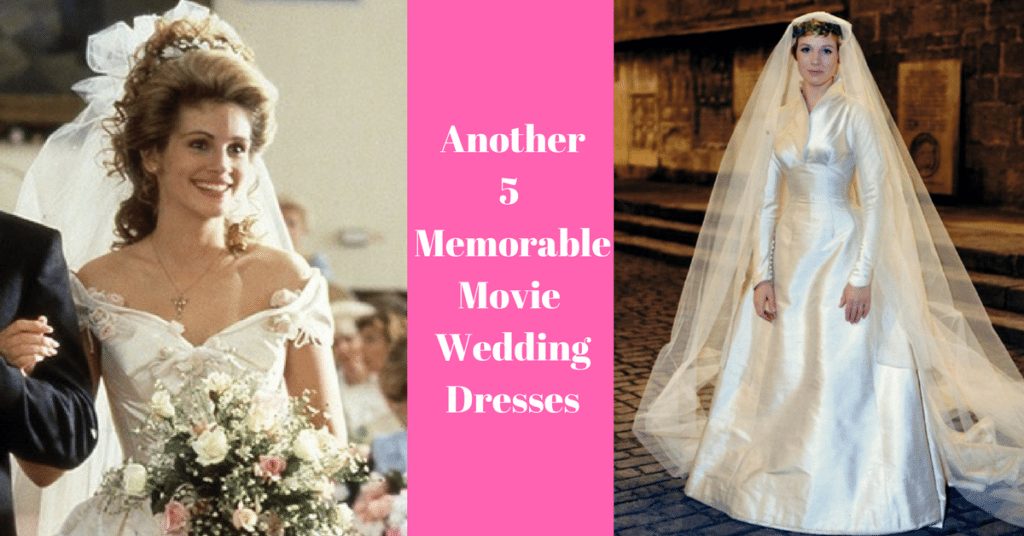 Two weeks ago, I published a blog highlighting ten memorable movie wedding dresses. You may remember that my niece Mariah recently got engaged and said YES TO THE DRESS so I wanted to do a blog in her honor.

Well, it was made very clear to me by some of our readers that I was remiss in omitting some iconic gowns. Always wanting to make my readers happy, I decided to jump back in the well again and give you a nice little bonus – another five memorable movie wedding dresses.

A big thanks to those of you who took the time to comment and make suggestions. This sequel is dedicated to you!

Julie Andrews in THE SOUND OF MUSIC 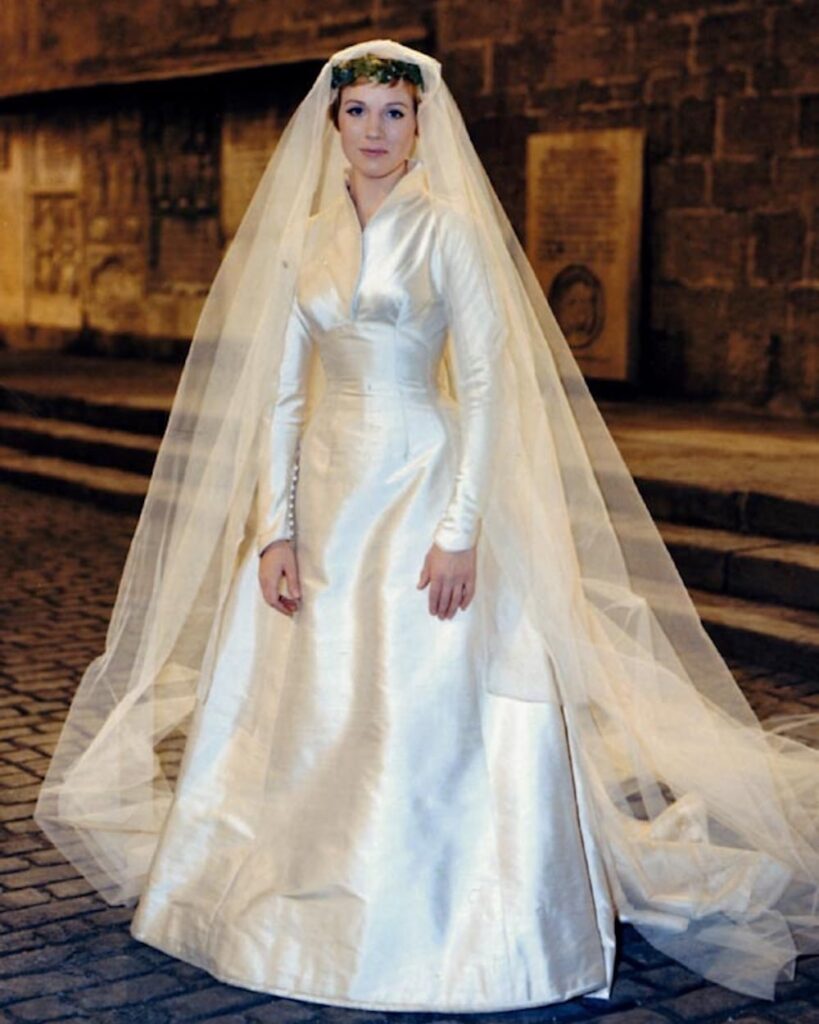 I don’t know if people nowadays quite understand the extraordinary popularity of Julie Andrews during the 1960s, which probably climaxed with her one-two punch of MARY POPPINS in 1964 and THE SOUND OF MUSIC in 1965.

Robert Wise’s Best Picture-winning adaptation of the Rodgers and Hammerstein Broadway sensation has obviously grown over the decades to become one of the most beloved motion pictures of all time, and Andrews’ iconic wedding dress is the stuff of legend.

Julie has stated that she felt even more beautiful in this dress than she did on her own wedding day, and costumer designer Dorothy Jeakins was Oscar-nominated for her work in this classic. 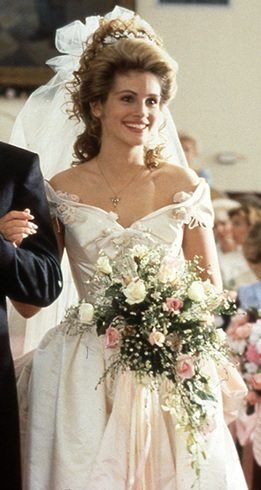 Do you remember the colors Shelby Eatenton chose for her wedding in this movie? Of course, any true fan will remember that they were blush and bashful – two shades of pink, her “signature color”.

Julia Roberts had only made a couple movies before her breakout role in screenwriter Robert Harling’s fictional dramatization of his own sister. Roberts beat out more popular (at the time) actresses such as Meg Ryan and Winona Ryder, and she received her first Oscar nomination. Less than a year later, PRETTY WOMAN would be released, and she would become one of the most familiar faces in movie history.

The first quarter of this movie centers around the wedding of Shelby Eatenton to Jackson Latcherie, and Roberts was certainly a vision as she walked down the aisle.

Katherine Ross in THE GRADUATE 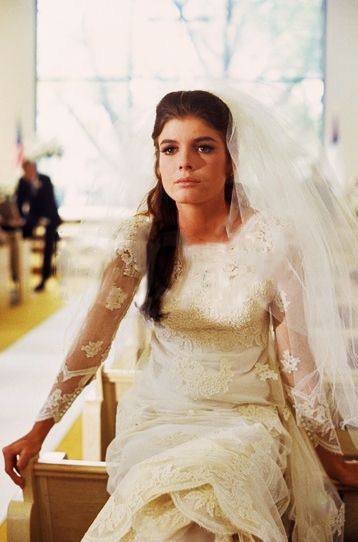 Anyone who has seen the late great Mike Nichols’ Oscar-winning film will surely remember the final scene of Dustin Hoffman and Katherine Ross riding in the back of a city bus. Only moments earlier she had been standing in the front of a church preparing to share her vows with another man.

In many ways, Ross has a thankless role in this film, as attention is obviously directed toward Anne Bancroft’s Mrs. Robinson trying to seduce Hoffman’s Benjamin Braddock.

Nevertheless, her wedding look appears to bridge the gap between the regality and elegance of the preceding decade with the hippie and flower child years that are right around the corner. Incidentally, Ross in real life has been married for over 30 years to actor Sam Elliott, the heartthrob of the middle age set. 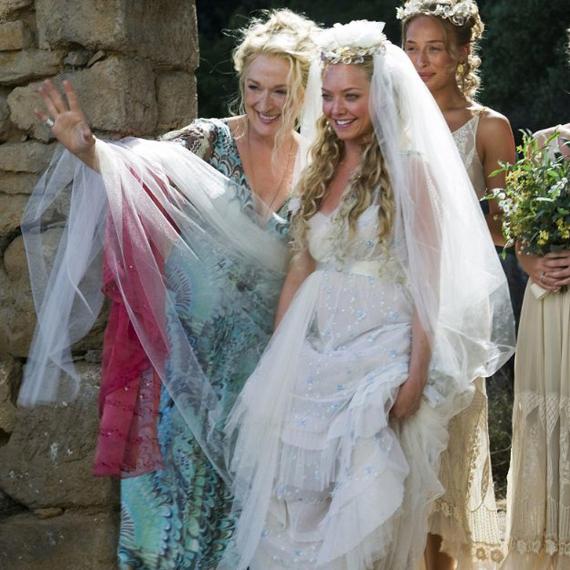 Amanda Seyfried may have spent the majority of this movie trying to figure out the identity of her father, but any dad would be bursting with pride to see his daughter looking so lovely. She truly was as beautiful as the Greek backdrop of the story itself.

Another film based on a Broadway musical, the irresistible tunes of ABBA create the backbone for an admittedly slight, and I suppose morally questionable, but thoroughly enjoyable time at the movies.

I’m not sure if there will be any nuptials in the recently announced sequel scheduled to come out next summer, but if there are, it will be difficult to top this dress designed by legendary costume mistress Ann Roth.

Robin Wright in THE PRINCESS BRIDE 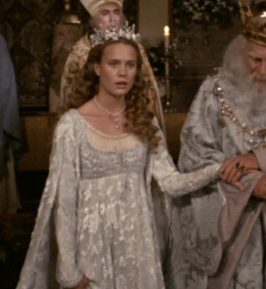 When people ask me about iconic movies I haven’t seen yet, I tend to get the most shock and appall from those who discover I have yet to dive into the world of Princess Buttercup, Inigo Montoya and the other characters of Rob Reiner’s 1987 storybook tale.

I don’t have much to say since I haven’t watched the movie, but so many people cite it as one of their favorite films ever, and I bristled at the possible backlash if I didn’t include Robin Wright on EITHER of my lists.

She looks very lovely, not to mention very young, especially seeing her much more recently in HOUSE OF CARDS on Netflix and WONDER WOMAN. Costume designer Phyllis Dalton actually has two Oscars under her belt for DOCTOR ZHIVAGO in 1965 and HENRY V in 1989. 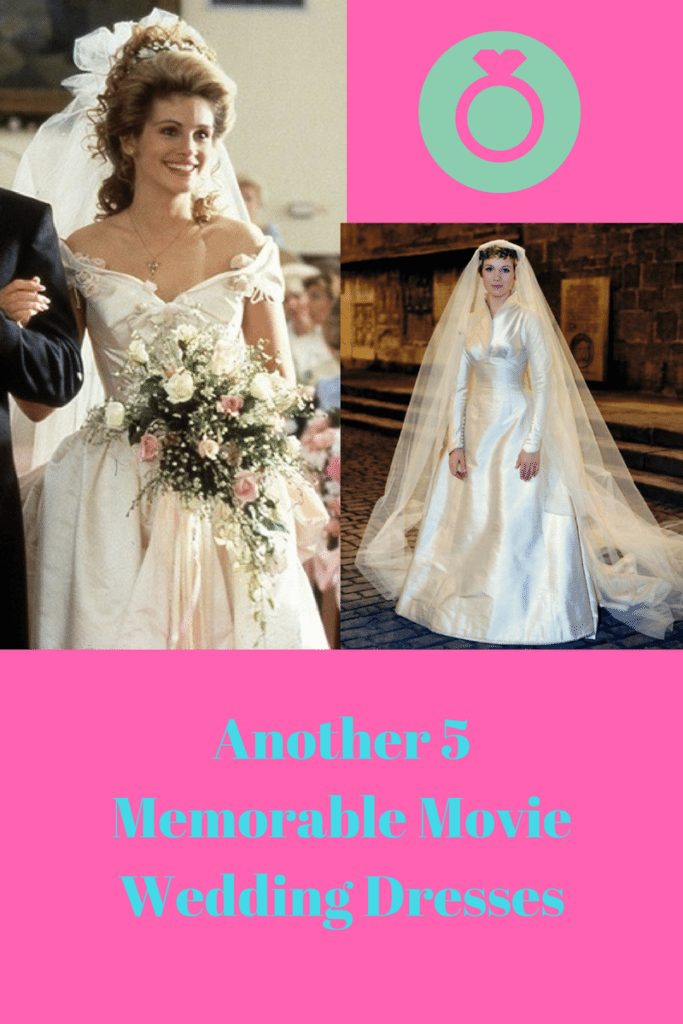