If so, at what age is it considered safe?

Last week I wrote a post here asking that question: Do You Let Your Kids Walk Home from School Alone?

I’ll summarize comments that were shared across various social media, some research I found, and then I’ll share my opinion. Keep in mind I’m a blogger not a journalist, so while I’ve made an honest effort to give this a fair look from all sides, at the end of the day I think people come to blogs to read opinions and I get to give mine.

I discovered there is a huge variation in parenting around this topic.

Some of the comments shared:

This link  is an excellent article from the Lifehacker blog with a survey of 4,000+ parents asking the same question, “Do you let your kids walk to school or play out side alone?” and is one of the most comprehensive, recent sources I found. From this survey, 75% of parents do allow their children to walk to school alone and 25% do not.

Consider these two overarching sides of the conversation:

1. Allowing kids with walk home promotes independence and is actually quite safe.

Of parents in favor of allowing their children to walk to school alone, many clarified this includes allowing children to walk home after a certain age (generally middle school, but sometimes sooner), only with other children, and sometimes depending on safety of neighborhood –including distance from school and available sidewalks.

This NPR story tells of a mom who allowed her 9 year old son to ride the New York subway alone — and the debate that was waged when the story hit the news. To those of us who live in the suburbs, the idea of a child riding the subway alone sends a ripple of terror through our parental skin, but the subway is her family’s main source of transportation in her neighborhood. Her argument is that her son is actually safer if he knows how to navigate through the subway system, how to ask for help, and how to read the maps, instead of only relying on his parents to lead him.

Perhaps the biggest argument for the need for continual adult supervision is what I officially term The world’s gone to hell in a handbasket philosophy, which is that there are so many more crazy people out there these days doing awful things to children, and it’s our job as parents and caregivers to keep our kids safe. Every day we turn on the news and hear of another missing child, an abduction, or some other terrible incident. This got me curious — are children in more danger than “in the good old days”?

The opposite is actually true, and to an extreme. Crimes in general and especially against children have been steadily decreasing since the 1990s.

Murders of children by abductors constitute less than one half of 1% of all murders in America.

Moral: Your safest bet is to leave your child with a stranger.
SOURCE: http://bjs.ojp.usdoj.gov/content/homicide/children.cfm and http://www.bjs.gov/content/pub/pdf/htus8008.pdf

There is approximately one child abduction murder for every 10,000 reports of a missing child. (Source: Polly Klaas Foundation:http://www.pollyklaas.org/media/pdf/Abduction-Homicide-Study.pdf)

Put it another way: The Department of Justice reports that of the 800,000 children reported “missing” in the United States each year, 115 are the result of “stereotypical kidnapping” — a stranger snatching the child. About 90 percent of abductees return home within 24 hours and the vast majority are teenage runaways.

Think of it this way, your child is in more danger riding in the car with you while driving to school than walking to school alone.

Slightly aside, but here is a neat idea I found while researching called a Walking School Bus. With obesity rates on the rise, more school districts are encouraging walking and biking to school once again as a way to increase fitness. Great way to get to know your neighbors better, too!

2. I don’t care what the facts are. I’m not comfortable with it and I’m not doing it.

The second thought seems to have less statistics and facts to back it up yet comes from the gut-feeling side of parenting that says, “This makes me nervous and I’m just not doing it.” My kids, my decision. Period.

Concerns expressed included not only what strangers might do, but also what the children themselves might do (getting into trouble), and bullying from other children.

My take? I’m in favor of kids walking to and from school when they are mature enough to do so. There’s no exact age but generally middle school has been the right age for our kids. Safety in numbers is great when possible, but sometimes for logistical reasons it might not work out 100% of the time, and an older middle schooler or teen can safely walk home alone. Look, a 16 year old can drive a car. An 18 year old can join the military and shoot a gun. It’s time to allow them to walk home from school unattended.

As much as we long to protect our children forever, it’s impossible. It’s also not within our power, as much as we would like to sometimes pretend it is. We are raising a generation of kids wrapped in proverbial bubble wrap. They are growing up, moving out, and moving right back home again, unequipped to deal with the real world.

No matter what you choose as a parent, at the end of the day each of us as parents has to do what feels right for us and ultimately live with our decisions. 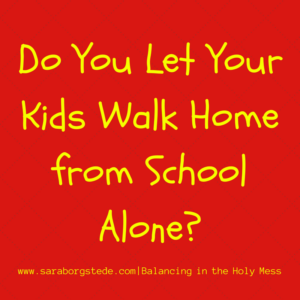 What do you think, readers? Share your opinion about this topic in the comments below.