Cathy Hooper is an example of how one healthy step leads to the next one. She never thought running was for her. Then Cathy Hooper learned BodyPump makes running possible because she strengthened her leg muscles for the task.
Meet Cathy, the next fitness inspiration in the Fitness Over 50 series. Whether running is your goal or not, Cathy has great advice for staying fit and active. 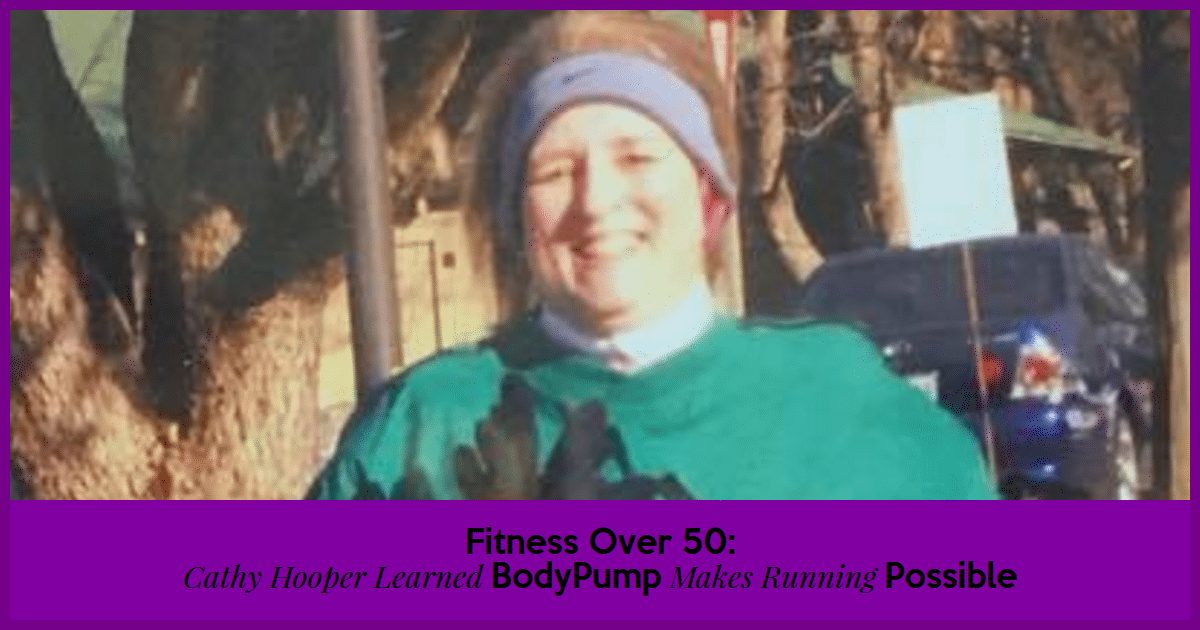 Sara: How do you stay fit in this season of your life?

Cathy: I do Body Pump ( a weight/cardio class) twice a week and I run at least twice a week. 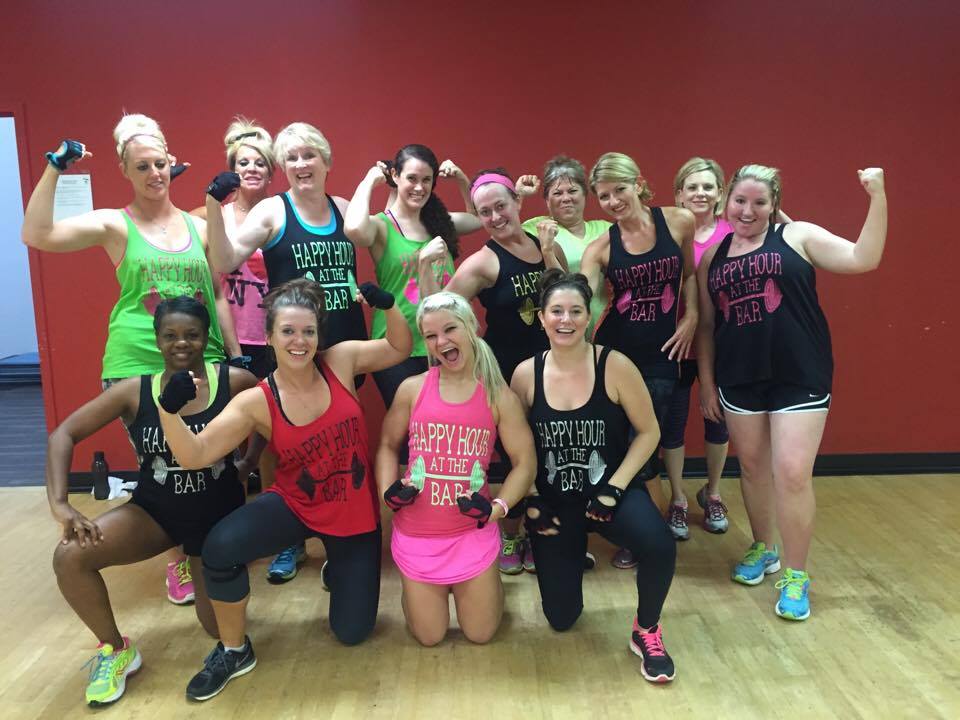 Sara: Have you always been fit and active? What drew you into it?

Cathy: Absolutely not. I always thought I was clumsy and athletic and never did any sports in school. I tried running a time or two after I was grown, but it was hard so I thought I couldn’t do it. When my daughter went off to college she challenged me to run a 5K with her over Christmas break. Wanting to do anything to stay connected to her I agreed. I downloaded podcasts for couch to 5K on my ipod Nano and went to the gym. I thought running hurt my knees too much so I did most of my training on the elliptical. At the end of the 12 weeks C to 5K program I could run for 30 minutes but that wasn’t 3.1 miles! We did the 5K and it was 16 degrees that day. 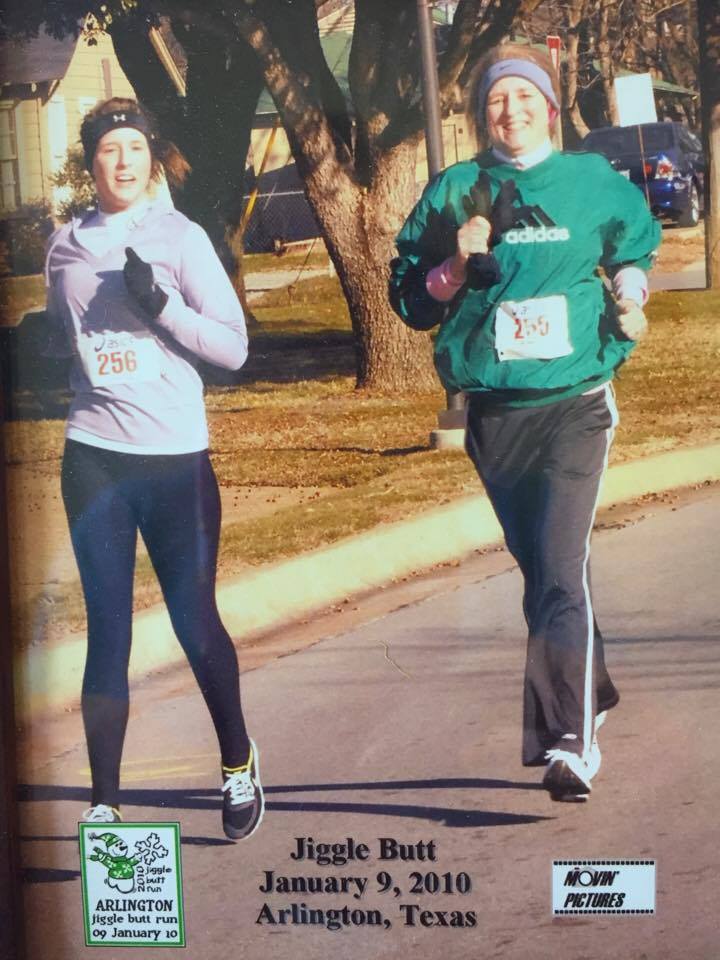 “JiggleButt 5K” Even though it was only 16 degrees that day, Cathy says she wore way too many layers and was way too hot!

I finished. That was January of 2010.
After that I would challenge myself to run a 5K occasionally when a cause came up that I was interested in. I usually did about one a year. I would work out for a few months getting in shape, run/walk it, then do nothing for months.
About 2 years ago I happened on a Body Pump class. I had been doing weights some on my own and thought this would be helpful. I found out I loved being a part of a class. After almost a year of Body Pump, I tried running again and was amazed at how much easier it was. I still couldn’t run too far or too fast, but building up my leg muscles stopped my knees from hurting when I ran. About that time I joined a group of several people who ran or walked in the early morning. I was in the middle of the pack as far as fitness level. Actually nearer the back. I would run as far as I could then walk, then run again. Eventually with the encouragement of another runner I could run the whole 2 mile route. Our group has dwindled to three and we now go three miles, but I can run the whole way.

At the beginning of 2016, I set a goal of running a 5K (either an organized run or my own personal) at least once a month. It was a struggle and I walked almost as much as I ran. My time on Jan. 1 was 44:14. Now this is when I joined the running group. As the year progressed I was running more and farther. By December that goal was far surpassed as I ran 7 times that month with each run being at least 3.1 miles. I ran a total of 349.95 miles in 2016. (It kills me I din’t get that final .05 in.) 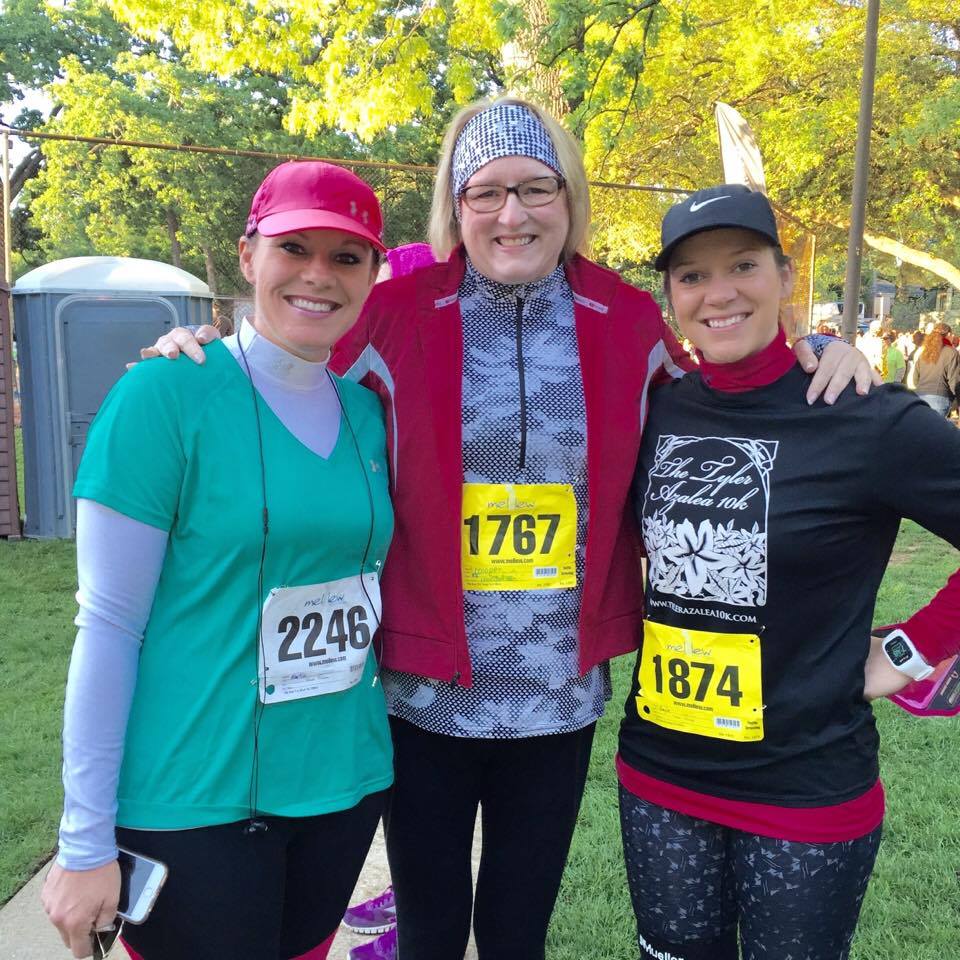 Running a 10K! What a personal accomplishment. 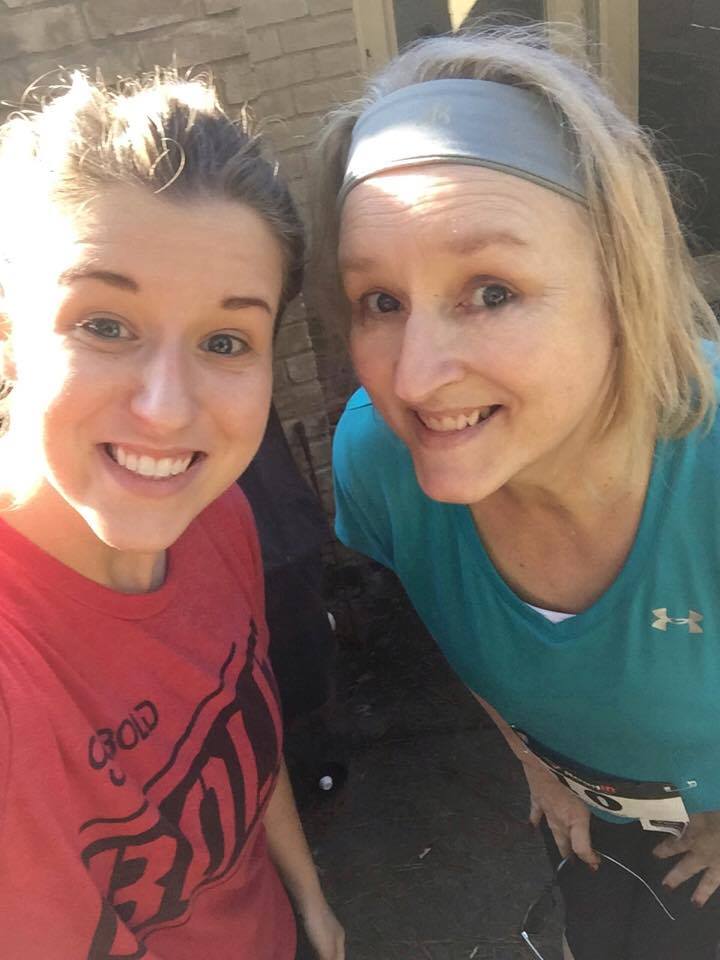 Cathy and her daughter 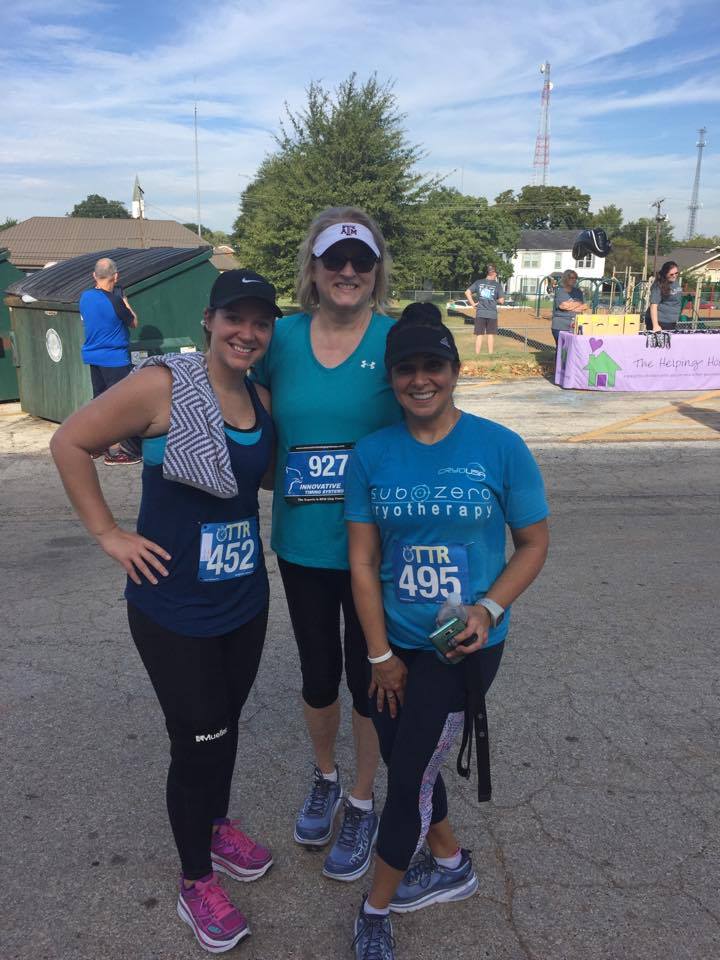 Cathy at a 10K for Autism with two of her BodyPump instructors. 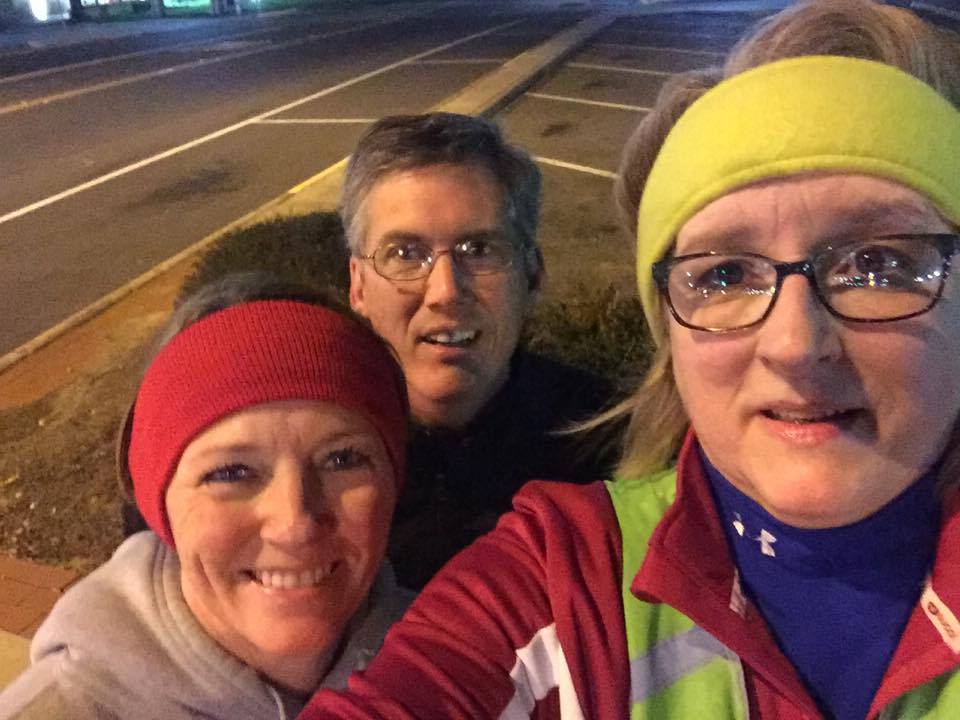 Sara: What would you say to a woman who says, “It’s too late for me to start now. I’m too old.”

Cathy: I was 49 when I started (that first 5K), and 55 when I really started running. It is never too late. There is an 80 year old woman in my Body Pump class who can do better push ups than I can. Just start with a challenging but doable goal. Finishing a 5K is pretty doable for most people even if you walk the whole way.

Sara: Tell us about a highlight moment of achievement that stands out for you.

Cathy: Just looking back at my running log for the year and seeing my progress was a biggie. The first 10K was pretty awesome too.

Sara: Is there anything else you want to share?

Cathy: You don’t have to run. You don’t have to lift heavy weights. But you have to do something, and a combo or cardio and weight bearing is best. I don’t always enjoy exercise–especially the running. Actually most of the time, I despise the running. I like it when I am on my way to work and I can think “Two hours ago I was running down this street.” Yeah that makes me feel pretty good.The feeling of setting a goal and killing it is awesome. Also,  I do it because I feel better, it is medicine for me ( I am diabetic, and it helps keep my sugar levels down), and it makes look fitter (yes a little vanity comes into play). I also love encouraging others to become fitter.
Do you know a woman who exemplifies fitness over the age of 50? Tell me about her so she can be highlighted in our series! 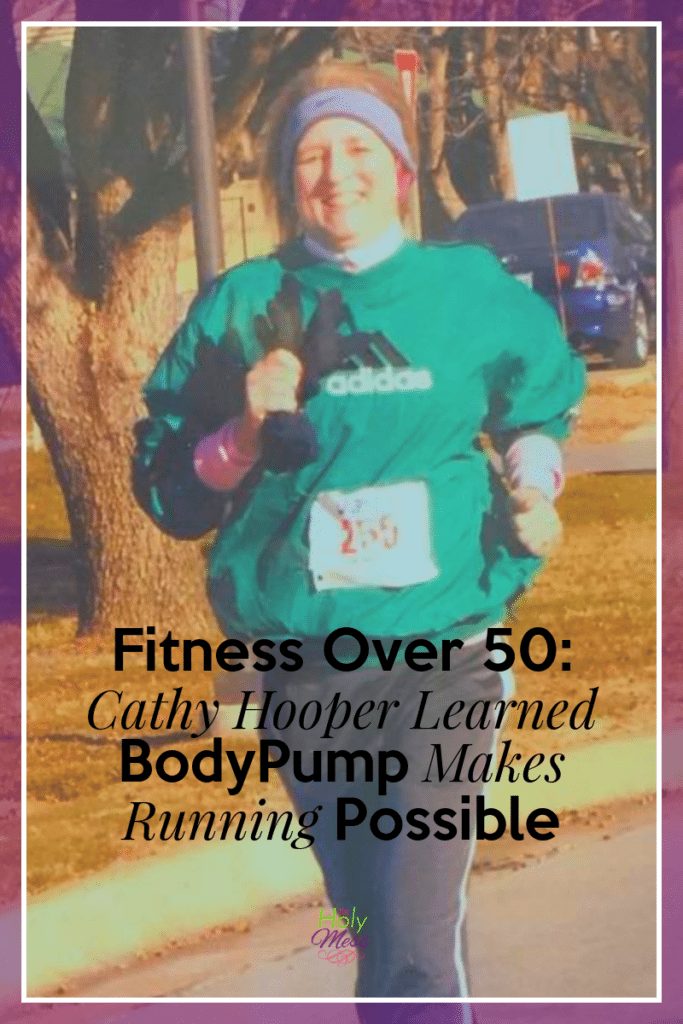