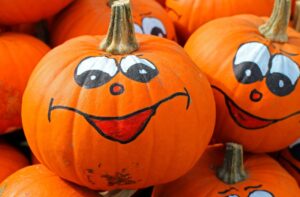 I originally intended to publish this blog later in the year, closer to the end of October. That being said, when I walk into Hobby Lobby in August and see Christmas trees and decorations being prepared to sell, I have no qualms talking about Halloween in September.

I have never liked it. I am borderline hate, but I’m not quite ready to use the “H” word – it is reserved for worser things like Steven Seagal movies, wet bread, and people who blow their noses in public and sound like Dizzy Gillespie doing a trumpet solo.

My mom also disliked Halloween – with a passion – so maybe that is part of my disdain for the holiday. In fact, she refused to call it Halloween – she would always refer to it as Harvest. God rest her soul, but little kids dressed like Teenage Mutant Ninja Turtles saying HAPPY HARVEST just isn’t going to cut it.

What’s strange is that Halloween would seem to be a holiday that is right up my poorly paved, dimly lit alley. I mean, come on – it centers around chocolate. HELLO! Although I don’t have to wait till October 31 to threaten a stranger unless they give me a Mr. Goodbar. That has happened pretty much every weekend for the majority of my life.

I also recall going through a three-minute rebellious period during my late teens, and I dressed up like a streaker at a church sponsored Halloween party. I was obviously asked to leave, as well I should have. I came back as a garbage man. Not one of my finer moments as I review mental clips for my THIS IS YOUR LIFE episode.

I think a lot of my trouble with Halloween is the emphasis on so many dark and disturbing creatures – serial killers, vampires, witches, Donald Trump… If I were forced at gunpoint to put on a costume for Halloween at this point in my life, I would totally put on a pair of khaki pants and go as a State Farm salesman.

I will always have the porch light off on October 31. I will always be known as Old Man Marshall who hides under a blanket with a block of Velveeta when he hears little imps dressed like Strawberry Shortcake walking down the avenue.

I am destined to be tee-peed or egged or fiery dog pooped for the remainder of my life.

However, if anybody has some extra chocolate, let me know and I’ll private message you my mailing address…