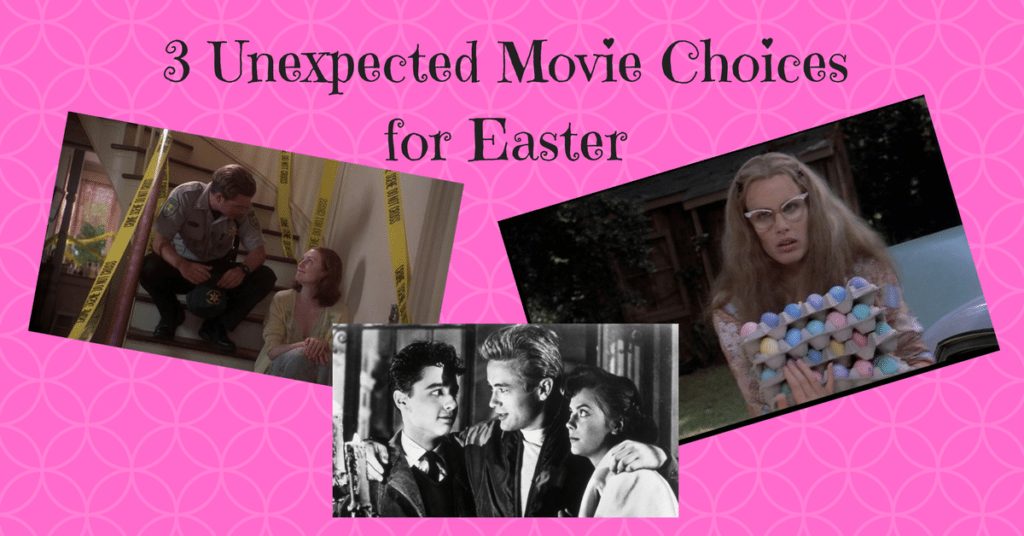 Unless your tradition is to watch one of the big Biblical epics like THE TEN COMMANDMENTS or KING OF KINGS on Easter weekend, this particular holiday doesn’t seem to offer as many cinematic choices as other holidays such as Thanksgiving, New Year’s Eve and certainly Christmas.

Nevertheless, if you look hard enough, you can find a few unexpected movie titles that may not necessarily be about Easter but either take place around the holiday or have Easter themes. Today I’d like to give you a few suggestions that could possibly become traditional viewings for you in the future. 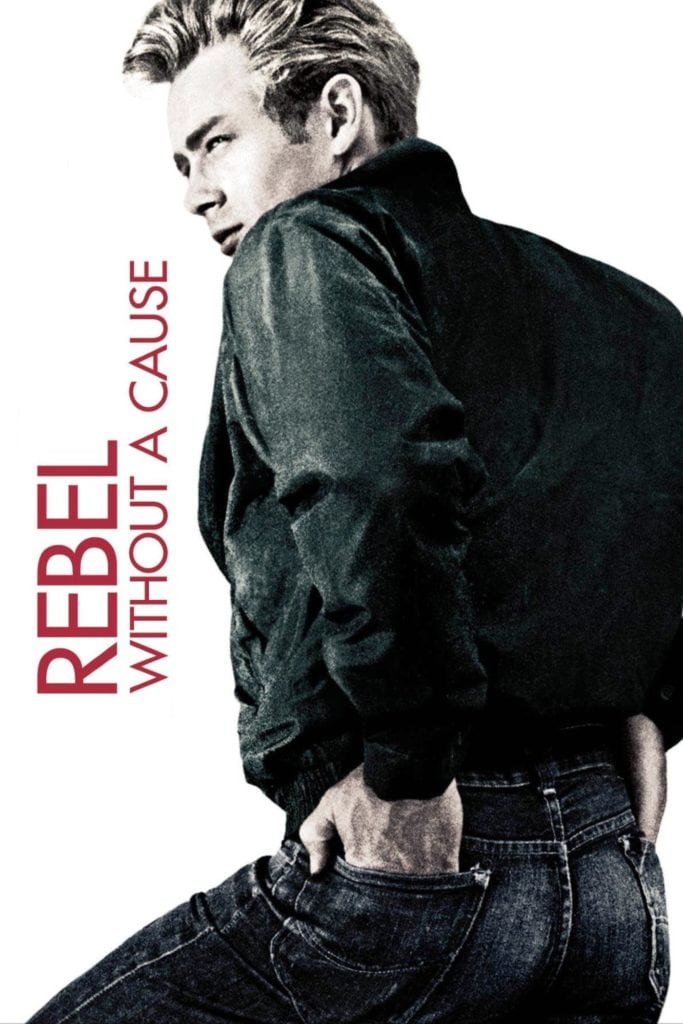 The classic 1955 film REBEL WITHOUT A CAUSE has most certainly become notorious because of the tragic deaths of its three ridiculously attractive stars. James Dean famously died in a car accident one month before the film’s premiere at the age of 24. A couple decades later, in February 1976, co-star Sal Mineo was stabbed during a robbery attempt and passed away at 37 years of age. And leading lady Natalie Wood, certainly one of the most beautiful actresses in the history of Hollywood, died in November 1981 while at sea with husband Robert Wagner and friend Christopher Walken. Her death at 43 remains a mystery.

Watching this film now, one can’t help but be aware of the eventual tragedies of the actors involved. But, back to the subject at hand, how many of you remember that the three characters in the film first meet each other on Easter night?

Dean plays Jim Stark, a troubled young man who has recently moved to a new town hoping to get a fresh start. On the Easter night in question, he is brought to the local police station accused of being drunk where he meets the emotionally disturbed Plato, played by Mineo, and a pretty girl named Judy, played by Wood, with whom he soon falls in love. However, Judy is currently dating the neighborhood tough guy named Buzz, who obviously doesn’t take kindly to Stark’s infatuation with his girl. And trouble ensues…

Although relatively tame compared to today’s violent films, director Nicholas Ray’s REBEL WITHOUT A CAUSE is considered quite influential as a predecessor to so many of the films about rebellious teenagers that would be made during the following decades. James Dean’s impact, in particular, is undeniable, and one can’t help but wonder how much more he could have achieved if he hadn’t died so young, and one also can’t help but be reminded of the more recent tragic deaths of remarkably talented actors such as Heath Ledger and River Phoenix.

This title can currently be rented on Amazon Video, Vudu, Fandango Now, Google Play, and CinemaNow. It can be purchased by clicking on the title above. 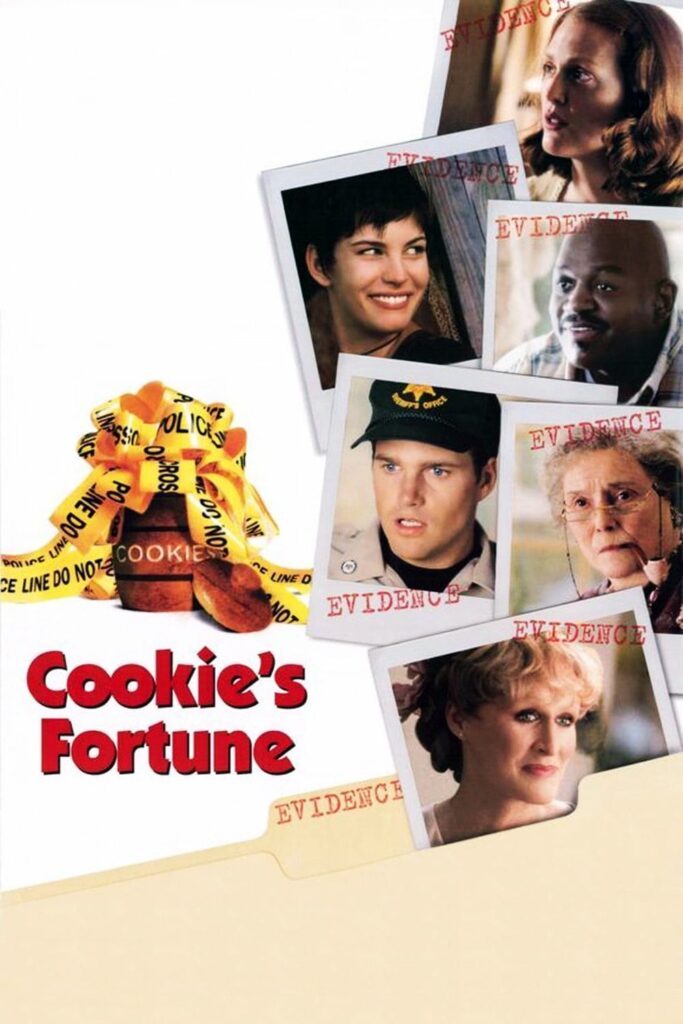 1999’s COOKIE’S FORTUNE, like most of director Robert Altman’s films, is filled with wildly eccentric characters inhabited by an all-star cast. In this movie, we are treated to an ensemble that includes Glenn Close, Julianne Moore, Liv Tyler, Chris O’Donnell and Patricia Neal, among others.

It’s Easter weekend in the small town of Holly Springs, Mississippi. The film centers around Camille Dixon, a pushy theater director who is preparing her latest stage show, set to open Easter night. Camille learns that her Aunt Jewel, nicknamed Cookie, has killed herself. Afraid of how this might tarnish the integrity of her latest masterpiece, she destroys the suicide note and makes the scene look like a burglary. An investigation ensues, and unfortunately, Cookie’s best friend somehow becomes the main suspect. As Easter Sunday finally arrives and the play is finally about to open, the truth comes out and all kinds of secrets are revealed in the process.

COOKIE’S FORTUNE is almost like an episode of “Murder, She Wrote” on laughing gas. That being said, Altman’s films, which include landmarks like NASHVILLE and 3 WOMEN, both on my list of favorite films of all time, are never predictable or by-the-books. Don’t watch this movie expecting a generic comedy or sitcom-like situations. Because of this, Altman is an acquired taste for some, and his films aren’t for everyone.

If you end up watching and enjoying this movie, I might recommend another light Altman comedy, 2006’s A PRAIRIE HOME COMPANION, featuring Meryl Streep, Kevin Kline, Lily Tomlin and too many others to name. This sadly proved to be his last film before passing away, and it is a lovely elegy to a most remarkable career.

This title is currently available to Encore Now subscribers and can be purchased by clicking on the title above. 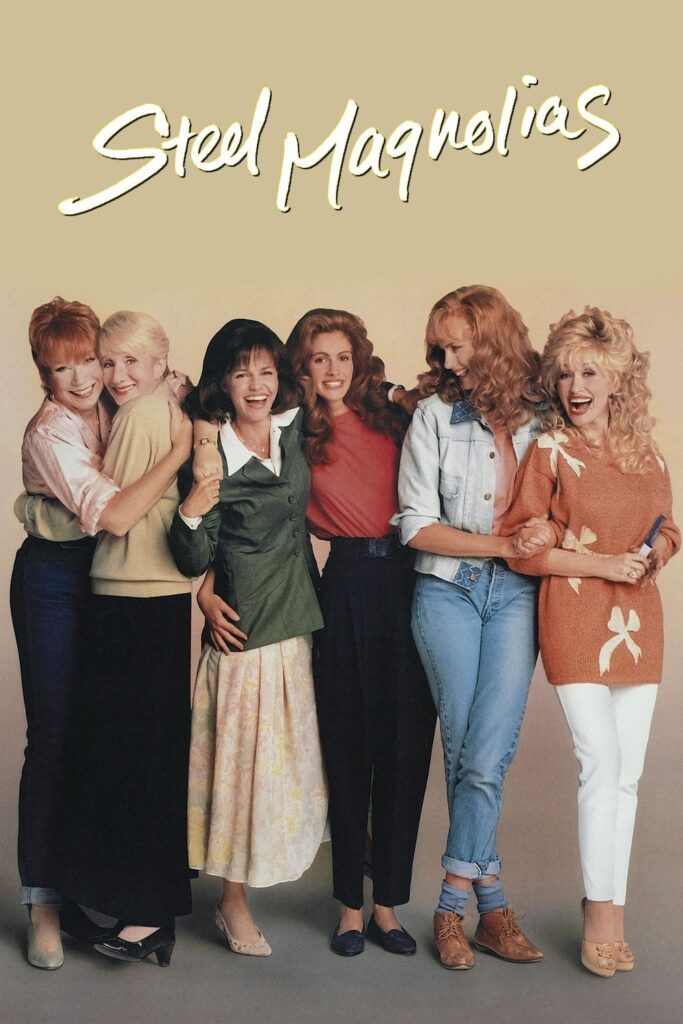 There’s really not much to say about Herbert Ross’s STEEL MAGNOLIAS, the 1989 comedy/drama that has become a beloved favorite of many over the past 25+ years. I’d be willing to venture a guess that most of you reading this blog have enjoyed multiple viewings. I’m sure I would risk serious bodily harm if I tried to convince you that it’s not really that great of a movie, so I won’t even go there. That being said, it’s undeniably enjoyable, containing enough middle-age one-liners to fill a full season of “The Golden Girls“.

For those few of you who haven’t had the experience, Robert Harling wrote the original play and this film adaptation based on his sister, who died of complications from diabetes not long after giving birth to her first and only child. While this is obviously heavy material, Harling fills STEEL MAGNOLIAS with many other characters with much lighter issues. Much of the story takes place at the local beauty shop, where the women gather to laugh, cry, gossip and sometimes even get their hair done.

The film is book-ended by Easter. Toward the beginning of the movie, we witness a million Easter eggs get destroyed when one of the characters inadvertently closes the car trunk while they are being loaded. The end of the movie takes place at a huge Easter egg hunt in which one of the characters goes into labor. The final seconds of the film show a giant Easter bunny on the back of a motorcycle being rushed to the hospital to welcome his first child into the world. I’m sure the filmmakers didn’t include these Easter themes by accident, as the movie is filled with themes involving the tragedy of death transposed against the miracle of life.

Everyone obviously has their favorites character or two – I personally am drawn to Shirley MacLaine’s town curmudgeon Weezer and especially Dolly Parton’s beauty shop owner Truvy. I’ve always thought Parton to be a wonderful and underrated screen presence. I also very much appreciate Tom Skerritt here as he enjoys some wonderfully antagonistic moments with MacLaine. Like I said, not the most brilliantly made film of all time, but you’ll be quoting lines from the movie for years to come.

By the way, skip the misbegotten Lifetime remake. It’s basically the same as this theatrical version but with none of the charm or charisma.

This title is currently available to Starz subscribers. It can be rented on Fandango Now, Amazon Video, Vudu, and Google Play. It can be purchased on CinemaNow or by clicking the title above.

THE 3 MOVIES I MUST WATCH EVERY THANKSGIVING

5 UNEXPECTED HALLOWEEN MOVIE SCENES NOT TO BE MISSED

THINGS WE ACTUALLY SAID THIS EASTER

WHY DO YOU CELEBRATE EASTER? 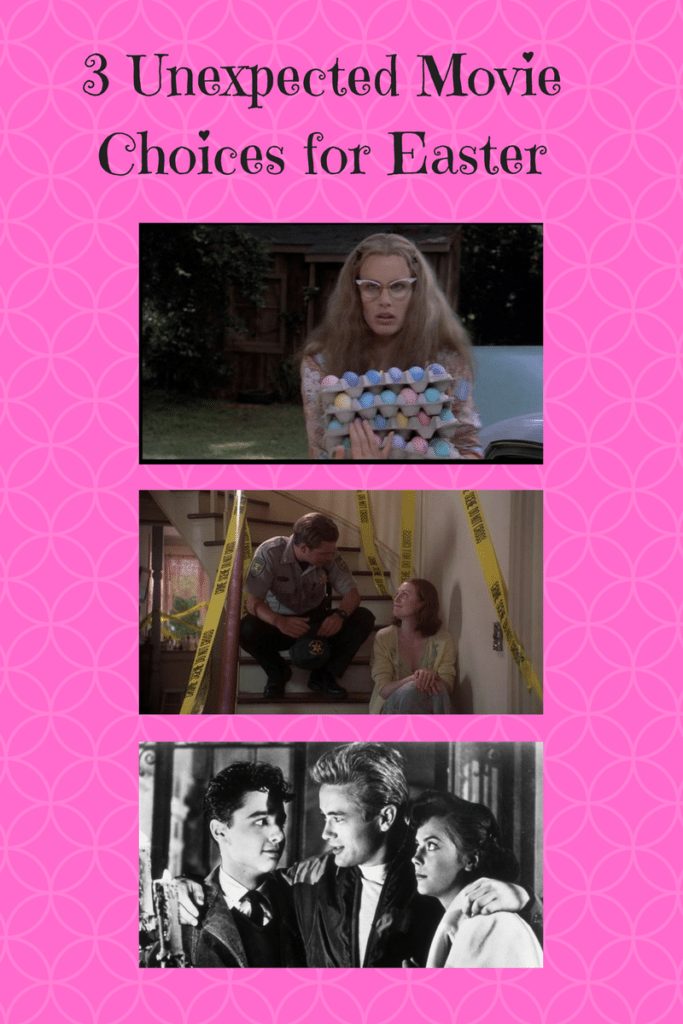