Home » Family » Special Needs Parenting » Living with RAD: There Is Not Enough Love to Fix a Broken Soul

In an effort to educate and bring awareness to the struggle of attachment issues, Reactive Attachment Disorder, and helping children heal from early childhood trauma, over the next months I’ll be sharing stories of families on my website.

For the sake of privacy I’ve changed names and all descriptive details, but let me assure you these are completely real. This story is of Chelsea and Anthony, 14 years old. In Chelsea’s own words, this is Living with RAD: There is Not Enough Love to Fix a Broken Soul.

Please read this with ultimate compassion.

If you are a family with a similar life situation and would like to contribute to this series, click here. 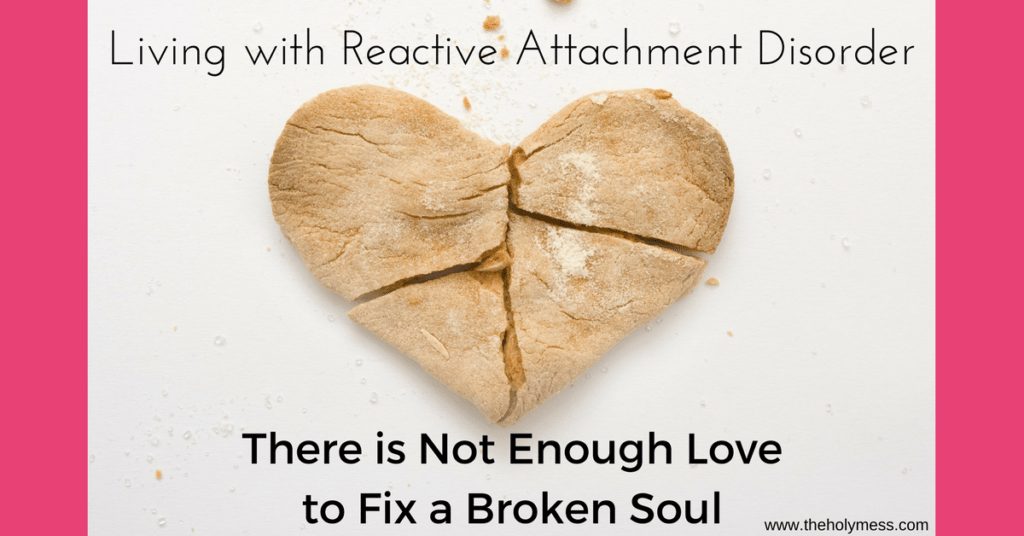 Living with RAD: There is Not Enough Love to Fix a Broken Soul

Anthony came into our lives at 5 1/2 years old.

He was initially excited about being adopted, asking when he could have an “L” name like his brothers. The adoption was finalized shortly after Anthony turned 7. He was brought into our lives by a close family friend who, after 3 months, decided she no longer wanted him.

Anthony was initially so sweet and kind, but even at 6 years old, I noticed he acted different with me than everyone else.

Anthony was charming with other people while cold, calculating and manipulative with me.

By 10 years old, we had to put padlocks on his brothers’ bedroom doors.

Anothony stole and lied. He claimed abuse from me. It was only six months ago, when he was 13 1/2 years old,  that we were given the RAD diagnosis.

How to Deal with Behavior

We’ve successfully parented two other boys, now 21 and 18. To be honest, doing the polar opposite with Anthony than we did with them has been the most marginally successful.

Having dad be the “point man” has worked best. If there is ill behavior, I discuss it with my husband, we come up with a plan, and dad executes it.

Utilizing natural consequences at every opportunity is also successful. We’ve also begun “calling him out” on his behavior as well as bringing it back around to him so he learns to face the consequences of his actions.

A Day in the Life

Our typical day starts with dad waking Anthony for school and me staying out of the way until he leaves for school.

After school, those of us who are at home try not to initiate communication with him. We’ll engage if he initiates conversation, but mostly we stay out of his way. It is a lot like walking on eggshells, never knowing what moment will be “the one”.

What I Wish People Knew About RAD

There are two distinct things that I wish people understood.

I wish they understood that, more often than not, there isn’t enough love to fix these broken souls. We just want to show our children love and affection. Our hearts break everyday when we remember back to the beginning, gazing into their little eyes, thinking we could make them happy.

Secondly, I wish everyone understood the definitions and signs of manipulation and triangulation.

Our son is 14 years old. He has absolutely no friends.

He calls everyone his “friend” but rarely knows their names. He’s never invited to their homes. He’s almost incapable of acting like a 14-year-old boy yet loves to interject himself in every adult situation.

Would I Adopt Again?

I often ponder if I would choose this route again. We weren’t looking to adopt. He was thrust into our lives.

We did what we thought was right.

More days than not, I say NO, I would not do this again. My two biological sons have essentially had their childhoods hijacked. They have suffered manipulation at its finest, and I missed what it was doing to them because I was just trying to survive.

If those were the only factors at play, then that is when the answer is a resounding NO.

However, six years after adopting Antony, we received a call asking if we would take his biological half sister who had just been born. So, if we would have said NO to him, we would never have gotten her.

She comes with her own baggage even as a newborn. In-utero drug use is a nightmare. But she has been the reward for us putting up with all of Anthony’s behavior. We’re absolutely smitten with her and she with us.

However, she is now three, and my husband and I are nearing 50 years old. Our youngest biological child just graduated high school. So, just like RAD put us in a position to not fit in with the typical family friends, we now are raising the equivalent of a grandchild while all our family friends are enjoying empty nests.

I wish people understood that attachment issues are a “wiring” problem in the brain, although many times the behavior is attacking and feels like it is a choice our son is making deliberately.

This is not a choice our child has made. He cannot control it or change it. He can usually only learn to manage it.

I also wish people would see it for what it is – an abusive relationship.

I wish people would take a moment to look at the big picture and see me for the mom and person I am.

I wish people would be less accusatory and judgmental. I wish they had listened and been witness to the things happening rather than dismissing me and making me feel crazy.

Since our diagnosis is fairly new, a little bit of time to grieve would be nice. I need time to heal from this abusive relationship.

I, too, am now suffering. Prior to Anthony, I was diagnosed with depression but managed it well. Now I not only suffer from depression, but also anxiety and secondary PTSD.

It would be significantly helpful if the insurance companies, county, schools and general public would help us get the help we need before Anthony has completely destroyed us and our families, both physically and emotionally.

It would also be helpful if the counties in which these kids were in foster care would train their social workers in RAD. All children in the foster care system should be assessed for RAD. I feel like our lives could have taken a much smoother path had we known about RAD right from the start, instead of 9 years in.

Where I Am Today

Aside from the aforementioned effects RAD has had on our family, it is significant to add that it feels as though the rest of us are all merely holding our breaths and biding time until he turns 18, which is not a fun or healthy way to live.

There are positives. I grew up as an only child. Four of my sisters died shortly after birth, and I have always wanted a big family. I have four children now, so my chances of having a large family are looking pretty good.

I also like to learn. So, all this learning I have been doing with all our diagnoses is somewhat of a positive. I just really never wanted to live these lessons.

In a life with RAD, the answer to “how are you doing?” is constantly changing. I wish that someone understood that there are days when a mom just needs a break, but ironically sending a child with RAD to someone else’s house, while nice initially, comes with anxiety over what he will do while there. It is an exhausting way of life.

Sadly, unless there are some major changes, I see Anthony dropping out of school at 18 years old and leaving home with some “unsavory” friends. I foresee a future of multiple stressful and broken relationships for him.

I am hoping he never becomes physically abusive, but the emotional and psychological abuse will not serve him well.

I am hoping that he remembers how much love and support we poured into him.

Are you living life with a child with RAD (Reactive Attachment Disorder)? Share in the comments below.

Living with RAD: I Still Love Him and I Would Not Wish This Life On Anyone

Attachment Issues: When Family Life is Not Working

I Called the Police for My Own Son…and I’m a Good Mom.