After I had completed my first 5K, I started getting excited about the idea of competing in races. I got the finish line bug! I picked up some books at the library about running, including Jeff Galloway’s Marathon Training

Yes, I knew how far that was. Neither of us had been athletic growing up, and it did seem a bit impossible to me, but I really wanted to try this.

Every Saturday morning I would get up while Mike and the kids were still sleeping, strap on my fuel belt

, and off I would go. I was starting to learn about nutrition and how I needed to fuel myself during exercise for workouts longer than 90 minutes. I drank water and Gatorade. I ate a few shot blocks.

I kept walking and running.

Keep in mind I was not anywhere close to my goal weight at this point, just about half-way. So I had made great progress, but I certainly was not thin.

This day was a dream come true for me! I ran the 2007 Half Marathon (13.1 miles) in downtown Denver. The weather was unbelievably awful! After a fantastic Fall of 70s and sunshine almost every day, it almost didn’t seem possible that race day would dawn with rain and clouds. But rain it did…through the entire race! It actually wasn’t too terrible for running, but it was painfully cold before and after the race. 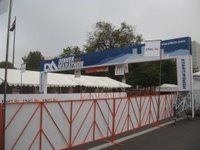 Criss and me at the finish line.

This year was only the second year of the Denver Marathon and there were 10,500+ runners registered for either the 1/2 or Full marathon. It was fun to run through the middle of the streets of downtown Denver. All of the volunteers, spectators, and other runners were so encouraging. Our names were printed on our bib number, and it felt so good to hear someone yell out, “Good job, Sara, looking strong!” That gave me the motivation to keep going when I was really tired.

Miles 6,7 and 8 were the toughest for me mentally. We did a loop in and out through City Park, and I could see all the faster runners leaving the park as I was just going into it…ugh, I felt like I was the last runner in the whole race (even though I wasn’t even close). I had decided to run without music, and I was missing my music right about then…but I just kept on, and getting out the park I started feeling strong again. It never got easy, but it felt a little smoother.

By mile 11 I was feeling exhausted. Mile 11 just felt like it went on FOR-EV-ER! I kept thinking the mile marker for #12 somehow got missplaced, because it never seemed to come.

Finally when I turned a corner and there it was, I was thanking God. Gotta love those double digits! The volunteers at the table at mile 12 were awesome, assuring me it was just downhill to the finish line from there on out. It was downhill but it wasn’t easy. My legs were complaining, but the end was in sight. I could hear the music and crowd cheering at the finish line, and I was also looking at my watch and thinking maybe, just maybe, I would finish in under 3 hours, and that kept me moving. (And okay, the thought of being able to sit down somewhere when it was over, really kept me moving!)

Amazingly I had a little last ooph in me to sprint across the finish. (Hooray, didn’t think I would have it!) and there were more wonderful volunteers offering me water, taking the timing chip off my shoe, and best of all giving me my metal. I walked into the Runner’s finish area, and I don’t think it had quite hit me yet. I called Jill and suddenly started crying. I had really done it! A worker in one of the tents gave me a big hug and was so supportive. That felt awesome. Then I called Criss. (I would have called Mike, but he was still in church — I called him as soon as he was done.)  I walked around the booths in a sort of daze. I just felt incredibly happy and incredibly COLD. I couldn’t stop shivering and couldn’t really feel my fingers at that point anymore. Good thing Criss soon arrived with warm dry clothes. Ahh, that was the best.

One of the best accomplishments of my life!

So happy to have the support of my sweet daughter, Bekah!

Mom and Bekah at the finish line.

After taking pictures we went to Starbucks for hot tea and hot chocolate, and then celebrated with lunch at Hard Rock Cafe. What a great way to finish out the day. We rode the Lightrail home, and then I got to take a hot shower and sit in front of the fireplace — heaven on earth!

I ran the race in just a bit over 3 hrs. (About a 13:45 mile.)  I know by racing standards that is slow, but I was really happy with my time. I had run 13 miles twice in practice, and both times it took 3 hrs, 25 minutes. I was hoping to shave a bit of time off during the actual race, but wasn’t expecting 25 minutes less! I was thrilled! But overall I don’t care about the time, I was just happy I finished on my own two feet and even better, with a smile on my face.

I had overcome so many obstacles to make it to this day, both in the last few years and in the last few weeks. So many times I was tempted to quit, but I just keep doing my best. I didn’t always practice the way I needed to, but I never gave up. I thank God that He gave me the strength to accomplish my goal. 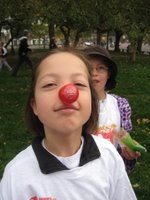 Bekah shows off her circus nose 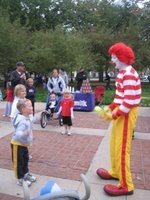 Josiah got to juggle with Ronald. 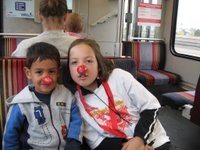 Bekah and Paul on the “train” (the lightrail). 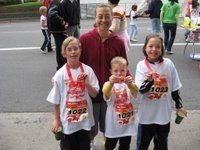 On Saturday we went to the kids’ run. Rebekah and Kiersten ran a 1/2 mile and Josiah ran a mini-mile. They all got t-shirts and a kids’ finishing medal. They did a great job!

Next up in the 100 lbs lost series: My First Triathlon!

Have you completed an event that you once thought was impossible? What made it so you were able to accomplish your goal?