Getting to the Starting Line

In January when I started training for my first triathlon, I knew I would face some challenges, but I had no idea just how many. Struggling with hamstring tendinitis (which isn’t gone but is in recovery), seeing a sports doctor, physical therapy, hours doing PT exercises at home (still doing those), babying it, sports massage, taking time off from running….it was a frustrating experience for sure, but I did grow and learn.

Then came the humbling experience of starting swim practice. Apparently taking 20 years off from swimming isn’t such a good idea. I knew I was rusty, but had no idea I wouldn’t be able to swim even a pool length. I ended up in tears at my first swim practice and Coach Susan had to calm me down. Those first weeks of swim practice were so hard and so discouraging. If it weren’t for the assurances of Coaches Bree and Susan that come race day I WOULD be ready, I seriously don’t think I could have kept on going. It seemed impossible to me. I cried in the car on the way to every swim practice, I disliked it so much. But slowly (oh so very slowly in my mind), it began to come together. I am still not a strong swimmer, but I am able to go the distance.

Just as I was feeling everything was coming together well, I had a scary experience. A short summary is that I was told I might have a potentially fatal heart rhythm problem. I went through tests and spend two heart-breaking weeks waiting for results. During that time of waiting I thought my life as I know it was over. I missed my first team practice triathlon, too, which was a terrible disappointment. The good news is that while my doctor feels there might be a tiny bit of risk, it’s small enough that I could return to life as normal. Praise God! I worked my way back into my training and all was well. The rest probably did me more good than I even realized, since I have a tendency to over-train.

Next came open water swimming. Let’s just say it’s a whole new world out there, and it’s really different from the pool! After the heart scare I decided to purchase a wetsuit as an extra measure of protection, and it was a great investment. I’m so very glad to have it. It keeps me warm(er) and best of all it helps me float and swim faster! Getting into the wetsuit is a workout all by itself, but I’ll spare you those details.

A week before I was set to do my first official triathlon, my triathlon team hosted a practice race — the full race course at the race sight. I went into it feeling pretty confident, perhaps overly confident. The water was very cold and very choppy — and I panicked.

I was able to make it through the swim, but just barely, and I had to be pulled along hanging onto a lifeboat for awhile. This experience totally shook my confidence in the swim, but in the end it was the best thing that could have happened, because it helped me prepare for the swim in a whole new way. I spent a lot of time week before the race focusing on relaxing, staying calm, keeping “in my circle” (as we say on the Team).

Despite many challenges, I didn’t quit. My stubborn streak does come in handy sometimes! I made it to the starting line…let’s do it!

Mike and I woke up at 4:15 to head to the race. I was nervous but not overly so. The parking was about a mile away from the transition area. I got a great transition spot and had plenty of time to set up, plus walk around and see where all the entrances and exits were, use the porta potty (3 times, all that hydrating!) and get my bearings. 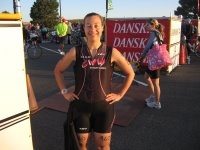 In my Tri suit, body marked and ready to start the race. I love my tri suit — pockets to hold my stuff and I can wear it for all 3 events without having to change clothes. It dries really fast after swimming. 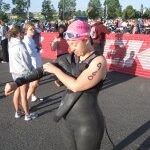 Getting into the wetsuit is the hardest part by far — but, it’s worth the effort! 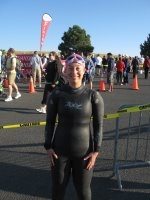 Soon it was time to wiggle into the wetsuit and get ready to roll! I got a good-luck kiss from Mike and went down to the water to warm up. The race had started at 7:00 and my wave at 7:40, so lots of waves had already gone by the time it was my turn. I couldn’t believe this was really happening. My first Tri was really starting! I focused on staying calm and cool. I slapped a high five to Sally Edwards (athlete spokeswoman for the Danskin series) and the announcer counted down to “Go!”

I waited back a bit until the crowd had gone, and then I got in. The swim was shorter than originally planned due to the water temperature being cold. I wasn’t sure whether to be relieved or disappointed about the shorter course! With swimming not being my strength, I was happy, but on the other hand I know I could have gone the distance. Regardless, the swim went GREAT for me. I stayed totally calm the whole time and was able to see and hear everything going on around me. I was able to sight with no problems. When I was nearing the beach on the return, I almost started crying because I was so happy, but realized that might mess up my swim calm so I stopped myself!

Transition went quickly, and then I was on to the bike. The bike is my favorite and strongest event. Despite being on a heavier mountain bike I passed lots of people. The course at Aurora Reservior is very hilly and we hit a strong head wind on the way back. I was very thankful Jan and I had practiced hills a lot in the last few months. Despite the hills I felt I finished the bike portion strong and was ready for the run. 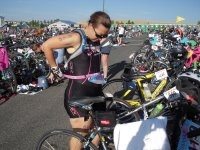 The run was the biggest challenge. Even though I came into this season with experience running, with all the injuries I hadn’t spent nearly as much time running as I would have liked. And, I was getting TIRED. I kept up my nutrition and hydrating though which helped. I probably ran about half of the run portion and walked the other half. I was hoping to run the whole thing but it wasn’t in the cards for me.

I Am a Triathlete

The best part about the run was coming into the finish line area. It was so exciting! I could hear the announcer and the music, and it motivated me to push to the finish. I really and truly was almost done with my first Triathlon, wow! It was great fun to run into the finish with so many people cheering. Right after the finish line I saw Mike and the kids, and then Kathy was there. It was one of the greatest moments of my life! I am a Triathlete! My finishing time was 1:38:21. 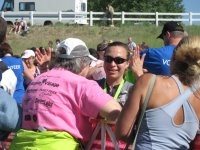 High fives from my friends and neighbor Kathy. 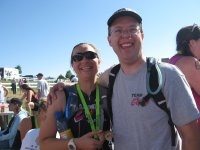 With Mike at the finish line, my best support and cheerleader. I couldn’t do it without him! 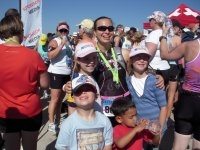 At the finish line with my 4 of my reasons for getting healthier — I hope I can continue to be a good role model of fitness for my kids!

I love the medal. On the front it lists the distances and on the back it says “The woman who starts the race is not the woman who finishes the race.” 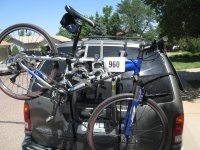 My trusty bike. I was riding a mountain bike for this race. 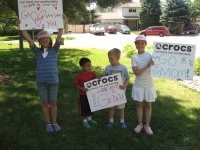 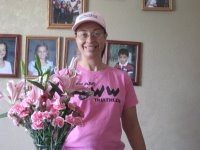 My mom and Dale sent me these flowers. Thank you! So sweet.

What is an accomplishment you have finished about which you feel successful?