Here are 2 ingredient dough cinnamon rolls that are low in calories and WW points. Is there anything better than a warm, ooey-gooey cinnamon roll? This 2 ingredient cinnamon roll recipe delivers just that. These delicious, warm rolls are super-popular with Weight Watchers members and people who want a healthier alternative to a typical high-calorie cinnamon roll.

This 2 ingredient dough cinnamon roll recipe doesn’t have yeast so it’s easy to whip up for a special breakfast. 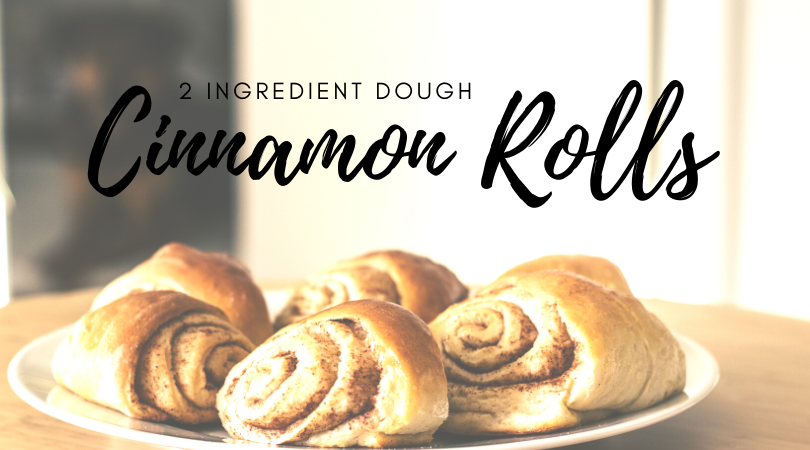 Do you need to eat low carb or gluten-free? Be sure to check out our low carb 2 ingredient dough recipe and vegetarian variations, too.

What is 2 Ingredient Dough?

If you haven’t tried a 2 ingredient dough recipe yet, now is the time.

These recipes are a huge hit with the Weight Watchers members because each serving is just 2-3 points.

Two ingredient dough is a mixture of self-rising flour and Greek yogurt. That’s it! It is quick and simple to make. This yeast-free dough can be used to make the 2 ingredient cinnamon rolls, pizza, bagels, pop tarts, and so much more.

As you begin working with this dough, here are a few helpful tips to keep in mind.

Do You Have Sticky Dough?

Did your dough turn out really sticky? After making the dough, let it rest for a while in the fridge. I’ve made this recipe plenty of times and placing the dough in the fridge helps. You can also add more flour if your dough is too sticky to work with, but keep in mind this will increase the calories/points.

The classic yogurt dough recipe is equal amounts of plain, non-fat Greek yogurt and self-rising flour. You can try to use less of the Greek yogurt than what the original recipe calls for if your dough is sticky or you are having trouble rolling it out.

How Do You Store the Dough?

If you don’t want to use all the dough right away, place the dough in a bowl with some plastic wrap over it and stick in the fridge.

This dough can also be frozen. Wrap dough ball in saran wrap, seal in a freezer bag and place the dough in the freezer until you ready to use it. Thaw in fridge overnight before using.

Here is the recipe for cinnamon rolls using 2 ingredient dough. You’ll find some variations in how people make these rolls, but here’s a great basic recipe to get you started.

One of the biggest differences in yogurt dough cinnamon roll recipes is if you use real sugar or artificial sweetener. Artificial sweetener will lower the points or calories in your recipe, but not be as natural and some people feel it gives a bit of a bitter flavor. 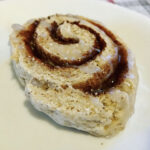 Print Recipe
No ratings yet

WW PersonalPoints™: Click here to track this recipe in the WW app. WW points - 5 points per roll on MyWW Green, Blue, and Purple.

The SmartPoints® or PersonalPoints value of these recipes was calculated by this web site and is provided for informational purposes only. This is not an endorsement, sponsorship or approval of this web site or its recipes by WW International, Inc. 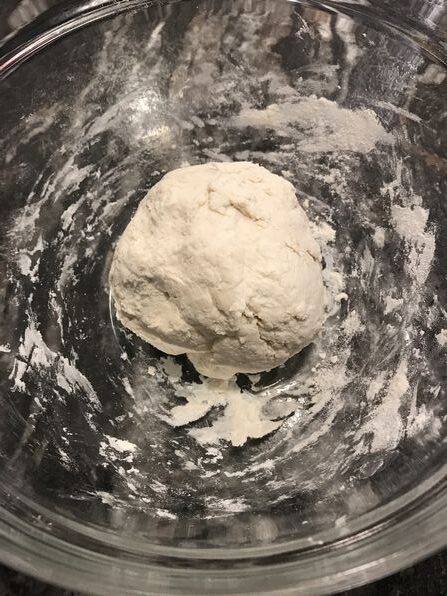 Combine flour and yogurt until mixture forms a ball.

If your dough is too sticky, gradually add more flour but keep in mind this will increase points.

Alternately, you can add half the amount of required yogurt to begin and gradually add more until the dough is the correct consistency. Since you need to work with this dough, you want to be sure it’s able to be worked. 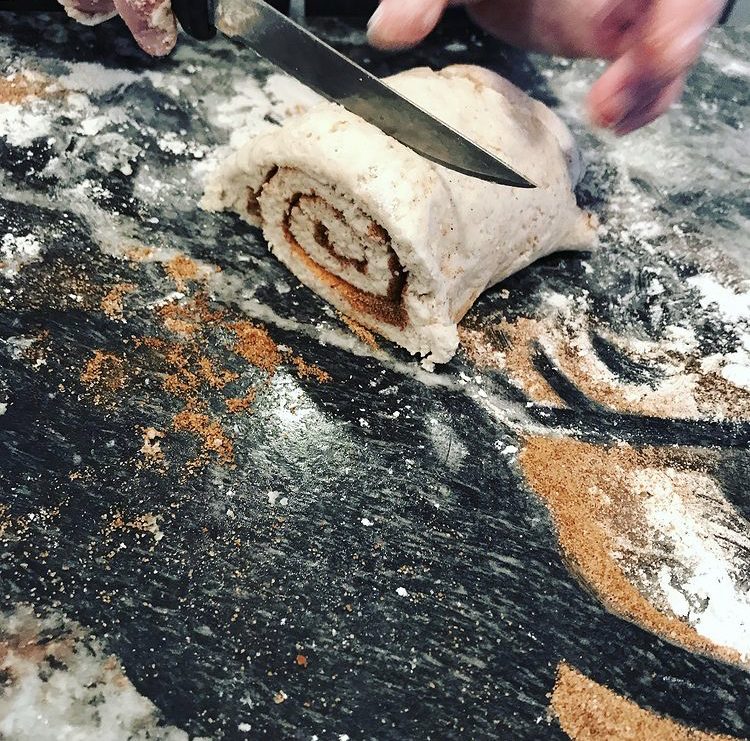 Roll out dough, sprinkle with cinnamon sugar mixture, then gently slice into rolls.

Rolls can flatten during cutting if handled too roughly. Try using a serrated knife and cut with a sawing motion. If rolls flatten during slicing, simply re-form into a round shape on baking sheet. 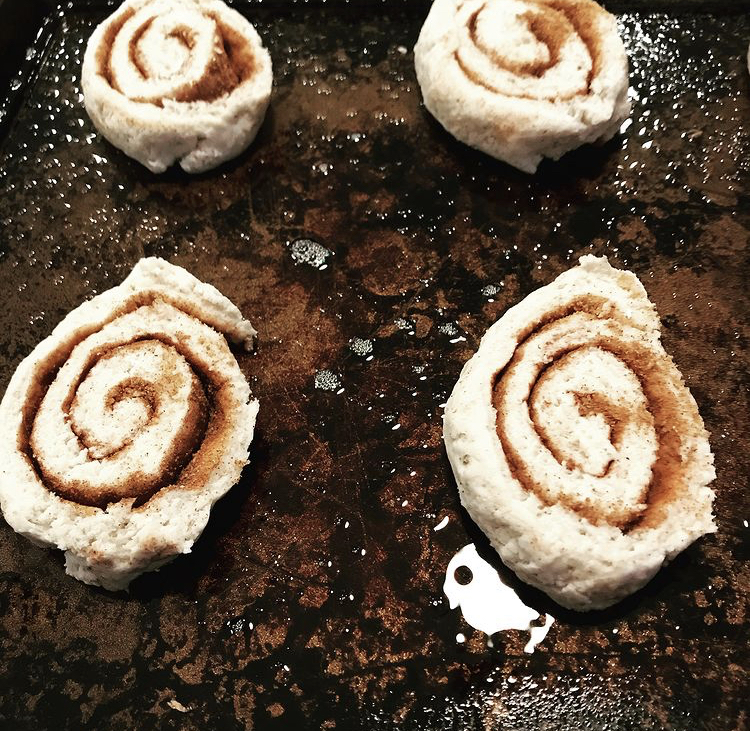 Spray pan or cookie sheet generously with cooking spray. You can arrange rolls separately (for more firm sides) or touching (for softer edges). 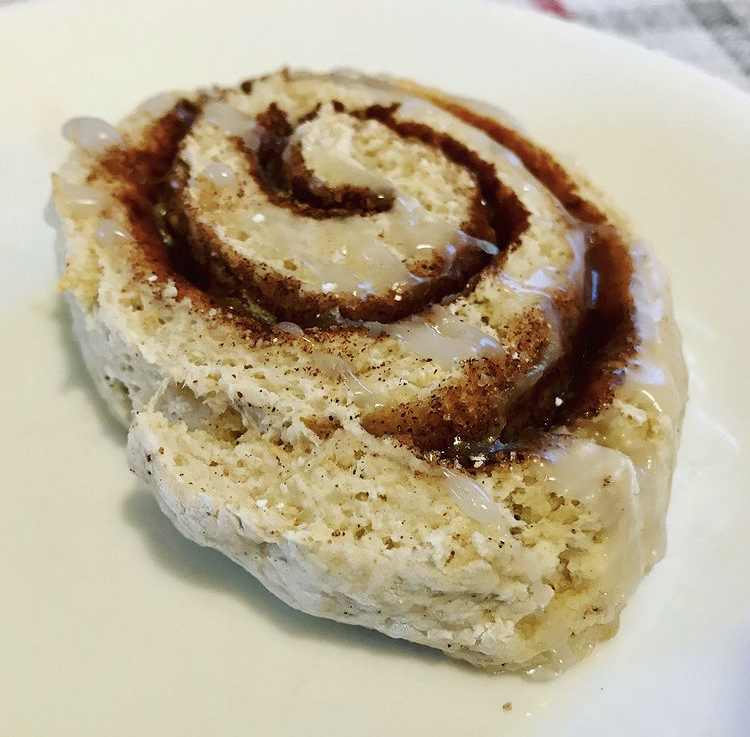 After baking, your cinnamon roll is ready to be enjoyed!

These are best fresh but can be re-heated in microwave or frozen to save for later.

Here are a few recipe variations that we can’t wait to try.

WW shares a simple cinna-stick variation. These are much faster and easier to make that rolls.

Emily Bites offer this pumpkin cinnamon roll recipe that would be especially good in the fall when pumpkin flavors are all the rage.

Back at it with that 2 ingredient dough! These cinnamon rolls are a serious game changer! Super QUICK and easy to make! Oh.. and don’t forget that cream cheese frosting! Check out the recipe on my blog (link in bio)!

For those of us following the WW program, these lower point rolls are a game-changer because they are 3-5 points per roll (points vary depending on the recipe and if you use sugar, sweetener, or a combo) compared to a typical cinnamon roll with much higher points. Take a look at the difference.

The Cheesecake Factory Cinnabon Cinnamon Swirl Cheesecake – 69 points per slice (I know a slice of cheesecake is not a fair comparison, but I had to throw that one in there to show you the points shocker!)

Can You Make Weight Watchers Cinnamon Rolls Ahead Of Time?

The rolls can be made ahead of time and kept in the refrigerator or even the freezer if stored appropriately.

Keep the dough in the fridge no more than 2 days before letting come to room temperature before you bake. If you don’t want to use the dough right away, wrap it in plastic wrap that has been sprayed with cooking spray and store it in the fridge for up to 2 days.

To freeze, wrap carefully in saran wrap and then foil or in a ziplock bag. For best results, thaw before baking.

Keep in mind the finished cinnamon rolls won’t be as puffy as their yeasted cousins, but they are still plenty soft and have a great texture.

Keep your baked rolls in the refrigerator, carefully wrapped to prevent drying out, for no longer than 2 days. When you are ready to eat one, pop it in the microwave for 20 seconds and enjoy.

Here’s a free 2 ingredient dough cheat sheet for you to use. 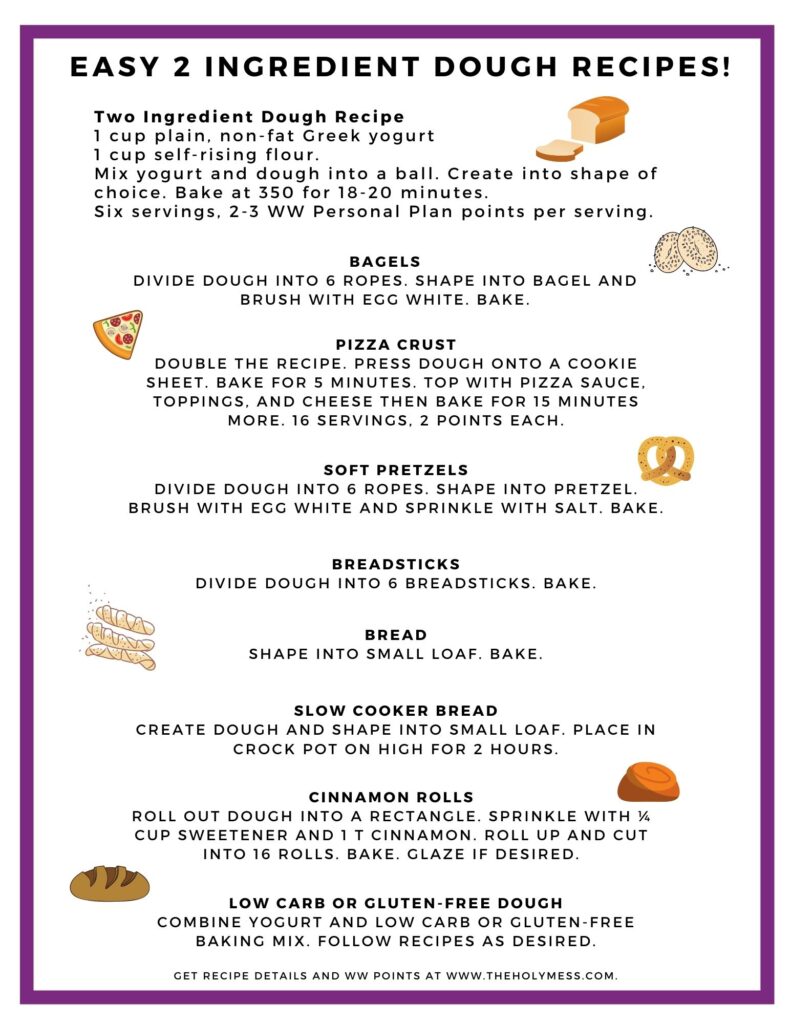 More Recipes You Will Enjoy

Slow Cooker Two Ingredient Dough Bread Recipe – Are you looking for a quick, easy bread recipe that’s low in calories, full of protein, and easy to make? Check out this slow cooker 2 ingredient dough bread recipe. This 2 ingredient dough is super-popular with Weight Watchers members because it’s low in points and easy to make. This crockpot version is especially easy and delicious. This dough is fun for kids and adults to make because it comes together so easily.

Weight Watchers Two Ingredient Dough Recipe -This 2 ingredient dough recipe is a versatile, easy recipe for making a variety of breads like bagels, pizza crust, calzones, and more. With it being hard to get to the store or even with bare store shelves, having this two-ingredient bread recipe will be a lifesaver for you and your family.

Low Carb 2 Ingredient Dough Recipe -Are you looking for a bread recipe that is low in carbs and easy to make? Check out this amazing low carb 2 ingredient dough recipe that can be made into bread, bread sticks, bagels, pizza crust, and more. This is a low carb variation on a popular Weight Watchers two-ingredient dough and you will love how quick it is to pull together. Whether you are following a Keto, Paleo, Low Carb or Atkins diet, or simply want to eat fewer carbs for healthy or personal reasons, this dough recipe will work for you.

10 WW Recipes Using Ingredient Found In Your Pantry -Are you in a situation where fresh food isn’t available and you need to come up with dinner quickly? These 10 WW Recipes Using Ingredients Found In Your Pantry will be a lifesaver when you must cook meals with only ingredients found in your pantry. While we know that fresh, whole produce and ingredients are the best, there are times when it’s not available, you need to stretch your grocery budget a few more days, or getting to the store simply isn’t an option. That’s where these WW recipes come in handy. You’ll be able to make healthy foods and stick to your Weight Watchers points.

WW Pizza Made With Two Ingredient Dough -Who loves pizza? These delicious Weight Watchers pizza recipes are perfect for MyWW members who love pizza but don’t want to spend all their day’s points on just one or two slices. We start with our super-easy, no-yeast two ingredient dough and use it for crust, then we give you a wide variety of topping options so you can create a pizza you love for just 3-4 points per slice.