Home » Family » Movies » Mickey’s Magical Christmas: Snowed in at the House of Mouse

On the tenth day of Christmas, my true love gave to me: 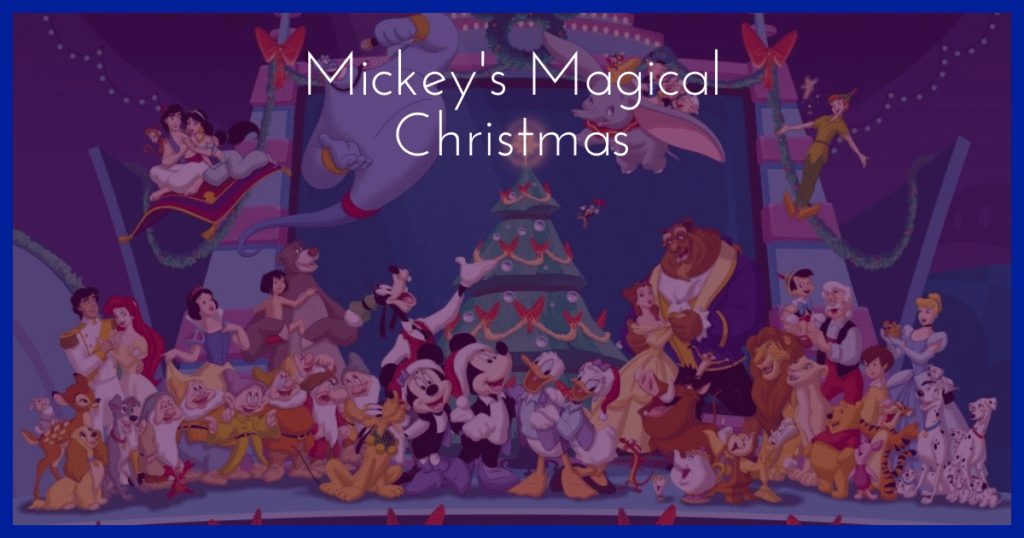 Mickey’s Magical Christmas: Snowed in at the House of Mouse

I can’t properly and completely convey to you the ridiculous pleasure I have watching this Christmas movie without being completely vulnerable and honest, giving you a small peek into the extreme dorkiness that is me.

Grab yourself a drink and get comfortable.

For as long as I can remember and continuing through my current life as a 40-something adult, I have always imagined backstories for cartoon characters. And I have always considered this an example of my extreme creativity rather than exhibit 82 in my commitment hearing.

In other words, in my world, the cartoons and animated films we see are actually performed by cartoon actors. Just like we humans get along with some people better than others, the same holds true for cartoons characters.

For example, even though Bugs Bunny and Daffy Duck are more often than not antagonistic toward each other onscreen, I have always imagined them behind the scenes to be very good friends and obviously very good actors. Same with Sylvester and Tweety. 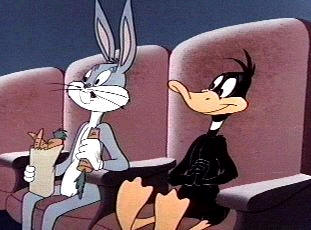 Bugs and Daffy – Bitter enemies or best of friends?

That being said, I’ve always thought there was backstage friction in the Hall of Justice between Batman and Robin while making Hanna Barbera’s Super Friends, and I still feel to this day that Fred Flintstone and Barney Rubble couldn’t stand each other in real life.

Why am I bringing this up and potentially subjecting myself to lifetime ridicule? Because In MICKEY’S MAGICAL CHRISTMAS, subtitled SNOWED IN AT THE HOUSE OF MOUSE, we see the whole arsenal of Walt Disney characters gathered together in a social setting, just like real actors at an awards show or celebrity gathering, and the results make me almost giddy.

The movie begins at the tail end of a Christmas Eve program at the House of Mouse. As everyone prepares to head home, they realize there’s been a terrible snow storm during the show, and there’s no way they’ll be able to make it home safely. So Mickey and friends decide to throw an impromptu Christmas party, featuring live music provided by Hewey, Dewey, and Louie and an hour’s worth of movies featuring all the great Disney characters.

I mean, seriously, the movie itself is just fine, but it’s basically just an excuse to show a bunch of the oldies but goodies. That being said, they truly don’t make them like they used to, and while I don’t consider Mickey and Goofy and Pluto quite on the same level as Bugs and Elmer and Yosemite Sam and all the Warner Brothers gang, the film brings back wonderful memories for us older kids at heart and can hopefully convert newer fans who are only used to the meager offerings on Nickelodeon and Cartoon Network.

And allow me one more opportunity to fanboy geek out. Seeing the wicked stepmother from CINDERELLA and the evil queen from SNOW WHITE at a table next to the crocodile and elephant from FANTASIA watching a Chip and Dale Christmas cartoon is the biggest embarrassment of riches one could ask for and a wonderful addition to the holiday season.

And by the way, let’s just keep this review between you and me, OK? I don’t want anyone else thinking I’ve totally popped my gasket!

MICKEY’S MAGICAL CHRISTMAS is currently available for streaming to Netflix subscribers, or you can purchase it by clicking here.

Tomorrow, we review a film that looks at the ways Hollywood has celebrated Christmas onscreen and off.